U.S. Women’s Open live blog: Follow along as we crown the final major champ of 2020 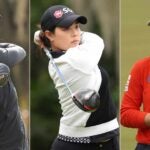 Amy Olson (from left), Moriya Jutanugarn and Hinako Shibuno are in the final grouping on Monday.

We’ll have to wait one more day to crown the final major champion of 2020. The final round of the U.S. Women’s Open was suspended on Sunday after heavy rain hit Champions Golf Club in Houston, Texas, and the event will now finish on Monday.

The final round airs from 9 a.m to 3 p.m. ET on Golf Channel. We’re also tracking all of the action here, so follow along to see who comes out on top.

— Tee times
— Leaderboard
— Staff picks to win
— Column: Why Monday can’t come soon enough
— How players made the most of Sunday’s suspension

(All times ET; refresh for updates)

1:50 p.m.: And that’s a wrap! Thanks for following along and make sure to check out GOLF.com for tons of post-round coverage coming right up. Congrats, A Lim Kim!

2:46 p.m.: And another nice finish in this group with Amy Olson draining a birdie putt on the 72nd hole. That’s a one-over 71 on the day, good for two under overall and a tie for second. Olson and Jin Young Ko both finish a shot back of winner A Lim Kim.

2:44 p.m.: A nice finish for Shibuno, who rolls in a long birdie putt on 18 to shoot 74 and finish one under for the tournament. She was the 54-hole leader coming into the day.

2:40 p.m.: And…. that’s basically a wrap. Amy Olson needs to hole her approach from 122 yards, and she hits a good one, but that’s not gonna go in. She has a birdie putt coming up, but A Lim Kim is your U.S. Women’s Open champion!

2:24 p.m.: Olson misses the green on 17 and can’t knock it from there, can cleans up her par. She’ll need to hole-out with her second shot on the par-4 18th to tie A Lim Kim, so this thing is all but over at this point.

2:10 p.m.: Uh oh, Olson fails to get up and down on 16 and makes bogey, dropping to one under. She’ll now need to go birdie-birdie to watch A Lim Kim.

1:57 p.m.: For the record, A Lim Kim started the day five shots off the lead. Now the solo leader. Final group playing the 15th now. Olson just missed a birdie try and made a tricky comebacker for par. Three to play and she’s still down one.

1:49 p.m.: Wow! A Lim Kim rolls in her third straight birdie and she signs for a four-under 67. She closed with birdies on 16, 17 and 18 and is now the solo leader and clubhouse leader at three under. Olson is two under with four to play and now must make at least one birdie to catch A Lim Kim.

1:34 p.m.: And here comes A Lim Kim! She makes her second straight birdie on 17, and she’s now tied with Olson for the lead at two under with one to play.

1:15 p.m.: Birdie for A Lim Kim at 16 and she’s now moved to one under and one off the lead. Clubhouse lead is Inbee Park at two over, so getting in at one under, or even par, would put players in a pretty good spot given these conditions.

12:51 p.m.: Shibuno is struggling now and just made her second straight bogey. Meanwhile, Olson two-putts for par on 11, sits at two under and leads by two. A Lim Kim, Jin Young Ko and Shibuno are all tied at even par.

12:36 p.m.: Olson, by the way, is looking for not only her first career major title, but her first career LPGA victory. She’s also playing a couple of days after her father-in-law suddenly passed away over the weekend. More on that here.

12:30 p.m.: Olson pars the 10th and Shibuno drops back with a bogey, so Olson is now the solo leader with eight holes to play. What a finish this is turning out to be.

12:12 p.m.: On to the back nine! Pars at the par-5 9th for Olson and Shibuno and they head to the back nine two under and leading by two. Juranugarn got in trouble on the 9th and hit a tree when trying to punch back into the fairway and made bogey. She and two others are at even par.

11:48 a.m.: Pars for Olson and Shibuno on the 8th, and they still lead at two under. Three more at one under (including Moriya Jutanugarn, who is in their group), and amateur Kaitlyn Papp is even par.

11:35 a.m.: And now Shibuno bogeys the 7th and drops to two under, and Olson and Shibuno are now tied for the lead at two under through seven holes. Two others at one under.

11:14 a.m.: Uh oh, here comes Amy Olson! Two birdies in a row after three straight bogeys and she’s now tied for second, one off the lead through six holes.

11 a.m.: Lots of action on the 5th hole! Shibuno blades a wedge over the green, but even with a bad lie somehow gets up and down to stay at three under. Olson also broke her bogey streak by making a long birdie putt to get to within two. A few groups ahead, A Lim Kim has stayed hot and birdied the 8th, and she’s now alone in second place at two under.

10:40 a.m.: Olson now bogeys her third straight and drops to even par. Shibuno makes par and stays up by two.

10:35 a.m.: A Lim Kim leaping up the leaderboard now. She made four straight pars to start the day and has now birdied 5 and 6 to get to one under and is tied for second, two back.

10:30 a.m.: Shibuno finds the middle of the green on the par-3 4th, while Olson and Jutanugarn both miss and are hung up on the fringe. Will be tough pars for everyone here.

10:20 a.m.: Shibuno and Jutanugarn two-putt for par and Olson bogeys after missing the fairway and having to punch out. Shibuno now leads by two at three under, with Jutanugarn and Olson 1 under and four at even par.

10:14 a.m.: Shibuno and Jutanugarn both find the par-4 3rd in regulation but Olson missed the fairway and had to punch out. So she’ll have a long bogey putt coming. In the group ahead, Ko found the bunker on the par-3 4th.

10:04 a.m.: Shibuno mades bogey, but she’s still leading by one since Amy Olson three-putted for bogey. Shibuno now leading at three under, Olson two under and Jutanugarn, who two-putted for par on 2, at one under. A large group of players are still in the mix at even par. Among them is Lydia Ko.

9:53 a.m.: Uh oh. Shibuno misses the fairway right on the par-4 2nd hole, then hits a tree trying to punch out. Not sure if she has a clear angle to the green with her third here. … Pretty good shot from Shibuno from about 140, having to hook it around some trouble, and it runs just off the green and she’ll have about a 20 footer. But her playing partners both reached in regulation and Jutanugarn has a good look at birdie.

9:44 a.m.: And… we’re off! The final group has teed off in chilly Houston. Temps are in the mid-40s today. Lots of winter coats out there. All pars for the first group. Get your stocking hats on.

Amy Olson is in the final grouping and in contention to win the first major of her career when the U.S. Women’s Open resumes on Monday at Champions Golf Club in Houston, Texas. The 28-year-old will also be playing with a heavy heart. Her father-in-law, Lee Olson, died unexpectedly on Saturday night. Golfweek first reported the news, which was confirmed by the LPGA on Olson’s behalf.

According to Golfweek, Olson’s husband, Grant Olson, flew into Houston over the weekend with his wife in contention to claim her first LPGA victory, but he since went back home to be with his family. Grant and Amy Olson both attended North Dakota State University in Fargo, N.D. Grant works as the linebackers coach for the Bison football team.

Amy Olson was one of 18 players who never teed off for their final round on Sunday due to inclement weather. She’s in the final group along with 54-hole leader Hinako Shibuno and Moriya Jutanugarn and will tee off at 9:25 a.m. ET on Monday. Shibuno sits at four under, with Olson one back at three under and Jutanugarn and Ji Yeong Kim2 at one under.

Amy Olson’s best finish in a major was a T2 at the 2018 Evian Championship. The final round of the U.S. Women’s Open airs at 9 a.m. ET on Golf Channel on Monday.

U.S. Women’s Open live coverage: How to watch Round 4

The final round begins at 9 a.m. ET on Monday on Golf Channel, although Golf Channel’s Morning Drive will have pre-tournament coverage beginning at 8 a.m. The broadcast is scheduled to finish around 3 p.m. ET. Streaming the final round is also available on GolfChannel.com with a cable subscription.