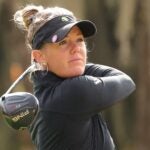 Amy Olson watches a tee shot during the third round of the U.S. Women's Open on Saturday.

Amy Olson is in the final grouping and in contention to win the first major of her career when the U.S. Women’s Open resumes on Monday at Champions Golf Club in Houston, Texas. The 28-year-old will also be playing with a heavy heart. Her father-in-law, Lee Olson, died unexpectedly on Saturday night. Golfweek first reported the news, which was confirmed by the LPGA on Olson’s behalf.

According to Golfweek, Olson’s husband, Grant Olson, flew into Houston over the weekend with his wife in contention to claim her first LPGA victory, but he since went back home to be with his family. Grant and Amy Olson both attended North Dakota State University in Fargo, N.D. Grant works as the linebackers coach for the Bison football team.

Amy Olson was one of 18 players who never teed off for their final round on Sunday due to inclement weather. She’s in the final group along with 54-hole leader Hinako Shibuno and Moriya Jutanugarn and will tee off at 9:25 a.m. ET on Monday. Shibuno sits at four under, with Olson one back at three under and Jutanugarn and Ji Yeong Kim2 at one under.

Amy Olson’s best finish in a major was a T2 at the 2018 Evian Championship. The final round of the U.S. Women’s Open airs at 9 a.m. ET on Golf Channel on Monday.