How cool is this? Women of yesteryear, and JoAnne ‘Big Mama’ Carner, make debut U.S. Senior Women’s Open one for the books 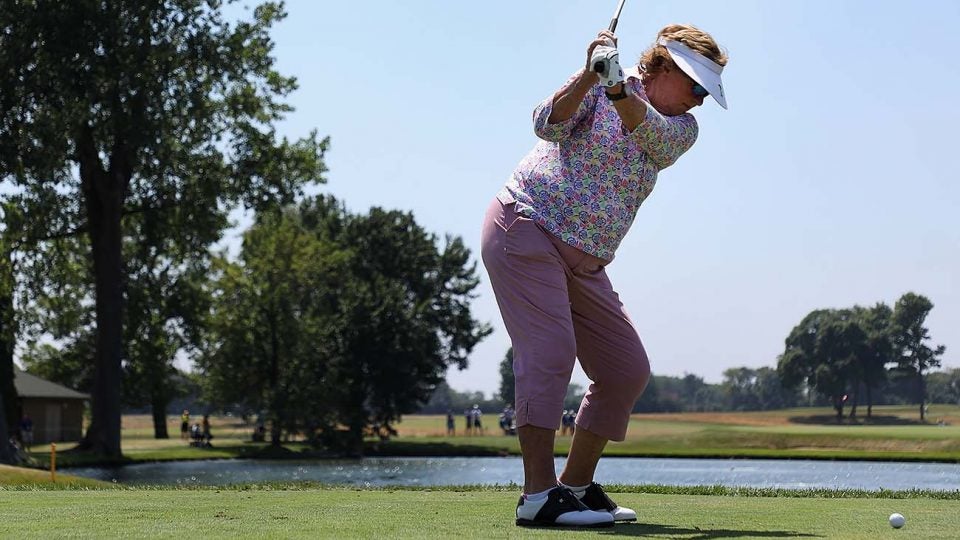 JoAnne 'Big Mama' Carner lets it fly on No. 10 on Friday.
Getty Images

All of golfdom was atwitter: After opening with an age-matching 79 in the first round of the first U.S. Senior Women’s Open on Thursday—on the sublime and ageless links of the Chicago Golf Club—what would Big Mama do next?

Would the great JoAnne Carner, the Hall of Famer competing against women 29 years younger than she, go low (or lowish) again on Friday and make the cut, set up for the ladies as a par-73 at 6,100 yards?

Weekend golf would be limited to the top-50 players and ties and a best guess was that Carner would need to break 80 again to have a chance to qualify for the third and fourth rounds. The oldest golfer to make a cut in the men’s U.S. Senior Open was Jerry Barber, who did it in 1992, as a kid of 77. The Great Gundy (as JoAnne Gunderson was known when she won the first of her five U.S. amateur titles in 1957) would have JBarb by two full years—if she could make the required score.

Friday was hot in Wheaton, the tony Chicago suburb where CGC is located. (Golf purists throughout the world started to take notice of this sleepy perfect course decades ago when Ben Crenshaw played it, became one of its 150 members and started citing it often as he got ever deeper into his architecture business.) The range of play was wide from the 120 50-and-over women competing in the inaugural event.

Carner, who won the U.S. Open in 1971 and 1976, was playing with two other Open winners, Hollis Stacy and Sandra Palmer. (How cool is it to see those three names together back in circulation?) In fact, it was Palmer whom Carner defeated in ’76, at Rolling Green, outside Philadelphia. They were in an 18-hole playoff after shooting 8 over for 72 holes. Talk about your old-school USGA! Betsy King was the low amateur with 303.

The Carner group started just after High Noon, in the heat. She looked spiffy, in her colorful shirt and clamdigger pants, but the game was not there from the get-go—double, bogey, bogey, double on the first four holes—and she signed for a Friday 83 when she did, in fact, need another 79, to make the 158, 12-over cut. She missed by four.

“I’m very tired,” she said at the end of the long day. “I never really got the rhythm of the swing today. I drove it not well today, and I’ve been driving it good. So you’re starting on the wrong foot.”

Anyway, in May the second U.S. Women’s Senior Open will be played, at Pine Needles. Big Mama will be newly 80 and, she said on Friday, “I’ll be ready.” Jug McSpaden is the oldest player ever to play in a men’s U.S. Senior Open in 1990, at age 81. Carner already has that honor on the women’s side.

Asked what brought her back to play, Carner said, “It’s always the fun, of meeting everybody again. But the competition. You only get bad from lack of work. I mean, we’re not playing long, so you don’t need to hit it nine miles, but you just need to hit it. And as long as I don’t have the yips, why not—you know?”

The competition. Exactly. You can see that in Tiger Woods’s play this year. After basically not playing for the better part of four years, it is so obvious that Woods is thrilled just to be playing competitive golf at a high level again, even if it is not remotely at the level he once knew.

The inaugural event has been a hit. The USGA was privately predicting that maybe 1,500 fans would show up, but attendance on Friday was closer to 3,000, with most spectators paying $30 for admission, parking at a school down the road and being shuttled to the course by bus. Only the tees and the greens are roped off so the fans can really roam the property and get to know the course. The competitors are using the men’s locker room in the club’s historic clubhouse (no air conditioning), so they are getting the full CGC treatment. The course the women are playing dates to 1894 and the club was founded by Charles Blair Macdonald. It was one of the five founding members of the USGA.

Soon after Fox and the USGA announced their mega ($1.1 billion) TV deal in 2013, David Fay, then a newly retired USGA executive director, started drawing up a dream list of things the USGA could do with its new-found wealth. One thing he said was that the USGA should create a U.S. Senior Women’s Open. Another thing the organization should do, he said, was go to Chicago Golf, build a bunch of new back tees and bring the U.S. Open back to the course. The club last held an Open in … 1911. David Fay always had a knack for thinking both within the box—a necessary thing in golf administration—and way outside it.

Based on the quality of the leaderboard, Chicago Golf Club is the kind of course that will identify the best players. Through 36 holes, Davies and her fellow Englishwoman, Trish Johnson, were leading at 4 under. Inkster, playing out of carry bag and wearing a country-club baseball cap, was in third place, three shots back.

Davies, winner of the 1987 U.S. Women’s Open, says that she hits the ball about the same distance now, at age 54, as she did 20 years ago, because of the technological improvements in club-making. Nobody would be surprised to see her win here—what a swing!—but even Davies found herself mesmerized by Carner, by her presence and what she was doing.

“Just to see her,” Davies said. “I watched her hit one shot. We were playing 17, she was playing 3, and she hit this lovely little shot. I don’t know if she birdied it, but it looked like she hit it pretty close. And the old swing looked just as good as it did years ago. Maybe not the power, but it looked like a very similar swing. She’s added so much to this. She’s made this tournament. She was there at the dinner, and just brought the house down. Just impromptu, got up, made a little speech. To be playing at 79 and next year at 80 is extraordinary. I’ll be trying to be there, at 80.”

Golf does that well, the handing down of the game, from one generation to the next. You can be sure that at the John Deere Classic (formerly known as Quad Cities) and at the LPGA stop this week in Sylvania, Ohio, there will be players and caddies and officials and reporters paying attention to what the women from yesteryear are doing now on the old links in Chicago. How cool is that?