US Open: What You Need to Know About Oakmont’s Church Pews Bunker 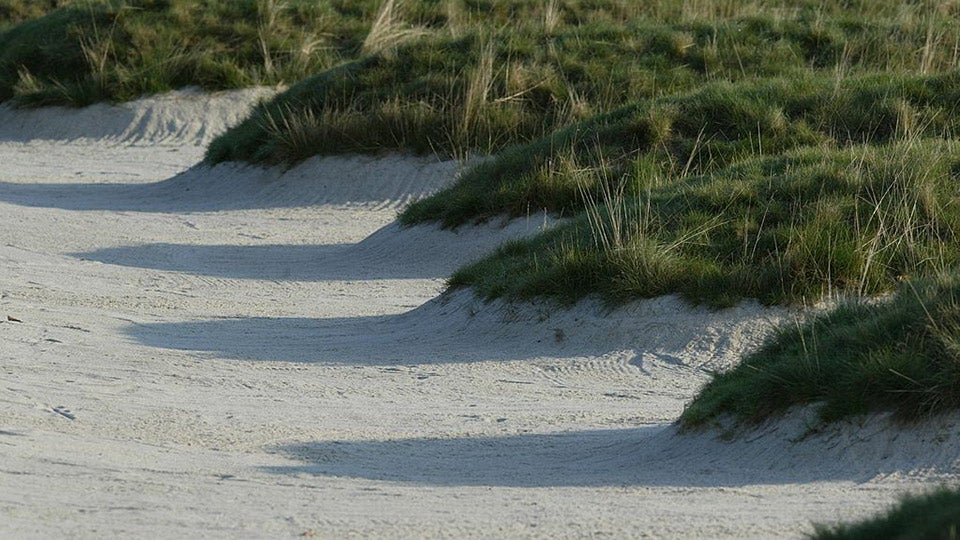 The Church Pews sits between the third and fourth fairways at Oakmont, awaiting hooked drives from either tee box.
2006 Getty Images

8 Number of bunkers the Church Pews originally were before club president W.C. Fownes Jr. and superintendent Emil “Dutch” Loeffler embarked on a bunker reduction program in the 1920s, in effect consolidating the eight bunkers into one.

209 Total number of bunkers at Oakmont, reduced from a peak of 350 in the club’s early days. None is more famous (or infamous) than the Church Pews, which sits between the third and fourth fairways, awaiting hooked drives from either tee box.

102 Length in yards of the Pews, following a 2005 expansion by architect Tom Fazio. The bunker is tapered, with the narrow side (18 yards wide) closest to the third green and the wider side (43 yards) closer to the third tee.

12 Number of turf islands in the Pews. Fazio added four new islands, two toward the third green and two toward the fourth. Looking at it top to bottom from the third tee, the first five islands at the top of the bunker are concave and the seven closest to the tee are convex.

3 Approximate height in feet of the turf islands. There are two to three yards of sand on either side of each island to the edge of the bunker and four to six yards of sand between each island.

0 Number of players who look forward to landing a ball in the Pews. Escapes have been rendered more difficult in recent years, as sandy slopes now bracket the islands that were once separated by flat sand. In addition, the club has allowed the grass that tops the islands to grow taller. Because the separation between ridges is so miniscule, and the elevations so abrupt, horribly awkward lies and stances are common. Merely slashing it out sideways can be a challenge.

15 Hole number of the 500-yard, par 4 that houses a lesser-known set of eight grassy pews. Fazio’s team turned what were peninsulas of turf into islands.

Read More: The History of the Stimpmeter Starts at Oakmont

Fact or fiction: Oakmont actually slows down its greens when the U.S. Open comes to town?

“There’s only one course in the country where you could step out right now—right now—and play the U.S. Open,” Lee Trevino said two decades ago. “And that’s Oakmont.” Then he revised his statement: “First, you’d have to slow down those greens.” Was Trevino right? Yes, says Banks Smith, past club president and chairman of the grounds committee for the 1994 U.S. Open. “There isn’t any question,” he says. The ’94 Open had the greens running around 12 on the Stimpmeter, while during the regular season, they run between 13 and 13.5. “[The members] love it,” Smith says. “They’re masochists.”

This story originally appeared in the June 2007 issue of GOLF Magazine.