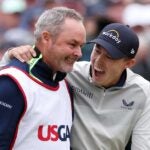 Matthew Fitzpatrick won the U.S. Open at The Country Club with caddie Billy Foster at his side.

BROOKLINE, Mass. — As the U.S. Open celebration erupted behind him, Billy Foster wept. The 59-year-old Brit has been a professional caddie for the better part of four decades. He has caddied for top pros and legends of the game, including Seve Ballesteros, Darren Clarke and Lee Westwood. But he’d never been on the bag for a major championship. Until now.

Foster separated himself from the celebration. He walked toward the hole and grasped the red “USGA” flag with his right hand. He planted a firm kiss on the corner.

“Billy had been saying for a while, the time will come,” his boss, newly minted U.S. Open champion Matthew Fitzpatrick, said in his winner’s press conference. “You’re playing so well. Just keep doing what you’re doing. It will come. It will happen. It will happen.”

Foster must have been telling himself, too. It will happen.

The week began as a nightmare for the U.S. Open. The Saudi-backed breakaway LIV tour dominated the lead-up to America’s national championship. PGA Tour defector Phil Mickelson kicked off the week with a strange, morose press conference, and that gloom spread over his fellow competitors. Gossip swirled throughout practice rounds. Brooks Koepka called the distractions “a black cloud.” Collin Morikawa decried the rumor mill. But there was no stopping it.

Men’s professional golf felt like it was tearing apart at the seams, with the very foundations of the professional game — 72-hole tournament stroke play — suddenly under fire. The question of “what really matters” suddenly felt very fungible. Playing a simple tournament, even one with the gravitas of the U.S. Open, felt frivolous given the circumstances. Were the players fiddling while Rome burned? But they played on nonetheless. Damn good thing, too. Because on Sunday afternoon, we were reminded why they do this, and why we watch, to begin with.

Seventy-two holes is the perfect number for a golf tournament. There are two rounds to thin the herd and separate the competitors. There’s one day for moving, for jostling, for jockeying for position. And there’s a final day to put everyone in a giant pressure cooker and see how they react. Three rounds is undoubtedly too few. Five rounds would clearly be too many. Four rounds? To borrow from my former colleague, the legendary Michael Bamberger: That’s just right.

Scenes from Sunday’s final round underscored just how much this championship meant to the key characters of its conclusion.

There was Keegan Bradley on the 18th green, soaking up the adoration of his beloved New England crowd. He began Sunday’s final round just two shots back but bogeyed his first three holes and soon fell seven shots off the pace. He rallied with birdies at 7, 8 and 11 to give himself a fighting chance and tried his best to soak up the moment.

“I told my caddie on I think it was the 12th hole that I’ve got to really try to enjoy this coming in,” he said post-round. “Something I never really take a second to do, because I may never really get this opportunity again, and I did that.”

Bradley finished T7. Given the KEE-GAN chants that rained down on the 18th green, there was no question he was leaving a winner.

“Man, I’ll remember that the rest of my life,” he said. “It was really special.”

There was Rory McIlroy, left ruing another missed opportunity. The four-time major champion spent the first few years of his professional career building a towering major championship resume. He’s spent the years since his last major in that massive shadow, chasing the accomplishments of his own accomplished past.

“It’s been eight years since I won a major, and I just want to get my hands on one again,” McIlroy said after Thursday’s opening round. His brilliant, maddening, uneven final-round 69 left him T5, just close enough for it to hurt a little extra.

Joel Dahmen, who once said he could never win a major championship, led the tournament at its halfway point. He hung on over the weekend and came home with a respectable Sunday 71 for a share of 10th place, guaranteeing himself a spot in next year’s U.S. Open. He’s thrilled to have it, if disappointed not to come a little closer.

“I’m very proud of myself for the way I handled myself on the weekend,” he said. “I showed myself and a lot of other people that I’m pretty good at golf.”

Dahmen’s week was a cocktail of pride and doubt and pressure and frustration. When you care, it all gets complicated.

There was Will Zalatoris, chasing his first major championship, in it until his birdie putt just skated past the edge on the 18th green. He finished second at last year’s Masters. He lost in a playoff at this year’s PGA Championship. And on Sunday he finished a whisker shy of another playoff, settling instead for a hugely impressive, hugely frustrating share of second place.

“This one hurts in particular pretty hard, but it’s motivating,” he said, processing his own pride and pain in real time. “I’ve got to keep doing what I’m doing. I know I’m going to get one sooner or later.”

There was Scottie Scheffler, chasing the sequel to his win at Augusta this spring. He built a two-shot lead with four birdies in the first six holes, lost it with two bogeys in a row and nearly got it back with a birdie at 16 and a near-miss at 18.

“It’s just really special to kind of have the crowd behind you and to make big putts and to hit important shots,” he said. “I enjoyed today a lot. Unfortunately, just was one shot short, but it was really special being able to compete.”

With the T2, Scheffler reached $12.9 million in yearly earnings, setting an all-time record for a single PGA Tour season. There’s a whole bunch that money can buy. Not quite everything, though.

Fitzpatrick earned $3.1 million with his win. After the round he broke down the biomechanical transformation he’s undergone to get from an undersized-but-overperforming Tour pro to someone who could contend with the game’s biggest bashers at a brawny U.S. Open.

Since he was 15, Fitzpatrick has charted every single shot he has hit in a round. Line, distance, proximity to target. He has an enormous database of his entire game. Two years ago he set his mind to gaining distance, so he and coach Mike Walker began working with biomechanist Sasho Mackenzie. Week-in, week-out, Fitzpatrick swung his Stack speed stick.

“I’ve been doing that religiously,” he said. “It’s like a training program. I’ll be honest, it’s worked wonders.”

In golf, progress is rarely so linear. But there’s a straight line to be drawn from Fitzpatrick’s ridiculous discipline and relentless hard work to his Sunday victory. This was a win for the little things. It was a rejection of shortcuts. It was affirmation that golfers aren’t born, they’re built. It was even a nod to history; Fitzpatrick’s 2013 U.S. Amateur win came at Brookline, too.

Given the context of this week, it was impossible not to contrast the tournament’s conclusion with last week’s LIV debut. Fitzpatrick’s first-prize payout couldn’t match that of Charl Schwartzel’s $4.75 million win at Centurion. By any other measure, the U.S. Open — its contestants, its venue, its drama, its excitement and its meaning — blew away the competition. It sounds stodgy and trite to tout values like “legacy” and “history” as what makes professional golf tournaments matter. But context does matter. This year’s U.S. Open matters because last year’s did, and the year before that, and the decades of championships before that, too.

Time will tell if this is another chapter in golf’s major championships or the end of one chapter and the beginning of something much, much different. Even at Sunday’s glorious finish granted us relief from LIV’s endless news cycle, the specter of the breakaway league hung in the air.

Bryson DeChambeau finished Sunday’s round and headed straight for the range, beginning preparations for Pumpkin Ridge in two weeks’ time. LIV headliner Dustin Johnson finished his round, slipped past media and was in his courtesy car alongside Paulina Gretzky, the newlyweds rolling off property just minutes after signing his card. As the leaders finished their front nine, a Mexico TV station confirmed the departure of Abraham Ancer to the LIV tour.

In other words, even if this week was a small battle won by golf’s status quo, it didn’t mean much in the war for golf’s future. This is just the beginning. PGA Tour play begins again at the Travelers Championship in a few days’ time. There’s a 7:30 a.m. player meeting on Tuesday at which Jay Monahan will provide members with “several important updates” and answer questions. More top pros will announce their departures. Eye-popping dollar values will catch our attention.

What actually matters will suddenly seem murkier again. We’ll have the memories of Zalatoris agonizing over that last missed putt, and Bradley soaking up that final ovation and McIlroy exhaling on his way off the 18th green, knowing what could have been — but those will fade, too.

Golf’s majors will endure. Regardless of the fight for LIV’s future, the game’s biggest stars will show up at the Open Championship in one month’s time. Many of the faces we saw in contention on Sunday will show up on St. Andrews’ yellow leaderboards. Some golfers are built for this sort of thing, after all. Matthew Fitzpatrick has built himself to be one of them.

It will happen. That was Foster’s message for Fitzpatrick. Now it has. We saw and felt just how much it meant.

We just don’t know what will happen next.