After Thursday’s first round at the 2019 U.S. Open at Pebble Beach, one man sits atop the leaderboard: Justin Rose.

The 2013 U.S. Open champion took the lead after 18 holes by tying the record for the lowest U.S. Open round at Pebble Beach, as Rose shot a six-under 65 to equal Tiger Woods’ performance in the first round of the 2000 U.S. Open.

After shooting even-par over the first three holes, Rose got into red figures with a birdie at the par-4 fourth hole. He then eagled the par-5 sixth and birdied the par-3 seventh to move to four-under. After a bogey on the par-4 eighth hole, Rose made the turn at three-under.

Rose began his back-nine with six straight pars. But the No. 4 player in the world closed strongly with three straight birdies on the final three holes to surge into the lead at the third major of the golf season.

Justin Rose sinks a long putt on 17 to pull into a five-way tie for the lead! #USOpen pic.twitter.com/3HWn3rs3ZL

Justin Rose finishes with 65, tying the lowest #USOpen round at Pebble Beach. pic.twitter.com/FjOHUHqLq1 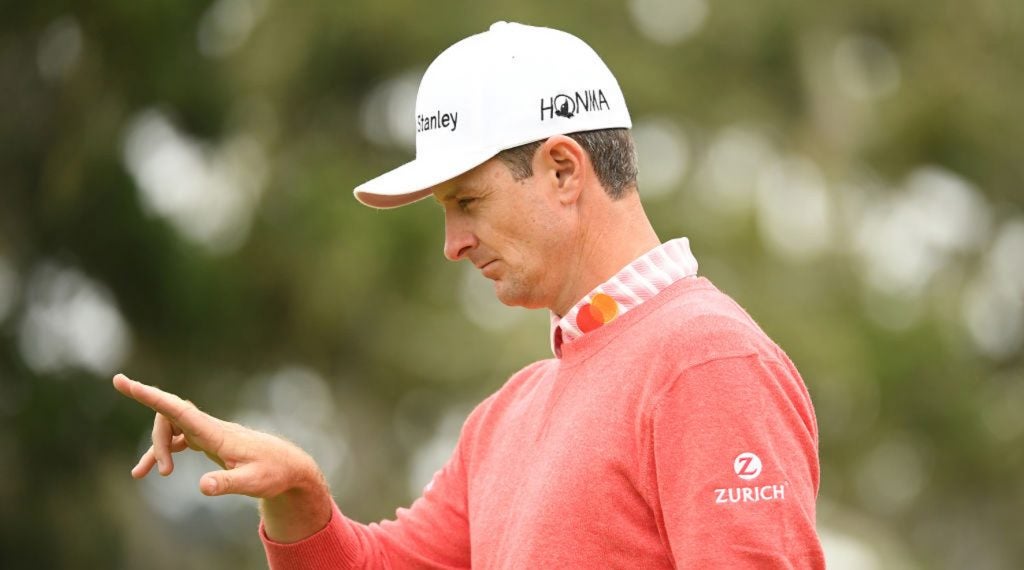 Rose’s prowess on and around the green shined on Thursday at Pebble Beach. Rose led the field in both Strokes Gained Short Game (+3.13 strokes) and Strokes Gained Putting (+5.51 strokes). He also had a total of only 22 putts over 18 holes, including 1-putts on 14 greens.

With a chance to win his second U.S. Open title and first major championship since his triumph at Merion in 2013, Rose was happy about his first round.

“Obviously a fun day of golf,” Rose said afterwards. “I guess the round was going nicely. I was 3-under par, had a rough patch, had to scramble, work hard, keep my round together. Even when I made a mistake, I was willing to accept. I was kind of playing, okay, if you can go back to 2-under — I was trying to stay patient with myself mentally, but kept up-and-downing the ball, kept the momentum up. And then got rewarded with a hot finish, birdieing the last three, took a good round to a great round.”

When Tiger set the record for the lowest U.S. Open round at Pebble Beach in 2000, he went on to win his first U.S. Open title and third major championship by a record 15 strokes. Now, Rose will be looking to do the same. He tees off alongside the Big Cat on Friday morning at 11:24 a.m. ET (8:24 a.m. local).