The story behind the incredibly awkward ending to the U.S. Mid-Am 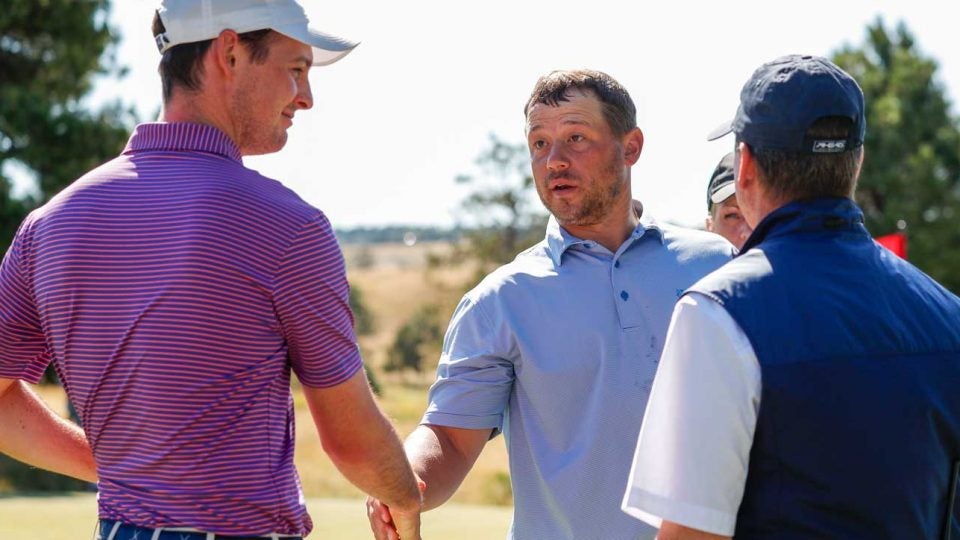 Lukas Michel won the U.S. Mid-Am on the 35th hole on Thursday.
USGA

On Thursday, Australian Lukas Michel closed out a 2&1 victory in the finals of the U.S. Mid-Am at Colorado Golf Club. It was a momentous victory; Michel earned exemptions into the next two U.S. Amateurs, the 2020 U.S. Open at Winged Foot and a likely invitation to the 2020 Masters. But Michel admitted that he was almost waylaid on the final green of the match.

Despite a series of 3-down deficits throughout the course of the 36-hole final, Michel made a stout comeback with a string of birdies on 12, 14, 15 and 16 coming home. Standing on the 17th green, Michel held a 2-up lead over opponent Joseph Deraney. Deraney had 10 feet for birdie which would send the match to the 36th hole, but his putt broke across the hole.

That’s when things got awkward. Deraney removed his hat and began walking towards Michel, leading to applause from the crowd. But Michel still had three feet left for his par to tie the hole and end the match.

“With the length of it, I was really confused,” Michel said. “That putt is not a conceded putt.”

Deraney got as far as shaking Michel’s hand before realizing his oversight.

“I think he said, like, ‘Sorry, that’s not good, I thought it was shorter,’ or something like that.”

“I was like, okay. Well, you know, reset here. Like, not sure what was going on with that,” he said.

One can only imagine the fallout if he’d missed and gone on to lose the match. Short putt concession controversies tend to send shockwaves across the golf world — think Sergio-Kuchar at this year’s WGC-Match Play, or Suzann Pettersen at the 2015 Solheim Cup, or the strange U.S. Girls Junior finish in 2017. Michel knew that it was a genuine misunderstanding, of course. But he still had to make the putt.

“I had to hole my three-footer to win, which was probably the most nerve-wracking putt of my life. Because three-footers for the win with all that on the line, as much as I try and not think about it, it’s pretty hard not to.”

Michel stepped up to the putt and gave it just enough to sneak inside the right lip.

Lukas Michel has done it!

“It hit the right edge,” Michel said. “It was like — it was nerve-wracking, obviously. But I holed it.”

From there, all that was left was the celebration — and dreams of big events to come. “I wore a Winged Foot sweater for the first nine holes today,” Michel said, referring to the 2020 U.S. Open host site.

“I mean, many, many golfers, the best in the world, don’t get the opportunity to play a major, let alone the U.S. Open. So yeah, I can’t wait.”