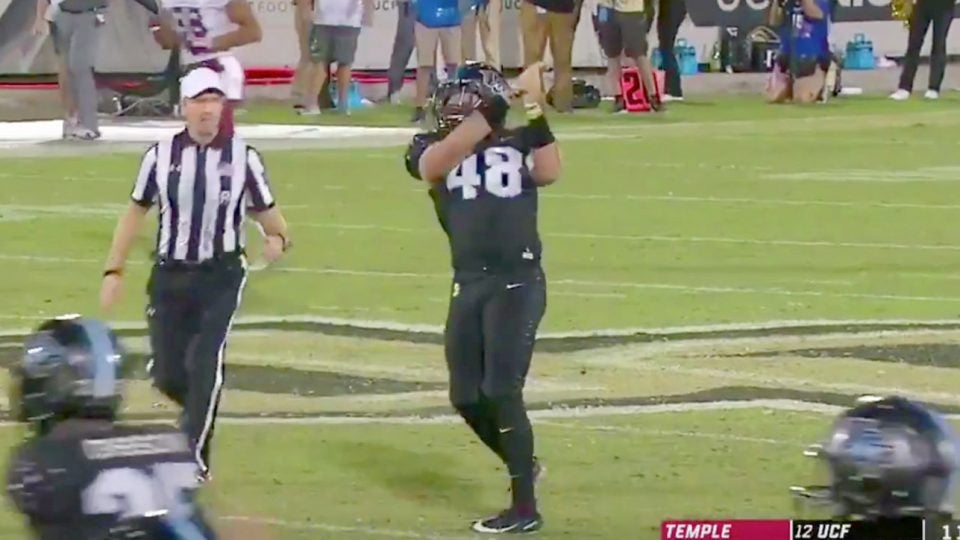 UCF punter Mac Loudermilk after making a punt during a recent game against Temple.
@barstooltweetss

Special teams players always get overlooked and forgotten about when watching a football game. It’s always the offensive and defensive players who get all the love and attention. But punters just want to have fun too.

Enter UCF punter Mac Loudermilk, who has one of the best names in both college football and in all of sports. During UCF’s 50-40 win over Temple on Thursday night, which improved their record to 8-0 on the season, Loudermilk decided to have some fun after a punt early in the third quarter.

With No. 12 UCF leading the Owls 35-34, the Knights were set to punt. Here’s when Loudermilk’s moment to shine came. After bombing the football and pinning Temple on their own three-yard line, Loudermilk decided to celebrate the punt by breaking out a golf swing.

After the mimicked swing, Loudermilk topped it off with a twirl of the imaginary club. Check it out here:

UCF’s punter is a LEGEND pic.twitter.com/BIYhesLbeS

Of course, we can’t overlook his Conor McGregor-esque strut off the field after the punt.

While it might have just been a mimicked tee shot, Loudermilk looks like a natural golfer. His posture, footwork, follow through, and swing are all on point. It looks as if Loudermilk has gotten out to the links to play a bit when not punting footballs down in Florida. With the amount of great courses available to Loudermilk to play in the Sunshine State, the senior is sure to get better.

And if his punting duties at UCF don’t take him to the NFL, the golf game could be a good fallback for him. Maybe he can bring his post-swing celebrations to the golf course.