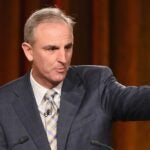 In life beyond ESPN, Trey Wingo is finding a home in golf.

When Trey Wingo talks about golf — something the veteran announcer recently returned to doing as part of the PGA Tour Live team — it’s easy to forget you don’t actually know Trey Wingo.

And bam! There he goes. Launching into a story about a sports television job in Allentown, Pa., in the early-90s. How his wife’s retail gig pried open his weekend afternoons for long enough to spawn his interest in the game. How he’s been obsessed ever since.

It’s almost startling how quickly Wingo draws you in. His accessibility is so refreshing, his jocularity so genuine. You’re on the inside of his stories and jokes, and he’s right there with you delivering the details and punchlines.

He’s at it again.

“I was like, ‘Holy hell, this is golf?’ That was the beginning of a really bitter battle every two years between the U.S. and the European team.”

Of course, no story — particularly no Ryder Cup story — is complete without a dash of Wingoian wit.

“Hale Irwin had one of the greatest quotes in the history of sports media,” he says, his voice rising to recall the nerve-shredding six-footer Bernhard Langer faced (and missed) in his pivotal singles match against Irwin.

“Hale told Sports Illustrated, which was one of the greatest quotes of all-time, he said, ‘the sphincter factor was high out there.’”

This is how Trey Wingo talks to a stranger. It’s how he’s spoken to millions of perfect strangers for the better part of three decades in sports media. It’s his secret sauce.

Wingo is skilled in the art of the everyman. His gift is a knack for communicating — in conversation, over the phone, or on television, where he has made his home for the last three decades — in a way that makes the listener feel comfortable.

In the late-90s, Wingo’s talents brought him to ESPN, where he hosted NFL Live, starred on the syndicated radio show Golic and Wingo and anchored the network’s coverage of the Open Championship and U.S. Open, among dozens of other events.

Last September, Wingo and ESPN parted ways after 23 years. While the split was not mutual, it was amicable. The 57-year-old broadcaster had longed to turn his focus toward live programming, and his newfound free agent status granted him the freedom to pursue his interests.

After a short break, he created Half Forgotten History, an interview-driven podcast featuring many of the sports and entertainment world’s biggest names. But Wingo still itched to get back into live sports, particularly golf.

“There’s nothing better than being there,” he says. “It’s just fun to call live action, more than anything else.”

In January, he received a phone call from an old friend: PGA Tour director of broadcasting Bruce Kaufman. The Tour was looking for an established talent to anchor PGA Tour Live featured group coverage at the Farmers Insurance Open. Was Wingo interested?

“You work in this business long enough, you know someone who knows someone anywhere,” he said. “Basically, they called me out of the blue, and that’s how it got started. I just said, ‘Sure, absolutely.’”

Wingo was back in his element at the Farmers, steering digital coverage of the tournament for four days to positive reviews from viewers.

“It was just nice to be back in the saddle,” he said. “When I was doing it before, I’d do featured groups and feature holes for the U.S. Open and the Open. The venue was great, the tournament was spectacular.”

Evidently, the powers that be in professional golf agree. Wingo said he will continue to appear on PGA Tour Digital coverage in the future, though he and the Tour declined to offer specifics.

Still, the week at Torrey put Wingo at ease — an ironic twist for someone who’s built his career around providing that very service.

“I guess [there was a moment where it hit me],” he said. “It’s kind of like that situation where you haven’t seen one of your old college buddies for a while, and then you see them somewhere, and you’re talking, and it’s like time has not passed at all. It’s like, ‘Oh yeah, I know you. This is exactly how it’s supposed to be.’ The old bike thing. Just keep pedaling.”

Now, Wingo is rolling with another story. This time it’s about himself.

It sounds familiar, but you want to hear the ending just to be sure.

“To me, that’s the appeal of the game,” he says. “If everyone could do it right all the time, I don’t think the game would be nearly as interesting.”

“That’s sort of the eternal challenge of it. You can sit there and four or five holes be as good as anyone in the world, and then one little thing, one minor mistake in that beautiful, maddening motion that is the golf swing, and suddenly it’s like I’m playing with a scythe instead of a 7-iron.”

You don’t know Wingo. But his passion for the game couldn’t be more relatable.

“I love golf,” he said. “I enjoy watching people do things I can’t fathom. I very much am looking forward to continuing the foray into golf.”

How Charles Barkley rebuilt his golf swing, according to the instructor who led the charge