You probably didn’t think Sergio could win the Masters, but Sergio did

AUGUSTA, Ga. – Sergio Garcia had played 73 previous majors and seven-eighths of this one, and people were laughing at him. This was on the 11th hole at Augusta National Sunday. Garcia was unraveling. He had bogeyed the 10th to fall out of the lead. He pulled his drive on 11 into the pine straw. He addressed his ball, walked into the fairway to get another look at the green, then walked back and addressed the ball again… and then stepped back again. The laughter at Amen Corner was immediate and cutting: There goes Sergio again. Scared. Can’t handle the pressure. He might as well just throw the ball in Rae’s Creek.

Garcia hit a nice recovery, bringing a roar that accompanies shockingly good news. School was canceled. Everybody was getting a tax refund. She said yes. See, the fans here wanted Garcia to win. They just didn’t trust him to actually do it, and as he bogeyed the 11th, survived the 12th, and hit his drive on 13 into a bush, you could understand why.

Justin Rose, perhaps the steadiest golfer in the world, was standing in the fairway with a two-stroke lead. Garcia had to take a drop in the pine straw. Fans seemed to expect Garcia to evaporate completely, and the rules official would just see a blue shirt and white pants over there in the woods.

Well, what did fans know? They hadn’t seen Garcia at peace lately, thanks to his engagement to Angela Akins, or the notes of encouragement that Akins asked their friends and family to send him. They hadn’t seen the Post-Its on the bathroom mirror in the house they rented in Augusta this week, with inspirational quotes from Buddha and Audrey Hepburn and one that read: Don’t forget to be amazing.

They hadn’t seen Garcia play so well in his practice round Tuesday with his Spanish pal, Rafael Cabrera-Bello, or how soundly he slept Saturday night, or how calm he felt on the drive to the course Sunday morning. They hadn’t been at his house Wednesday night, when he went over to Akins and said:

“I just got this text from Jose.”

Jose, of course, was Jose Maria Olazabal, the two-time Masters champion and one of Garcia’s heroes. Olazabal told Garcia he wanted to share his locker in the Champions Locker Room with him. Olazabal knew, perhaps better than any golfer in history, what that note might mean. On Masters Sunday in 1994, Olazabal had found a note in his locker from his hero, Seve Ballesteros, and Olazabal went on to win his first Masters.

Sergio Garcia stood in the pine straw and proceeded to do the four things he absolutely had to do: lay up, pitch to the green, make the par putt, and believe. How much should a successful man change? The 37-year-old Garcia has been one of the best players of his generation and a Ryder Cup star. He loves his life. He plays tennis. He travels the world. He makes goofy jokes. But he had not done what he knew he could do. He had not won major championships like the great Spanish golfers Ballesteros and Olazabal had, and of course that bothered him. But he was – what, 98 percent of the way to his dream life? Why would you mess with that? How would you mess with that?

For Garcia, the answer was in the pine straw. There was a time – OK, a decade or two – when doubt would have beaten him straight-up. But this is a different time. He felt it all week. Augusta National does not set up that well for Garcia’s game – he prefers a fade, and the course calls for hitting a lot of draws, which is why he ended up in the pine straw in the first place. But Augusta is ideal for Garcia’s new mental approach. Garcia now understands that bad breaks happen. What matters is what you do next. That kind of thinking is what wins the Masters.

So he was not thinking about whether his two-stroke deficit would balloon to four. He knew that on the back nine here, there were birdies to be had. He said he figured, “unless Justin started making birdies left and right, I would probably have my chances.”

He made his par. Shockingly, so did Rose. On the next hole, No. 14, Garcia hit his approach to six feet. The whole Masters had come down to this twosome – Rickie Fowler had faded and Jordan Spieth had fallen off the leaderboard entirely, and the everybody on the grounds seemed to be following Garcia and Rose. But when Garcia looked over at the sea of faces, his eyes locked on his fiancée. Akins pumped her fist. He nodded, then sank his birdie putt.

He was one shot behind, and he was back – back to playing the kind of golf he played at the start of the round, when he confidently powered his drives well past Rose. He walked to 15, where Olazabal once sank a long eagle putt to help seal his first Masters. The connection from Ballesteros to Olazabal to Garcia is one of the strongest in the sport. There is really nothing like it in American golf. There have been so many great American golfers that nobody really has to carry the flag alone; even when Tiger Woods was at his peak, he had David Duval and then Phil Mickelson right behind him. Ballesteros was a feisty proponent of Spanish golf – he lobbied hard to bring the Ryder Cup to Spain, then captained a win there. Olazabal and Garcia have always played for their country as well as themselves.

Garcia made an eagle of his own and pumped his fist as fans screamed. Rose birdied. The men were tied. Rose moved ahead with a birdie on 16, but Garcia stayed steady; Rose bogeyed 17 and they were tied again as they headed to 18.

On the 72nd hole of his 74th major, Garcia had a five-foot putt to win the Masters. He missed.

But what matters is what you do next. Garcia was headed to a playoff, and … well, this will surprise the people who have seen him lose so many majors and waggle his club over the ball a dozen times before hitting and publicly say that maybe he wasn’t cut out to win majors, but Garcia likes playoffs. It means he has had a good week, and “I can go out there and kind of freewheel it.”

Families and agents of both golfers huddled near each other behind the 18th green and watched Garcia’s drive land in the fairway. Rose, usually the model of poise, found the trees. A few minutes later, Garcia sank a 12-foot birdie putt to earn his spot in the Champions Locker Room. 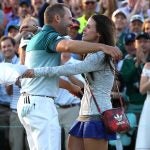 You may also like A long time coming: Emotions overcome Garcia family after Sergio’s Masters win

If Garcia had checked the betting odds at Bovada before the final round, he would have seen himself as the fourth choice, behind Rose, Jordan Spieth and Rickie Fowler, even though he led Fowler by a stroke and Spieth by two. He would not have had to ask why. He was Sergio Garcia. That’s why.

He is Masters champion Sergio Garcia now. He said afterward, “I’m very happy but I don’t feel any different.” And he said he tried to see his old, unofficial title, Best Player Never to Win A Major, as a compliment: “at least ‘best player,’ there’s a good thing there,” he said with a laugh. Garcia finally won a major because he saw his title like he saw that pine straw: He could look at it and give up, or he could stay calm and get out of it.

He said the victory means more because of how long he waited – he first contended in a major at the 1999 PGA, at age 19. He has learned how hard this is, but also how much it should be enjoyed. During his 18-year wait, Garcia saw the great Ballesteros die at age 54 of brain cancer; Sunday would have been Ballesteros’s 60th birthday. Garcia has also seen arthritis hit Olazabal so hard in his late 40s that for a time, he could not even walk.

“To be able to join him and Seve as Masters champions from Spain,” Garcia said, “it’s unbelievable.”

The memories of this will stay with Garcia long after he leaves. He will remember giving a funny speech on the practice green, under a full moon. He will remember walking through the clubhouse a few minutes later and seeing Rose.

“Look at this man!” Rose said, and the old friends hugged, and Rose told Garcia how much he deserved it.

But a golf tournament happens all over the course at once. Nobody can see it all, and there were so many moments Garcia missed. One comes to mind now. It happened Saturday at the par-3 12th. Twenty-two-year-old Jon Rahm, Spain’s next great golfer, hit his tee shot and felt great about it until Augusta happened. The wind kicked up. The ball fell into Rae’s Creek. Rahm, who was in contention at the time, could not believe his misfortune. He took a drop, but his pitch bounced over the green. That’s when Rahm threw his club.

The crowd was stunned: You see a lot at Augusta National, but not that. Jon Rahm shot 73-75 on the weekend and finished a frustrating 27th. Don’t be surprised if he shows up here one day and gets a note from Sergio Garcia.