Winner, winner: What it’s like playing Augusta National on Monday after the Masters 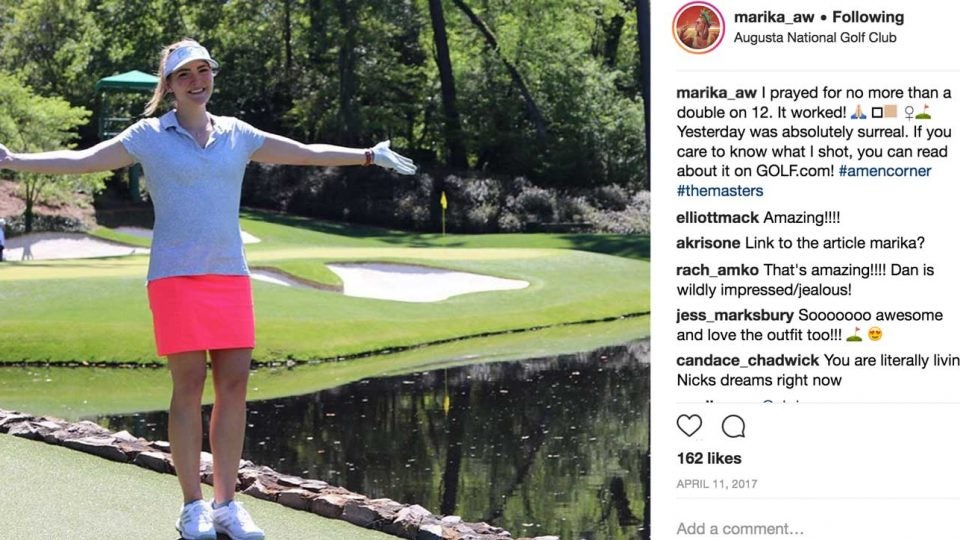 It’s just a little blue ticket stub, maybe an inch square, emblazoned with a number in a simple black font. But all week long at every Masters, reporters carry this talisman around as if it were one of Willy Wonka’s golden tickets. This stub represents an entry into the golf world’s most freighted lottery: the media outing the day after the tournament ends, when 28 lucky bastards are selected to play Augusta National, with the pins still in their traditional spots from Masters Sunday and the pines practically echoing with the roars from the day before. The interlopers are treated like members for the day, allowed to drive down Magnolia Lane and change shoes in the Champions Locker Room. The club even provides a caddie, gratis.

“It has to be the greatest perk in the entire sportswriting racket,” says longtime Sports Illustrated contributor John Garrity, who played in 2010 and can still wax poetic about his majestic second shot on the par-5 15th hole, which landed three feet from the hole. It’s so nice that you might fly to Augusta twice. In 2013, Sports Illustrated head of video Ian Orefice wrapped up his Masters workweek on Friday and winged home to New York City. On that Sunday at high noon the lottery winners were posted, and Orefice’s cell phone immediately began to melt. Did he ever consider not flying back to Augusta to play?

“Are you f—ing crazy, man?” he asks. “As soon as I got the call, I started bugging out, frantically calling a travel agent and throwing clothes in a bag. My wife thought someone had died.”

Orefice has played a little mini-tour golf, and from the 6,365-yard members tees — the Masters tips are off-limits — he shot a smooth 76. His caddie snapped a photo of a birdie putt tumbling into the hole on No. 14 and Orefice had the image turned into a painting that now hangs in the entryway of his home, much to his wife’s chagrin. (This is not even the most unusual memento from media Monday: Toronto Star columnist Dave Perkins brought home his divot from the 10th fairway and planted it in his backyard.)

Ah, but be careful what you wish for. Frazzled from the long workweek that precedes the round and overwhelmed by the enormity of the moment, plenty of reporters have found the Cathedral in the Pines to be a house of horrors. Mark Cannizzaro of the New York Post and Scott Michaux of the Augusta Chronicle both came down with a case of the shanks during their spin around the course. On the tee shot at the iconic 12th hole, Cannizzaro’s 6-iron produced a hosel rocket that wound up in the 13th fairway. “I wanted to slink into the woods and disappear,” he says. “I’d been holding it together with duct tape and Band-Aids, but now the dam had cracked. I somehow got a pitching wedge shot into the back bunker. I took one step to the left and the caddie says, “No, we’ve got to go this way,” and wheels me to the right. Every golfer wants to walk over the Hogan Bridge. I hit it so far right, I had to walk over the Byron Nelson Bridge to get to the green. I never set foot on the Hogan Bridge.”

Tim Peeler, then of the Durham Herald, found his own Waterloo on the 15th hole. After a career drive, he had only 180 yards left to the green. His caddie handed him a 5-iron and offered a minimalist pep talk: “Nice, easy swing.” With a violent rip, Peeler instead laid the sod over it, his ball squirting forward maybe 10 yards. His caddie handed him a 6-iron and tried to sound optimistic: “Nice, easy swing. We can still get there in regulation.” Again, Peeler made a mighty gouge in the pristine fairway, his ball expiring 10 paces closer to the green. His caddie gave him a 7-iron but could summon no words. Peeler skulled this shot into the pond and chili-dipped the next one into the water, too. All of this with clubs he bought the day before for the occasion. And yet, Peeler wrote in a blog post about the round, “I love my wife and kids to death, but I think even they will understand that when I go to the great clubhouse in the sky and St. Peter asks me to list the best days of my life, I will include April 11, 1994, along with our anniversary (June 12, maybe?) and the boys’ birthdays (sometime during basketball season).”

Peeler blames some of his problems on the pronounced downhill of the 15th fairway, which makes hitting it fat a distinct possibility. There are many other nuances that reveal themselves as you play the course that are hard to grasp even watching from the ropeline. When I won the lottery, in 1996, the greens were so crusty you could hear your footsteps. “The 13th fairway is so steep,” says Michaux. “You know the ball is going to be above your feet, but until you stand out there you can’t appreciate how much.” He also couldn’t believe some of the breaks on the greens, including on a bump-and-run on the second hole that, as the caddie predicted, made the ball take a 90- degree turn — and trickle into the cup for an eagle.

“The lies are so tight,” explains Garrity. “It adds an element of stress, especially with your wedge shots. For the first nine holes I was grinding my teeth and squeezing the grip really tight. I was trying to hit down on the ball so hard, trying to really pinch it. It wasn’t until I finally relaxed that I was able to hit some good shots.”

Former GOLF staffer Marika Washchyshyn knew the greens would be fast, but described them later as “glass-surfaced”; she insisted on putting everything out and shot 134. Orefice was struck mostly by the silence. “It really hit me when we got to 12,” he says. “You’re in this place that is usually crowded with thousands of people, and the roars are echoing through the trees, and now it’s dead silent and incredibly peaceful. It’s just amazing to experience that.”

Like everything attached to the Masters, media Monday has evolved through the years. Club officials cannot pinpoint exactly when the tradition began, but in the “70s and “80s it was first-come-first-served. Eventually so many scribes were lining up outside the club in the wee hours on Monday morning that the lottery was instituted.

Initially, you could play only once per lifetime. Reporters were only grudgingly accepted on club grounds: You had to enter through a parking lot, not down Magnolia Lane; the range was off-limits; and for reasons no one can explain, some rounds began on the 10th tee, robbing players of the build-up to Amen Corner. Sometime in the early “90s the rules changed, allowing lottery winners to reenter after seven years. (Thus Cannizzaro was granted a mulligan, and in 2014 he shot an 85 while, he says, “hitting the crap out of the ball.”) Later, under the direction of chairman Billy Payne, the club instituted the upgraded member-for-a-day experience. While every reporter loves to see Magnolia Lane and the Champions Locker Room, the pampering comes with some suspicion. 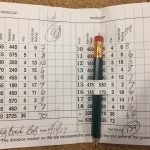 “It was just another slick p.r. move by Billy,” says one veteran reporter. “His thinking was, We will magnanimously give you this great experience, and we’ll build a palatial media center even though the old one was perfectly fine, all to soften the blow of restricting cell-phone usage and removing viewing towers where we could actually see the golf, and taking away access to players around the clubhouse. You know, the stuff that is really important to doing our job.”

There’s another dark undercurrent to media Monday: raging jealousy, because every year hundreds of reporters’ numbers aren’t called. In 2002, Shaun Powell of Newsday covered his first Masters, which was also his first-ever golf tournament. The following year he entered the lottery on a lark and it was big news in the press room when his number came up. That’s because Powell had never played a single round of golf in his life.

“Rick Reilly was so pissed off,” Powell said. “He compared me playing my first round of golf at Augusta to losing your virginity to Pamela Anderson. He tried to bribe me for my tee time.”

On Masters Sunday, after getting the news, Powell rushed out and bought a set of Big Berthas and proceeded to a local driving range to try to cobble together a swing. He never considered not playing. “I had already fallen in love with Augusta,” says Powell, now a commentator at NBA TV. “I wanted the experience, and I thought it might make a good column leading into the following year’s Masters.”

Come Monday, he apologized on the first tee to his playing partners and then toured the front nine in roughly 80 strokes, although it should be noted that pace-of-play is always quite leisurely on Mondays, as photographs and mulligans are plentiful. Still, Powell says, “I started feeling guilty, and my anxiety added to the struggle. I was hitting the ball here and there, hitting it fat, missing it entirely.” Amazingly, he had a chance to make his first-ever par on the 12th hole but he missed a six-foot putt. To this day, Powell doesn’t know his exact score, saying, “It was probably somewhere north of 150.”

And yet something beautiful happened that day: He fell in love with golf. Fifteen years later, Powell is a solid bogey-golfer, and he has pegged it at the Old Course, Pebble Beach, Shinnecock Hills and Bethpage Black, among other championship courses. And yet there is one track more than any other that he dreams about. “I miss a lot of things about covering golf,” Powell says, “and the Masters lottery is definitely one of them. I would kill to have another chance to play Augusta. There’s something kind of magical about that lottery. Just having the chance to play that course and walk in the footsteps of all those great players, you know? That’s all any of us want: a chance.”