I watched so much of the Hero World Challenge that at some point I had to search Google in an attempt to find out the name of the throaty metal band backing up the macho “We Ride!” 30-second bike spot that aired (it seemed) between each of the 280 shots Tiger Woods took in his own 18-man event. The leaders in the clubhouse, in this online name-that-band debate, were Nickelback, Disturbed and Seether.

The leaders in the Albany clubhouse, at various times, were Tommy Fleetwood, Charley Hoffman and, at the only time it really mattered, Rickie Fowler. Fowler has a swing so comically laid off at the top it would leave Sam Snead (who favored across the line) gasping for air. And yet the man in orange played 72 holes in 270 shots. Can you imagine that? A swing with serious imperfections, yet it was good enough to win by four? Well, yes. Now channeling images of Lee Trevino, Raymond Floyd, Hubert Green, Nancy Lopez and others who did not exactly cling to the textbook.

The point here is that as we (citizens of the global golf village) went into this Tiger Woods comeback, his first tournament in 10 months and his first following spinal fusion surgery, the chitchat was all about his swing. Well, after four competitive rounds you can say that his swing looked fine. His pitching game off tight lies looked unconfident. His putting was often excellent but sometimes lost. You can also say, and some will, that TV (Golf Channel, NBC) showed too much of Tiger. I’d say the broadcasters couldn’t show too much. He was the only reason I was watching, anyway. Woods showed over the course of four days that he can make the swings that successful Tour players make. Does he resemble, in any way, his 1995-2005 prime? No, of course not. Now he’s all muscles and surgical scar tissue. He’s not going back in time. But he can have good putting weeks and good chipping weeks and contend again. And if he can contend, he can win. Maybe not a U.S. Open, or not a traditional U.S. Open. (You know, tree-lined course, heavy rough, hard greens.) But at Augusta, maybe a British Open. Torrey Pines, Firestone. The looming question here is not his swing and the state of his game. It’s his mind. It’s his desire.

Part of that desire, he said in Albany, was for his kids to see him play world-class golf, and for the kids on Tour — Justin Thomas, Jordan Spieth, Danny Berger, Jon Rahm, et al. — to see the same. Not world domination. That ship has sailed. At nearly 42, with a reconstructed body, as a single father with a range of business interests (restaurant, course design), coupled with his legal and personal issues, it is unrealistic that he’s ever going to book the range time necessary to become the every-time-out presence he was. Going forward, it will be more now and again. Just like Phil Mickelson, Vijay Singh, Jack Nicklaus and others when they were in their early and mid-40s. 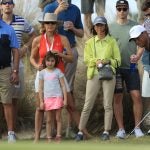 As a starting point, let’s say something you youngsters out there might not fully appreciate: Tiger Woods on a golf course is an exciting thing to see. We’re talking Willie Mays (or Mike Trout). Joe Montana (or Tom Brady). Pelé (or Messi). If you were there for Woods’s 15-shot win at Pebble Beach, you’ll carry that forever. At some of the Presidents Cup this year, at the Ryder Cup last year, it was exciting just to see the man in a golf cart. Why? Because he’s Tiger Woods. If you like golf, if you’re interested in what a person can do with a golf ball over the course of a 72-hole tournament on a challenging course, you could not not be interested in Tiger Woods.

The most exciting thing Woods did on the course last week was go out in 31 in the Friday round and get himself in a position where he could actually win this singularly unimportant golf event. But the most impressive thing he did was to play the final four holes in the third round in two under par, after going out in 40 (four over) and making a bogey on 10. Why? Because it would have been easy to pack it in. He’s the tournament host. He’s coming off surgery. His status in the pantheon is secure. The event is not meaningful. But he grinded out the finish. It could have been 80 but at day’s end the card read 75. At the peak of his powers, he’d look like he was shooting 73 and he’d sign for 69. He could grind it out like nobody’s business.

Woods looks huge through the chest and arms, like he could match Brooks Koepka lift for lift and pound for pound. If you hear about Tiger being out and about — in South Florida, in the Bahamas — he’s typically at a gym. Maybe he thinks that’s where his future as a golfer lies. Maybe he finds it more interesting. But he saw what we saw in Albany, what you see every time you watch the best players in the world play. The shots get more important and more demanding the closer you get to the hole. Fowler will tell you that. That’s the difference between his 270 and Tiger’s 280. Woods knows that. He’s smart. He’ll bridge the gap. Maybe not at Torrey Pines this year — that’s asking too much, too soon — but now and again between today and the 2028 Masters.