Does Rory McIlroy deserve to be Player of the Year? Here’s how our writers would have voted

In a special, emergency version of Tour Confidential we debate the recent Player of the Year news, in which Rory McIlroy was named the top player of the 2018-’19 season. In the NBA, MLB and NFL, the media determines the Most Valuable Player, so now we are giving you your chance to make a pick. Who would you have selected for PGA Tour Player of the Year? And why?

Sean Zak, senior editor (@sean_zak): Brooks Koepka, because for years (forever?) the majors have mattered more than anything else. And in the case of a tie, those events were always the tiebreaker. BK didn’t win a 30-person field at the end of a long season. He did win a WGC after digging Rors a Sunday grave in Memphis. This one felt obvious to me, but I’m not sponsored by FedEx.

Michael Bamberger, senior writer: If I were a player, and I could trade my season with only one other player, I’d choose Tiger. That’s one way to define the vote: who would you trade with? If I were Rory’s accountant, a PGA Tour employee, or an employee of FedEx, I’d vote for Rory. But Koepka should have received it, for his astounding performance in the four majors, plus two other wins that nobody will really remember.

Luke Kerr-Dineen, instruction editor (@LukeKerrDineen): Brooks was the best player throughout the four majors, undoubtedly. But that’s not the question. He simply wasn’t better than Rory when you look at the PGA Tour season as a whole. Brooks and Rory had had the same number of wins, but one of those wins included the Players Championship. McIlroy also won the FedEx Cup — Koepka, for his part, was only third-best in that contest. Rory also had more top 10s in fewer starts and had the best scoring average, which means he literally was the best player on Tour last season. All this ‘Brooks was robbed’ mania is much ado about nothing. 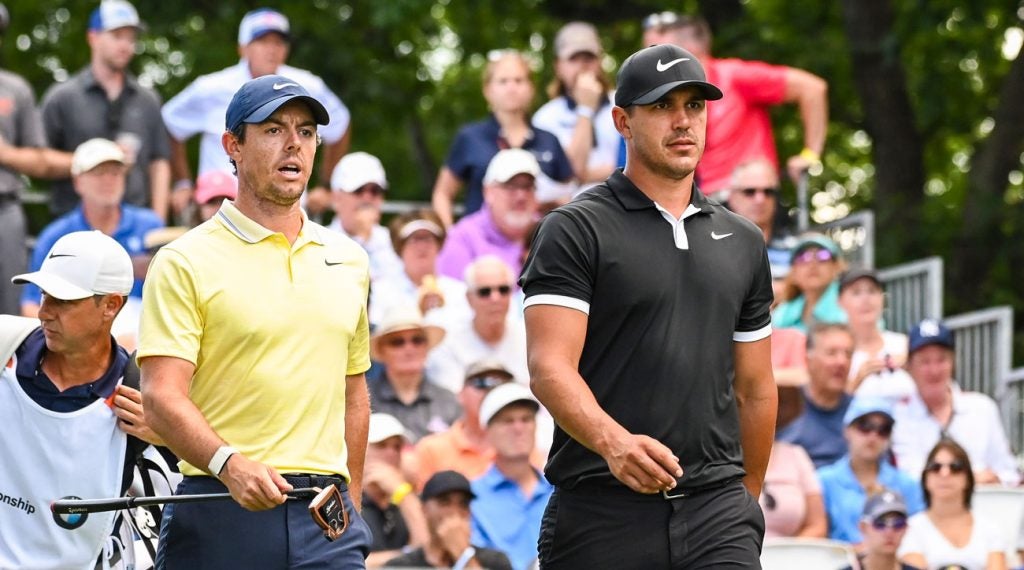 Rory McIlroy and Brooks Koepka each made their case for POY. Who should have won it, though?
Getty Images

Jonathan Wall, equipment editor (@jonathanrwall): I’m in complete agreement with Sean on this one. Rory’s POY award feels like someone trying to push an agenda. The majors have always been weighted more heavily, so you’re basically saying a FedEx Cup and the Players equal one major victory. Is that fair? Maybe. Then again, Brooks won a WGC and waxed Rory in the process. I’m pretty sure those events are somewhat important to the Tour. Say what you will about Rory’s impressive season — and he did have one of the best ever from a statistical standpoint — but I don’t think it’s all that close. It should’ve been Koepka the whole time. Now we get another season of BK playing with a massive chip on his shoulder. Should be fun.

Zak: Surely we can all understand that applying great significance to the FedEx Cup and NOT the Wyndham Rewards is incredibly silly.

Alan Bastable, executive editor (@alan_bastable): There’s a case to be made, as many have, that the Players is harder to win than the PGA. Parking historical significance aside, the field is just as strong at Sawgrass, and the stress the players feel on those diabolical closing three holes late on Sunday is surely in the same ballpark as major pressure. If we can agree on that, then we can agree that the quality of Rory and Brooks’ respective three wins was at least comparable. (Yes, East Lake has a tiny field, but merely getting oneself in a position to win that week is a seriously mighty feat.) What I most struggle with in the pro-Rory case is his failure to show up at the majors. That suggests — nay, reveals! — a glaring chink in his armor. A mental breakdown. In the weeks that mattered most, he couldn’t summon his best stuff or even his near-best stuff. In my mind, the 79 at Portrush was the death knell for his POY chances. ‘Twas Brooks’ year.

Alan Shipnuck, senior writer (@alanshipnuck): Rory had a terrific year but sputtered when it mattered most. I’m sorry, but majors mean more. How many FedEx Cups did Bobby Jones win? Case closed.

Josh Sens, contributing writer (@joshsens): Koepka, and it didn’t strike me as especially  close. The man won a major, was runner-up in two others and 4th in the last. Even Rory said that Brooks deserved it. This vote has the feel of a high school popularity contest. Or, as Sean says, an election swayed by big money.

Josh Berhow, managing editor (@josh_berhow): Players are voting for two different awards — that’s the problem. Is it the best PGA Tour season, anchored by strong play in the PGA Tour’s marquee events? Or is it the best overall season where majors are weighted more heavily? How about this for some clarity: Rory won three times, including two majors, in 2014, yet when he was asked on Wednesday if he would rather have a season like he did last year or one like he did in 2014, he danced around the question. “Every year’s different,” he said. “I’ve already had a year like 2014. I might have a year like that again. I’m probably happier with my game, put it that way.” That answer was alarming, because I don’t think there is a pro on earth who wouldn’t exchange a three-win, no-major season for three wins that include two majors. But Rory knew if he said 2014 was better, he was essentially saying Brooks, not him, was more deserving of POY. I think that says it all.

Zak: I’ll wrap this up by citing Dustin Johnson circa 2018:

This campaign lost to Koepka and his 1.366 Strokes Gained because, you know, majors matter.