Early Tuesday morning, four foursomes went off the first tee of the Cypress Point Club. None of the 16 players needed an introduction — they were all U.S. Open winners — but Jim Nantz was on hand, in the starter role, just to give the proceedings even more of a stamp, if that were possible. He called to the tee Jack Nicklaus, Gary Player, Tom Watson, Tom Kite, Andy North, Lee Trevino, David Graham, Steve Jones, Retief Goosen, Geoff Ogilvy, Tony Jacklin, Jerry Pate, Tom Kite, Lee Janzen, Michael Campbell and Angel Cabrera. Talent! Nantz recalled how Watson chipped in on 17 at Pebble on Sunday at the 1982 Open.

“It’s only lucky if you’re not aiming at the hole,” Trevino said.

“You were playing the break,” Trevino said.

“I was playing the break,” Watson said.

The small group on hand listened and watched with awe and pleasure.

Trevino wears his charisma like a cologne. Just to watch him and Nicklaus chatting casually, as they did prior to the World Golf Hall of Fame induction ceremony Monday night, is like watching a scene from a movie. They speak a language you know, but will never really understand, because each understands the other’s experiences — under pressure, all alone, a U.S. Open trophy dangling in front of them — in ways the rest of us never will. 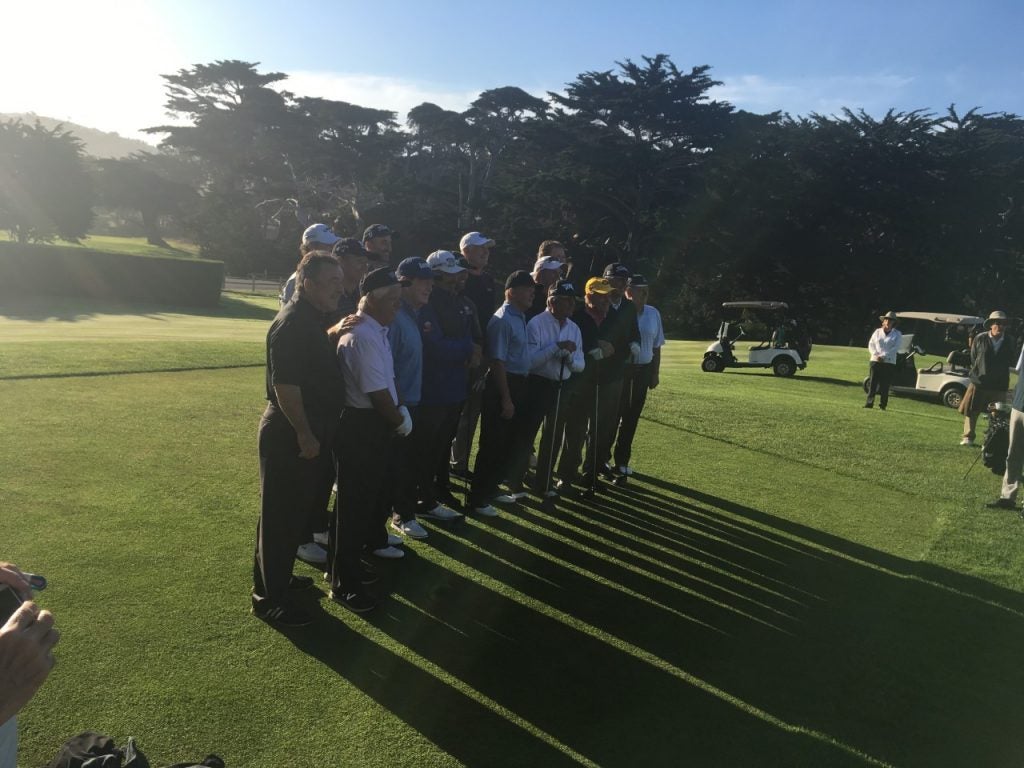 A special gathering of legends on the tee at Cypress Point.
Michael Bamberger

The best moment in the Hall of Fame induction ceremonies came when Dennis Walters, the trick-shot artist who is paralyzed below the waist, took a long minute to get up from his wheelchair, into his crutches and to the podium. The things we take for granted. Walters hits it as purely as anybody who has ever played. He got the laugh of the night when he mentioned Sam Snead in this snippet: “Ben Hogan watched me hit balls, Sam Snead told me dirty jokes and Byron Nelson stood so close to me that I had to ask him to take a few steps back.” When he was done, he went back to his wheelchair. Everything and nothing was different, but now he had Hall of Fame next to his name.

Ron Read is a longtime USGA executive, now retired, who spent years taking care of business on the first tee at a thousand national championships. Every weird thing that can happen on a first tee, from bad club-counting to late arrivals, this guy has seen. Read has been working on a book for years and Jim Nantz had the perfect title for it: I Started the U.S. Open. But Read went for something more USGAish instead: Starting the U.S. Open. The USGA events are not exactly hit-and-giggle, but this book looks like a good time.

William Porter Payne has three names for formal occasions, like his induction into the World Golf Hall of Fame Monday night, but around Augusta National, where he was the chairman for 11 years, locals referred to him not as Mr. Chairman, but as Billapayne. Billy Payne had a brief stint on golf’s national and international stage, but he made the most of it — the two amateur events he started, the many and dramatic campus changes he brought at Augusta, inviting women to join the club. But he showed keen self-awareness early in his remarks at the induction ceremony: “It’s Augusta National Golf Club that’s being honored here tonight.” Yep.

2. Stay the Course I

Dustin Johnson, his brother Austin and Butch Harmon went out for some evening golf at Cypress Point on Monday afternoon. The Johnson Brothers turned the par-5s into par-4s and a couple of the par-4s into par-3s. What else is new? It brings to mind what the late Sandy Tatum, a former USGA president and a longtime Cypress member, said when asked about what the club should do to the course to compensate for equipment changes: “Nothing.” Think about it.

Alan Shipnuck and I played Pacific Grove, a municipal up the beach from Pebble, on Sunday night. We started at six and finished on the last light of dusk. It opens with two par-3s, then two par-4s, then two par-5s. The back nine concludes on a swatch of pale earth that is the purest piece of linksland in the United States. The course is 5,700 yards and par is — who cares? We could not have had more fun playing anywhere else.