Ryder Cup standings: Who’s in and who’s out on Team USA?

This week’s PGA Championship is the final major of the year and also marks another important cutoff: The event is the final chance to accrue Ryder Cup automatic qualifying points. Jim Furyk, this year’s team captain, will announce the list of eight automatic qualifiers on Monday, Aug. 13 following the conclusion of play at Bellerive. Four captain’s picks will be selected in September; three after the Dell Technologies Championship (Sept. 3) and one more following the BMW Championship (Sept. 9).

The U.S. team picture gained little clarity coming out of the WGC-Bridgestone. Winner Justin Thomas was already a lock to make the team, while Dustin Johnson moved into the No. 1 overall spot with a T3 finish. The biggest move of the week came from runner-up Kyle Stanley, who jumped from 19th to 14th. Tiger Woods missed out on an opportunity to score valuable points with a pair of weekend 73s and remains in 20th. With one week remaining, who’s in, who’s out, and who needs a little bit of help to secure their place on the squad?

Four players on the U.S. side can book their tickets to France based on points alone; that would be World No. 1 Dustin Johnson (No. 1 in Ryder Cup standings), U.S. Open champ Brooks Koepka (No. 2), reigning player of the year Justin Thomas (No. 3) and Masters winner Patrick Reed (No. 4).

Three more players should feel comfortable scouring Yelp for the finest wineries in the countryside surrounding Le Golf National. It would take a perfect storm of events to unseat No. 5 Bubba Watson, who has three wins this season, while Jordan Spieth (No. 6) and Rickie Fowler (No. 7) are locks to be captain’s picks even if they slip outside the top eight.

Also in: the elder statesmen

Phil Mickelson (No. 10) and Tiger Woods (No. 20) are expected to be locks as well, though neither is currently inside the top eight. But Mickelson is fewer than 160 points behind No. 8 Webb Simpson. Woods, in addition to being arguably the greatest player of all time, missed the opportunity to accrue points in 2017, which he missed after undergoing surgery. Despite Furyk’s insistence that Woods will be treated like “any other player,” you can wager these two are headed to France.

Technically in… for now

That would be bubble boy Webb Simpson, who sits at No. 8 with 4,365 points. Given the number of points up for grabs this week, his 49-point cushion over No. 9 is anything but safe. Which leads us to…

On the outside looking in

The PGA Championship winner will earn roughly 4,000 Ryder Cup points, which means that nearly any Tour player in the field could lock up a team spot with a victory. Consider that Chad Campbell (No. 104) is currently less than 4,000 points from the top eight. The winner earns two points per $1,000 earned at Bellerive, while the rest of the field picks up 1.5 points per $1,000 earned. What all that means is there is plenty of room for Ryder Cup drama this weekend in St. Louis. 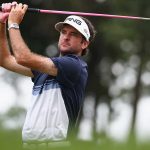 You may also like Expert predictions: Our staff picks PGA Championship winners and sleepers

You can find complete U.S. Team standings as well as the European team landscape HERE.