PEBBLE BEACH, Calif. — The last time Tiger Woods played a round at the U.S. Open without making a bogey (or worse) was also at Pebble Beach. It was on Sunday in 2000, and Woods was on his way to a 15-shot victory. For a while on Friday, it looked like he might stay bogey-free. Instead, he finished with two bogeys to post a one-over 72. He’s at even-par 142 heading to the weekend.

On Friday, Woods started the day at 8:24 a.m. local time at 1 under, five shots off Justin Rose’s lead. He wasted no time getting to 2 under after a birdie at No. 11.

Tiger pulls the string on the approach and sinks the putt for 🐦#USOpen pic.twitter.com/9xNLuFzzdU

The first blemish on his card came at No. 8, when Woods hit a 7-iron that came up well short of the green. He failed to get up-and-down, just the second time in 13 tries that he failed to do so through 36 holes. 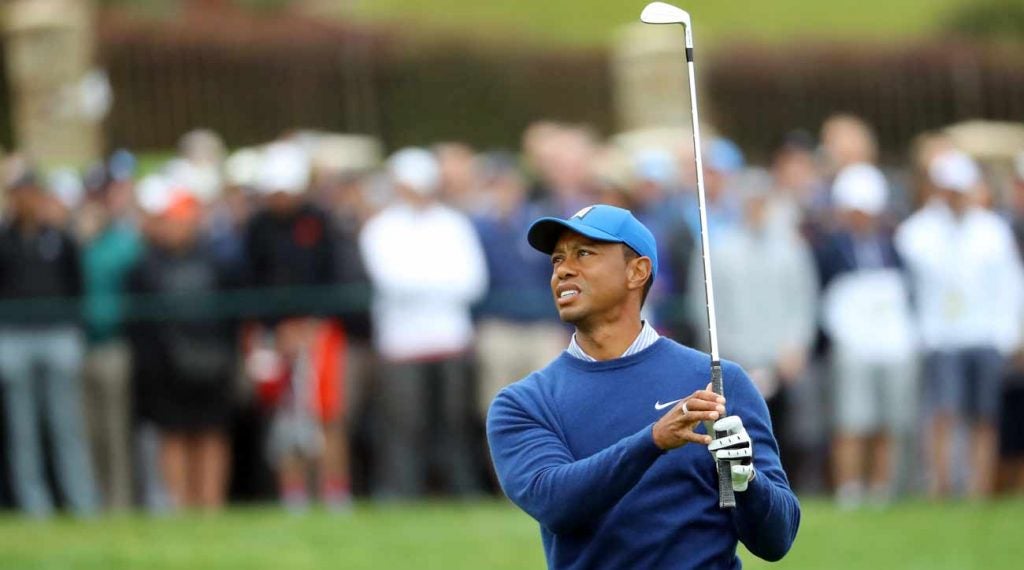 Tiger Woods stumbled at the end of Friday's round at Pebble Beach.
Getty Images

At No. 9, his final hole of the day, Woods hit his tee shot left into a fairway bunker and was forced to lay up, but he dumped his shot into the heavy rough. After a magnificent flop shot from there, he was left with an eight-footer for par, but never gave the putt a chance. He tapped in for a bogey-bogey finish.

On the day, Woods hit 11 of 14 fairways and 13 of 18 greens but didn’t get anything going with his putter. After gaining nearly four shots on the field on the greens in his opening round, Woods lost more than two strokes on day two.

After two rounds, Woods sits seven shots behind Rose but safely inside the cut line, which will likely fall around 2 over. He’ll need a Saturday rally if he has any hope of contending for his 16th major championship.