Check in every Sunday night for the unfiltered opinions of our writers and editors as they break down the hottest topics in the sport, and join the conversation by tweeting us @golf_com. This week we discuss the favorites for the U.S. Open at Pebble Beach, the best storylines no one is talking about, Tiger Woods’ chances, the greatest short par-3s in the world and more.

1. Rory McIlroy breezed to a seven-shot win at the RBC Canadian Open with weekend rounds of 64 and 61, but Brooks Koepka has proven he’s still the man to beat at Pebble Beach. Or has he? Is McIlroy the new favorite for the U.S. Open, and how does Rory’s game suit Pebble Beach Golf Links?

Sean Zak, associate editor (@sean_zak): Hooooo boy. It’s hard to look past that weekend Rors just had, but a Pebble Open just won’t play like the RBC Canadian. Sorry. Rory won’t be making 300 feet of putts at Pebble. If he strikes it like he did in Canada, yeah, he should contend, but this week is a different beast, and Brooks Koepka seems to have that figured out better than anyone. He’s still the man to beat.

Alan Shipnuck, senior writer (@Alan_Shipnuck): Both of their games are keyed by the driver, but they will largely have to holster theirs at Pebble, which with firm fairways will effectively play about 6,600 yards. Can either one of them separate themselves on this kind of finesse course? That would be massively impressive.

News
Our U.S Open picks to win at Pebble Beach

Jeff Ritter, digital development editor (@Jeff_Ritter): Rory is one of the few guys who can not only win a major, but win a major in a runaway. But his greatest major moments didn’t happen at setups like Pebble. (Also, they were, uh, five years ago.) He was awesome last weekend and he’s on the short list, but Brooks and DJ are still at the top for me.

John Wood, PGA Tour caddie for Matt Kuchar (@Johnwould): I think this tournament is wide open. Other than a couple of holes, I don’t think Pebble Beach can be set up as a bomber’s paradise. Will the driver be important? Of course. But I think we are going to see a leaderboard with every type of player imaginable. So yes, Brooks and Rory look great, but Pebble asks unique questions of you, and anyone on their game, long or short, can do well this week. 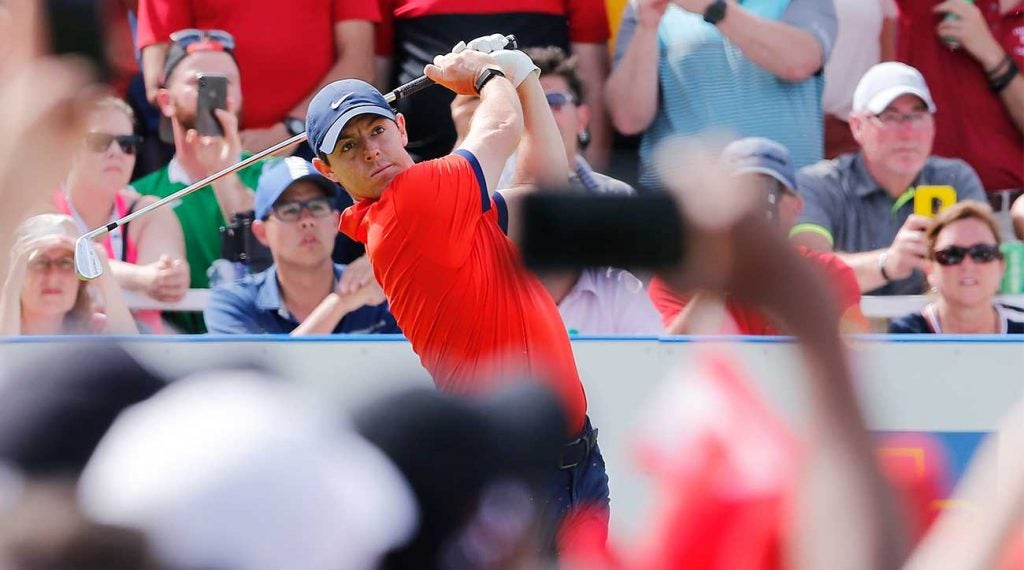 Rory McIlroy cruised at the RBC Canadian Open. Can he win his second U.S. Open a week later?
Getty Images

2. The last time Tiger Woods played he tied for 9th at the Memorial, and we already know he’s gotten some early work in at Pebble Beach. Where does Tiger finish?

Zak: Tiger finishes in the top 15, and let’s be honest, probably the top eight. We really have no reason to be worried about his game, and yes, I’ll own up to being critical of him after Bethpage. As colleague Dylan has said many times, he’ll manage his way thinking around this course better than 75 percent of the field. Or at least that’s how it seems, and I’ll gladly put my faith in that.

Shipnuck: No reason he won’t be there til the bitter end. With its tiny greens, Pebble is the quintessential second-shot course, and Tiger remains the best iron player in the game. We know he’s mentally tough enough to survive the mental rigors of the Open. I like his chances.

Ritter: This Open is suited for a wily veteran, and Tiger has so much course knowledge and previous success, you have to love his chances. But really, a second major title this season? I just don’t know if he can make enough putts on poa to punch through again. I think he’ll hang in the mix all week but never grab a solo lead, finishing somewhere around fifth.

Bamberger: Under par and in the hunt, but hard to see him shooting a lower score than Koepka here.

Wood: He’ll be top five with a chance to win. I think he’s the best poa putter ever, and he’s mentally tough enough to handle when he hits great putts that don’t go in. Not everyone is wired to show that patience.

3. Koepka has a chance to win his third straight U.S. Open this week, Woods is returning to the home of his most dominant major victory, Phil is eyeing the grand slam (again), McIlroy couldn’t be hotter and the USGA’s setup will be under close watch by players. But what great storyline is no one talking about?

Zak: Mr. Spieth. Rory burning down our golf neighbor to the north gave us another fun name to talk about, but for the last few weeks prior, we’d been discussing Spieth’s rise back to relevancy. Need I remind you he’s handled U.S. Opens before and he’s handled Pebble before. Will it click for four rounds?

Shipnuck: Dustin Johnson returning to the scene of the crime. It was his self-immolation on Sunday of the 2010 Open that began DJ’s star-crossed decade in the majors. He’s been right there at the last two – can he finally close the deal and begin rewriting his legacy?

Ritter: The way guys are shooting the lights out at majors — even brutal Bethpage just surrendered a 63 to Koepka — I wonder if a bunch of scoring records might fall this week if the wind stays down. There have been six 63s at U.S. Opens, including one in each of the past two years. I’m watching for not only a 62, but maybe even 61.

Bamberger: Koepka winning Stage II of the BK and the Sunshine Band Slam.

Wood: Every time I’m at Pebble, at some point during the week I look around and say to myself, My god this is beautiful. This may be a milquetoast response, but that’s a story to me. Other than Augusta, it’s my favorite course to look around and think about the history of the place. Jack hitting the stick on 17 with a one-iron in ‘72. Tom holing the chip on 17 to edge Jack in ‘82, then turning to our old friend Bruce Edwards with that Huckleberry Finn grin, pointing and saying, “I told you!” Tiger playing golf at the highest level it’s ever been played for four days, and the look on his face when he was already leading by a hundred on Sunday, making a 12-footer for par on 16 like he’d just taken a one-shot lead. This is a Special place.

Allow the rough to be your defense. Allow the wind to help out. Do not allow the short stuff to teeter on unplayable. I think it’s really as simple as that.

4. So much has been said about the USGA and its U.S. Open setups over the past few weeks — and we touched on that in this space last week as well — but how should the governing body set up Pebble Beach? And look into your crystal balls and make a prediction: Come Sunday night, will the USGA and its management of the event be a non-story, somewhat of a storyline of dominate the post-Open chatter?

Shipnuck: I’ve been walking Pebble a lot in the last few weeks, often with my pooch, and the greens look mint. Can the USGA resist the urge to push the greens to the edge and compromise them? You have to think they’ve learned some hard lessons, but we say that every year. It was a wet(ish) spring so the course is very green and the rough extremely thick, as it should be. We’re presently having a mini-heat wave so the course is firm and fast. I am choosing to believe the USGA can’t screw this one up.

Zak: Allow the rough to be your defense. Allow the wind to help out. Do not allow the short stuff to teeter on unplayable. I think it’s really as simple as that. Shots that find the short stuff should be rightfully rewarding.

Ritter: Agreed with everything above. Make hitting fairways the first true test, and don’t take the greens to the edge. It’s a hard line to walk though, because like I said earlier, I could see a 62 if conditions are soft. Then what will everyone say about the USGA?

Bamberger: Tight pins without going crazy, which you can do here better than most places. Also, let ‘em play.

Wood: I think it’s going to be a classic U.S. Open. I don’t know why, I just have a really good feeling about the week from a setup point of view. Pebble Beach with a bit of wind, firm and fast, with 1/2-shot penalty for drives ending up in the rough is a pretty great formula. They USGA is due to hit one out of the park, and I think this is the week.

5. This is the sixth time that Pebble Beach has hosted a U.S. Open. Graeme McDowell won the last one in 2010, which followed Tiger’s triumph in 2000. (Pebble is also scheduled for the 2027 Open.) Where does Pebble Beach rank when it comes to the best U.S. Open venues?

Shipnuck: Oakmont is probably the best pure Open venue, because of its long history and because it’s just so demanding on every shot. But given the beauty, the dramatic shot values, and the era-defining wins in ‘72, ‘82, ‘92 and ‘00, I put Pebble at the top of my list.

Zak: Maybe a couple places behind Erin Hi— JK! I LOVE when the United States Open visits a course EVERYONE in the United States can play. So give me Pebble and Pinehurst above all else. And you know what? Give me that course that the PGA of America won’t be able to host its premier event at anymore, Whistling Straits. For most folks, this event isn’t about that, but that’s what I like most about it.

Ritter: Love Oakmont. Love Pinehurst. Shinny was cool. Hope someday to return to Chambers and Erin Hills. But Pebble ranks No. 1 for me.

Wood: I’m a NorCal guy, so for me, Pebble is No. 1. There’s a romance and a poetry to Pebble Beach that doesn’t exist at other U.S. Open venues. There are plenty of great courses in the rotation, but watching a champion being crowned walking up 18 with the waves crashing on the rocks and everyone a bit windburn in the salt air — I don’t know I just don’t think you can beat that.

6. The par-3 7th at Pebble Beach will get plenty of publicity. It’s the shortest hole on Tour, but is it the best short par-3 in the world? If not, what is?

Bamberger: The 15th, Cypress Point Club. Because of the aroma, and the memories.

Shipnuck: It’s probably the most fun, because of the setting, but unless the wind is really howling it’s a relatively easy par. I would vote for Augusta National’s 12th, because it’s so do-or-die and it comes at the perfect moment in the round.

Zak: No. 11 at Shinnecock is harder than 12 at Augusta (I think?), so I’ll use that as my answer until I play Amen Corner.

Ritter: Here’s the correct answer, the par-3 12th at Manele.