Why the U.S. Open police officers have the best seat in the house

PEBBLE BEACH, Calif. — Louis Arroyos walked briskly down the right side of the 16th fairway on Thursday afternoon. As the walking security guard for the Rickie Fowler, Jason Day and Si Woo Kim trio, it’s his job to keep up with the group and make sure players are safe.

As Arroyos reached the fairway a USGA volunteer leaned in from over the ropes. “Thank you for your service,” he told him. Arroyos appreciated the gesture, but it’s not like this week is a chore for him. As a huge golf fan, he’s got the best seat in the house.

“It’s awesome; it’s the best,” he said. “It’s so much fun — especially if you enjoy golf. You get to see first-hand how they communicate with their caddies. You usually don’t get to see that.”

Arroyos is one of hundreds of police officers who will walk inside the ropes with players, caddies, sign bearers, media members, photographers and more this week. Some groups don’t have guards, while other players — like Tiger Woods, Brooks Koepka, Phil Mickelson and Jordan Spieth, to name a few — are assigned two officers. That means super groups — like the Woods-Spieth-Justin Rose grouping on Thursday and Friday — will have at least four officers to keep the galleries at bay. 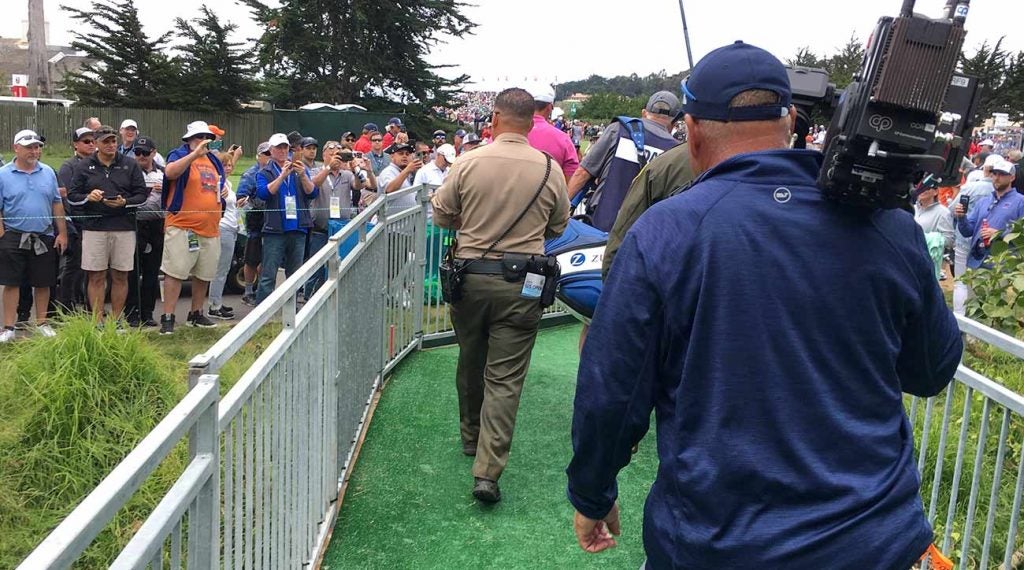 Officer Arroyos walks behind Jason Day and caddie Steve Williams (and in front of a cameraman) on his way to the 17th tee box on Thursday at Pebble Beach.

Arroyos, 36, is a golf nut. He’s a 12 handicap — “I wish I was better,” he says — and knows the game and Pebble Beach. He’s played here once before and will again in August. The Bay Area native now works for the Monterey County Sheriff’s Department. He’s worked three Pebble Beach Pro-Ams but this is his first major. On Thursday he happily chatted with fans who asked him questions (and reporters) and also played the part of TV analyst after several shots.

“Hands down, this is the best, dude,” he says. “I’ve been looking forward to this since last year.”

Arroyos said he expressed interest in working the U.S. Open early and that helped him get his pick of groups to follow. Earlier this year he was in Day’s group for the third round of the Pebble Beach Pro-Am and instantly became a fan. He said the Aussie is down to earth and a great guy. He requested to be back in Day’s group for Sunday of the Pro-Am, and he picked the Day-Fowler-Kim trio for today’s first round. But he’s also pulling double duty — he worked himself into the Woods-Spieth-Rose grouping this afternoon. He’s with the same groups on Friday, and he’s working the weekend, too. His friends will be here then and plan to follow the groups he’s assigned to. They’re jealous, he says. 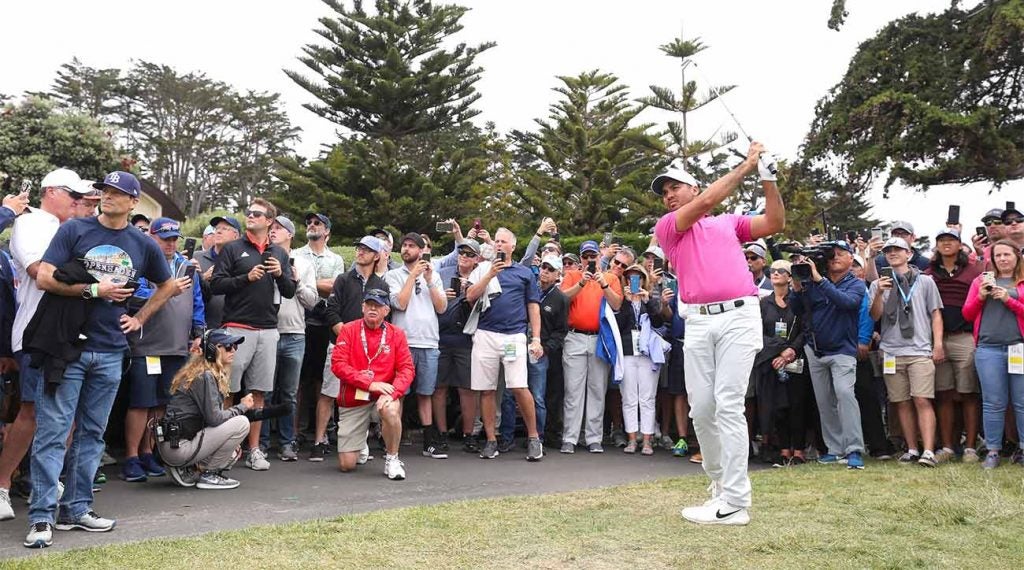 The duties for inside-the-ropes officers are pretty self-explanatory. Officers meet players on the range and follow them until their rounds are over (they also get paid overtime). Their job is to keep them safe from unruly fans, while USGA volunteers handle crowd noise.

His morning group was one of the most popular on the course, since Fowler is always a major draw. But he was ready for more afternoon craziness following Woods and Co.

“It’s probably going to be like this,” he said, speaking over the gallery yelling at Fowler while walking to the 17th green, “but on steroids.”

Fifteen minutes later, Day rolled in a 13-footer for birdie on the 18th to shoot 70. Behind the green Arroyos fist-pumped. “That was huge,” he said. A few minutes later players gave the teenage sign bearers autographed golf balls. Guards aren’t supposed to ask for balls or autographs, but that doesn’t bother Arroyos.

“For me just doing this in general is worth everything,” he says. “You can’t beat it.”

After Day signed his scorecard he met with a few reporters and then hung out near the flash area talking with members of his team and new caddie Steve Williams. Then he hopped in his courtesy car. He was headed to the practice area.

Arroyos leaned in toward the back-seat door and shook Day’s hand once more. “Good luck tomorrow,” he said. It was 1:10 p.m., an hour before Woods’ 2:09 p.m. tee time. And just like that Officer Arroyos was back on the clock.