PEBBLE BEACH, Calif. — John Bodenhamer paused for a beat before answering the question that’s weighed heavily on the USGA in the lead-up to this week’s 119th U.S. Open Championship. How important is it that you have a smooth U.S. Open this week?

“I think it’s critical,” said Bodenhamer, the USGA’s senior managing director of championships. “But, again, I will say, we feel good about our plan. We feel good about what you see on the golf course and what we’re going to present to the players as a tough but true test.”

Speaking to the media on Wednesday in their annual pre-event press conference, Bodenhamer and USGA CEO Mike Davis fielded eight questions related to Pebble’s setup and player input. That, along with Tiger Woods’ return to Pebble and Brooks Koepka chasing his third straight Open, has been among the most discussed topics in the last two weeks. 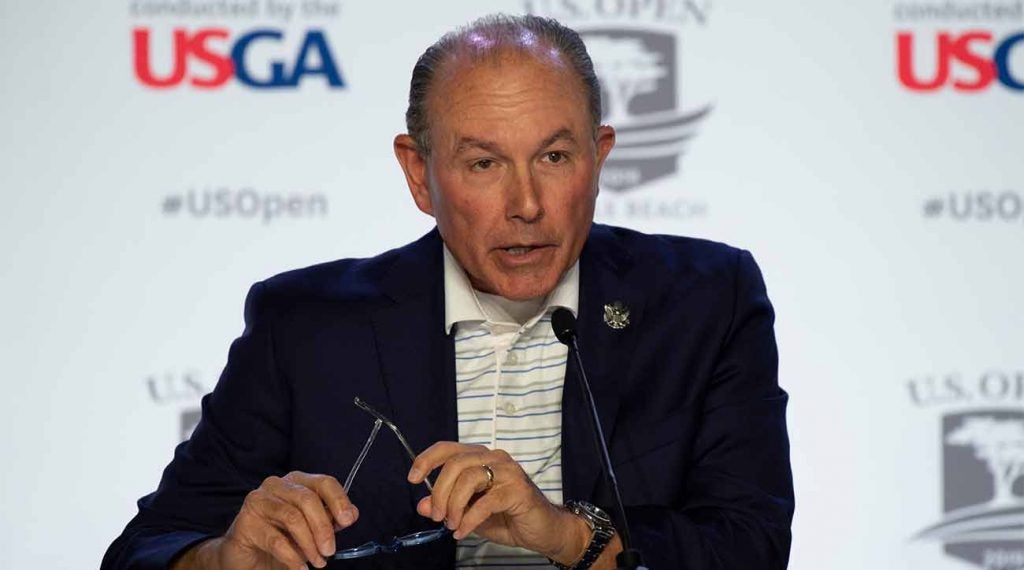 John Bodenhamer speaks to the media on Wednesday at Pebble Beach.
USA Today

In the past few years the USGA was criticized for course conditions at Chambers Bay (2015) and Shinnecock Hills (2018), a rules controversy at Oakmont (2016) and, in the eyes of many skeptics, a very un-U.S. Open-like course selection at Erin Hills (2017).

“I think they’ll admit they’ve made a couple of mistakes over the last couple of years,” Rory McIlroy said two weeks ago at the Memorial. “Everyone does. And I think we should give them the chance to redeem themselves. If they can’t redeem themselves at Pebble Beach, then there could be a problem.”

Tour-winner Jason Gore has since been hired as a liaison to work with players. Bodenhamer and Davis praised his contributions on Wednesday. While Bodenhamer didn’t say that their philosophy has changed when it comes to setting up the national championship, he said safeguards are now in place (including the potential to syringe the poa annua greens between morning and afternoon waves, to keep them fair). He also knows all eyes will be on him and his crew — Bodenhamer is in his first year as the man leading the setup, a post he inherited from Davis. “One of our past champions told me he didn’t envy me in this position,” Bodenhamer joked.

Features
Can U.S. Open complainers contend? An unscientific study of the intersection of whining and winning

More heat was put on the USGA when Golf Digest recently published an anonymous player survey in which many players were critical of the USGA. Some players even discussed boycotting the event completely. Davis said he read the piece but chose not to comment on it.

“We have decided we’re going to take the high road on it,” Davis said. “We’re focused on this week and moving forward. So I’ll just leave it at that. Certainly, it’s in everybody’s best interests to really look forward and make sure that this championship is conducted in the most favorable manner as it possibly can.”

“We will continue to endeavor to provide the toughest test, the ultimate test, the most comprehensive test, whatever you want to call it, and really just to create something where players’ shot-making ability, mental resolve, physical stamina are tested,” Bodenhamer said. “We’re not going to lose that. It has been something that we’ve done for many years and will continue to do that. We think we’re creating something special, and we don’t want to lose that.”