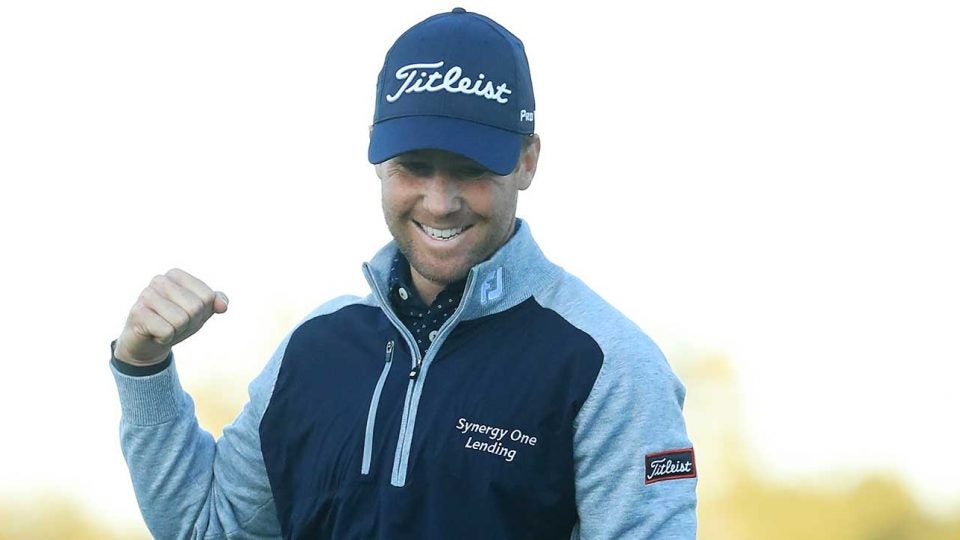 Tyler Duncan pumps his fist after making a birdie during the final round of the RSM Classic. Duncan won in a playoff.
Getty Images

Brendon Todd held the 54-hole lead at the RSM Classic and was threatening to become the first player to win three consecutive weeks on the PGA Tour since Tiger Woods in 2006. Todd, who was at 18 under, was two ahead of Webb Simpson and Sebastian Munoz (with Tyler Duncan also lurking). Here’s what you missed in the Fall Season finale.

How it happened: Simpson, the only 2019 U.S. Presidents Cup member playing on the weekend, made birdies on 1 and 3 and, after Todd made bogey on 5, led Munoz and Todd by two at the turn. Simpson made four straight pars to start the back nine but he failed to get up and down after missing the green on 14 and made bogey, dropping into a three-way tie at 17 under with Tyler Duncan and Munoz. All three then made birdies to get to 18 under, and Simpson made the second of his back-to-back birdies on 16 to get to 19 under. But Duncan birdied the 18th to match Simpson at 19 under and take the clubhouse lead. Simpson and Munoz both teed off on 18 with the tournament title within reach. Simpson could win with a birdie, and Munoz could enter a playoff with a birdie (as long as Simpson made par or worse). Munoz missed his birdie putt, and Simpson two-putted for par to force the playoff. Both players two-putted for par on the first playoff hole (the 18th), but Duncan made birdie the second time around to win the playoff.

Why it matters: It’s the first PGA Tour victory for the 30-year-old Duncan, and it came in his 68th career start. Before Sunday he had only three top 10s and never anything inside the top three. He’s now fully exempt on Tour through the 2021-22 season, and he’s also got an invite to the 2020 Players, Masters and PGA Championship. “I’m just so happy to be here playing, and to come out here and win is just unbelievable,” Duncan said.

Best putt: One off the lead playing the 18th hole, Duncan drained a 25-footer for birdie — his third in the last four holes — to shoot 65 and tie Simpson for the lead. That was good enough to force a playoff after Simpson went par-par over the final two holes.

Costliest hole: Todd started the day with four straight pars but took a disastrous double bogey on the par-4 5th. After finding the fairway he pushed his second shot into the native area right of the green. He had to drop and it led to a 6, which at the time left him two back of Simpson. Todd shot 72 and finished 4th.

Up next: The PGA Tour takes a rare week off next week, and that will be followed by the 18-person Hero World Challenge, which is hosted by Tiger Woods, on Dec. 4-7 in the Bahamas. The Presidents Cup kicks off the following week in Australia.