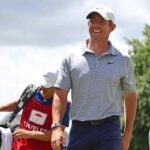 Rory McIlroy is on a hot streak.

The first round of the 2022 Travelers Championship is in the books, and one of the game’s biggest stars shares the top spot on the leaderboard.

Check out the complete leaderboard here.

Here’s what you need to know from the first-round action in Cromwell, Conn.

Betting favorite Rory McIlroy shares the lead with J.T. Poston at eight under par after Day 1. That’s a round of 62, folks!

McIlroy contunued his recent hot streak with a bogey-free round at TPC River Highlands, while Poston did the same. Poston’s round was highlighted by a back-nine 29. (!)

Despite the ultra-low scores, the two share only a one-shot advantage over their closest competitors.

Speaking of closest competitors, the players who happen to be only one shot back are Xander Schauffele and Martin Laird. Three players are two shots back at six under overall (Charles Howell III, Webb Simpson and Patrick Cantlay), and two more are three shots back (Cam Davis and Matthew NeSmith). There are 18 others within five shots.

It seems that when the scoring is this low, no lead is safe. Cue the drama!

What about Scottie Scheffler?

The U.S. Open runner-up and PGA Tour record-breaker was the other betting favorite this week, along with McIlroy.

Scheffler made three bogeys and one birdie to sign for a round of two-under 68 — by no means out of the mix, and currently T28.

Check out the tee times for the second round here.