Tour Confidential: Do short hitters have enough chances to win on Tour?

Check in every Sunday night for the unfiltered opinions of our writers and editors as they break down the hottest topics in the sport, and join the conversation by tweeting us @golf_com. This week we discuss the “short hitters” competing on the PGA Tour, the next big stars in golf, new Tour venues ready to debut, the aftermath of the 2018 Ryder Cup and more.

1. Chez Reavie picked up his second PGA Tour title Sunday, cruising to a four-shot win at the Travelers. Reavie averages “only” 286 yards off the tee, which puts him outside the top 150 on Tour in that category. Do short hitters have enough chances to win on Tour?

Luke Kerr-Dineen, instruction editor (@LukeKerrDineen): Power has always been an important part of golf. People used to talk about Bobby Jones’ booming drives, and Slammin’ Sammy Snead. The modern era is no different in that regard, but unlike those days, the difference nowadays is that power all too often goes unchecked. Short, straight drivers are punished disproportionately more than longer, more wayward drivers. That serves to strip the game of its diversity by creating a prototype of how players must play, swing, and be. The more golf can figure out ways to level the playing field for equally good — but different — types of players, the game will be better off for it.

Josh Sens, contributing writer: As Luke says, bombers have always had an advantage. But look at the Tour’s list of winners this year (Kisner, Kuchar more than once, Justin Rose, Francesco Molinari). There’s been plenty of opportunity for the non-bombers to win. Sure. The game can take some steps to level the playing field by choosing certain venues and setting them up in certain ways. But the Tour remains enough of a meritocracy for me — the golfer who golfs his ball the best still has plenty of chance to win, no matter how far he hits it. No need to start legislating beyond that out of some exaggerated sense of “fairness.” Should the NBA start lowering the hoop to make it easier for everyone to dunk?

Jeff Ritter, digital development editor (@Jeff_Ritter): I’m with Sens here. Big drives can take you places on the PGA Tour, but so can great putting, iron play, scrambling, and an unshakable mental game. Occasionally there are course setups that skew to the mashers, but overall I think shorter hitters have a shot. They just have to find other ways to get it done.

Michael Bamberger, senior writer: The shorter the course, the more chance there is for more players. Twenty-plus years ago, Nick Price said the best way to Tiger-proof the courses was to make them shorter. He had it correct and nothing has changed. The game is better in every possible way (for the pros) at 7,152, but fellas and chicks dig the long ball, so we all know how that goes. There will be fewer chances for shorter hitters in the future, but there will always be an Open championship. God Save the Queen. Where have you gone, Larry Mize? By the way, his swing was beautiful, back in the last days of the Rhythm Method. 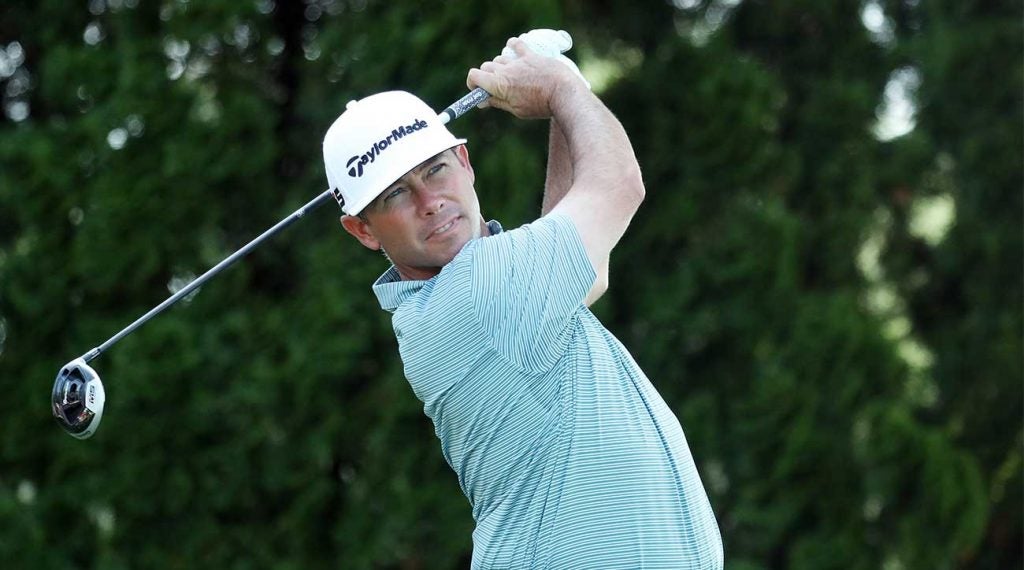 Chez Reavie tied for 54th among those who made the cut in driving distance at the Travelers, but that didn't stop him from winning.
Getty Images

2. Two of the game’s most promising up-and-comers turned pro prior to the Travelers Championship: reigning U.S. Amateur winner Viktor Hovland (T54), and reigning NCAA individual champion Matt Wolff (MDF). Which of these players is best equipped to make the leap from rising star to superstar?

Kerr-Dineen: They’re both going to be awesome, but my money’s on Hovland. He’s in slightly better form at the moment, and thinking longer term, his swing does so many of the things that modern golf coaches teach. It’s why I’m already on record calling him Dustin Johnson 2.0. I meant it at the time, and I mean it again now.

Sens: So hard to predict, but also very hard to go against Hovland given what he’s shown so far. Love the fact that they both so beautifully own their idiosyncratic-looking swings. Not the same all youthful Robo-pros.

Ritter: I’m still getting acquainted with both, but Hovland has had more screen time lately and certainly has a star-in-waiting quality to his game. I’d also toss Collin Morikawa into this mix — another new pro who looks ready to win sooner rather than later.

Bamberger: I have no idea but in the spirit of the foregoing I’ll say Matt because I like different — different with a reason — and his swing is.

Kerr-Dineen: I don’t have any data to support this, but I suspect not very. It’s really all about the field. Give it a few years to settle into the schedule. If the field doesn’t start getting stronger, that’s the first meaningful red flag.

Sens: I’m with Luke here. These guys will play on an airport tarmac if the schedules align and the money is right. Less about the venue may be part of the allure, but it’s not the deciding factor.

Ritter: I’m not overly worried about the first year, but hopefully the course setups are fair and interesting. You don’t want the venue to turn off the players. Both events are in golf-starved areas, so no one should sweat the fan turnout.

Bamberger: The second Masters was the one that made the difference, although the first U.S. Open was pretty special. I’ll say first impressions are always important, if not critical.

Tournaments
The feel-good story of the week is Zack Sucher: ‘Two months ago we had credit card debt…we don’t have that anymore’

4. The first Ryder Cup in France reportedly did little to elevate the sport in the area. According to French news agency AFP, the French Golf Federation has seen just a 2.5 percent increase in membership registration since last summer, and one golf tourism manager said “nothing has changed.” Many questioned France’s appetite for the sport even before the Ryder Cup came last fall. Does this new report suggest venues should be moved to more golf-friendly areas?

Kerr-Dineen: Pro golf doesn’t really work like that. Even during Tiger’s heyday, we didn’t see the vast influx of new players into the recreational side of the sport that many predicted. Why? Because the Ryder Cup being in France, in this instance, doesn’t change the underlying obstacles preventing newcomers from becoming “golfers.” Golf is still expensive, a big time commitment and really difficult for beginners. Pro golf shouldn’t be expected to solve those problems, and that’s not what bringing the Ryder Cup to France was about. It was about creating a golf culture in the country. It’s not about measuring the sugar high, it’s a longer-term vision.

Sens: Luke is right. It’s “expensive, a big time commitment and really difficult for beginners.” And I feel the same way about dining out in Paris. But I loved the fact the Ryder Cup was staged there. Spread the love, make it an entertaining event. In that regard, mission accomplished.

Ritter: I’m interested to know what else, if anything, France has done to spark a golf revolution besides host a one-off Ryder Cup? Are there new, affordable public courses? Did existing courses drop prices? Any private clubs go public? What about junior programs? Hard to expect any meaningful growth without some of these other elements clicking. As for hosting in golf-friendly areas, I thought Le Golf was a cool venue with a fantastic, global crowd. You can probably host the RC at any worthy course on the continent and still pull it off.

Bamberger: It’s good, fun, interesting and appropriate to spread the Ryder Cup through Europe, and a 2.5 percent increase in membership registration I think is significant. Now, to keep those golfers in the game, that’s another matter.

There's such an inherent bias toward the big three American sports that [Koepka's] accomplishments over the past 12 months will be overlooked.

5. Brooks Koepka was among the four ESPY nominees for Best Male Athlete, going 1-T2-1-2 in his last four major starts. Give your pitch to the committee on why Koepka should (or should not!) be the winner.

Kerr-Dineen: Yes, of course Brooks Koepka should win this award, for reasons so obvious that I won’t even bother explaining. But he won’t, because there’s such an inherent bias toward the big three American sports that his accomplishments over the past 12 months will be overlooked. Greater sports fandom won’t truly appreciate the gravity of his achievements, even though golf fans understand them fully. (Tiger Woods stealing the spotlight temporarily and winning the Masters also doesn’t help Brooks’ cause.)

Sens: I’m going to cop out here and say they should have different categories for individual and team sports. Comparing the performance and impact of, say, Mookie Betts (another nominee) with that of Koepka’s is apples and oranges. But for an athlete going it on his own, Koepka for sure.

Ritter: Koepka has been awesome, and he’s an easy pick over Giannis and Mahomes, each of whom won nothing last year beyond the titles for their fantasy team owners. But Mookie Betts probably deserves this one: he became the first MLB player to win an MVP, a batting title, a gold glove and a World Series in the same season. It is indeed apples to oranges, but as good as Brooks has been, Betts made history.

Sens: Well, as a lifelong Sox fan, I won’t argue that point with you, Jeff.

6. After Gary Woodland’s nifty pitch-and-par from the green on the 17th hole of the final round of the U.S. Open, which essentially clinched his win, our Josh Sens broke down the do’s and don’ts of chipping off a green. What’s another shot that pros can pull off that average golfers should not try at home.

Kerr-Dineen: Any shot that involves removing items of clothing and stepping into a water hazard.

Sens: Or simply removing articles of clothing anywhere. That, and the John Daly maneuver of smacking a tee shot from a drunk guy’s mouth.

Ritter: Any shot that requires about 30 yards of right-to-left or left-to-right curve to it. It’s stupefying how well the pros can shape their shots.

Bamberger: Righthander playing a shot lefthanded with the toe facing down. Any shot off a cart path. Teeing off a pencil to carry a tree. Intentionally playing into the wrong fairway. Intentionally skipping a shot over a water hazard. The Woodland-Tiger stinger. Chipping with a hybrid. Taking out the flag on any chip shot. Hitting a ricochet shot off the wall on the Road Hole. Aiming for the second “O” on the tee shot there. I beg to differ with my distinguished colleague from the great state of Michigan. Many ordinary righty golfers can hit a left-to-right shot with 30 yards’ worth of curve, in my experience.