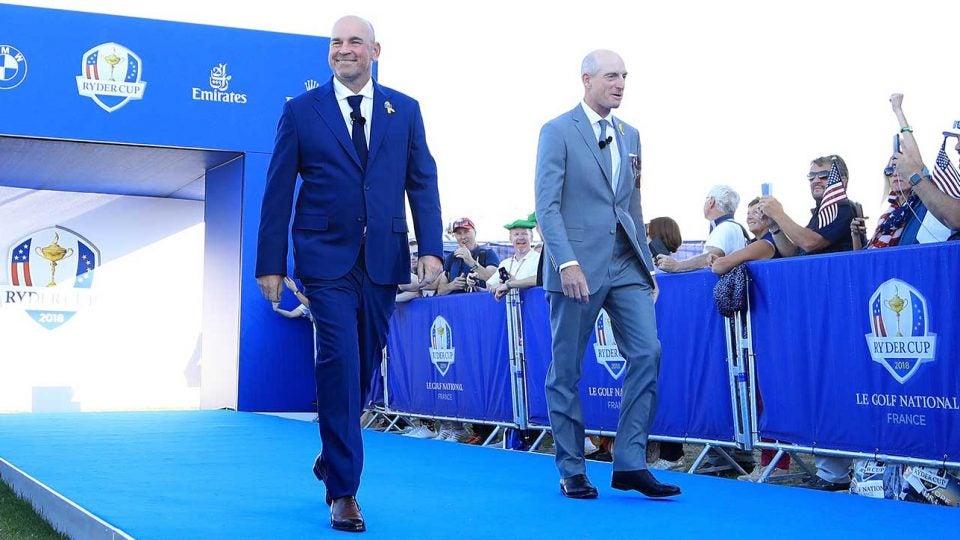 GOLF.com conducts a weekly roundtable with its staff to break down the game’s hottest topics every Sunday evening. This week for the Ryder Cup we are answering one burning question each night. Check back for the unfiltered opinions of our writers and editors and join the conversation by tweeting us @golf_com.

The four Friday morning fourball pairings were announced by the captains on Thursday evening, and there were a few surprises. Longtime European partners Justin Rose and Henrik Stenson aren’t together, and the same goes for the dynamic American duo of Jordan Spieth and Patrick Reed. Phil Mickelson and Ian Poulter are also among those benched on Friday morning. Do you think the captains made any strategic errors with any of their Friday morning pairings?

Sean Zak: I’m going to give Furyk the benefit of the doubt for now and note he played eight of his nine best golfers in this session. Can’t complain about that. Bjorn is clearly making a point to get all of his players into a match sometime Friday. Also can’t argue with that, but I would have let Olesen get his feet wet later and instead would have paired Sergio, Stenson or Poulter with Rory. Any of them with Rory would feel like a heavyweight.

Dylan Dethier: Wait, does this mean we’re going to see Phil in alternate shot? With Bryson?! From a strategy perspective, that seems sketchy. From an entertainment standpoint, on the other hand…

Michael Bamberger: I don’t know. I would say the U.S. teams look stronger one through four. As far as the Spieth-Reed breakup, better too early than too late. And it’s not forever anyhow.

Jessica Marksbury: The only match that seems to have barnburner potential is Koepka/Finau and Rose/Rahm. Team USA appears to have the advantage on paper here. Team Europe’s pairings, save for the first one, seem a bit, well, meh.

Josh Sens: I realize that predictions are the point here, but strategic errors in the Ryder Cup only become clear in retrospect, during that familiar post-mortem when sports fans and pundits get to pretend that they saw it all coming from the start. That said, I don’t mind the Spieth/Reed breakup, especially given who they’ve been paired with. Jordan/Justin makes perfect sense, in theory, as does Woods/Reed. Now let’s see how they play out. One thing, though: as a whole, I suspect my colleagues have slipped into a longstanding American tradition of underestimating the competition.

Jeff Ritter: Leaving Phil for alternate shot feels like an error, but overall I like those U.S. pairings, and as Bamberger said, each match appears promising. Bjorn must plan to empty the European bench on Day 1. That could work, or lead to disaster.

Josh Berhow: I’m with Sean here. I can understand splitting up Spieth and Reed because the new partners (for at least one match) make sense, but I would have paired Rory with someone like Rahm or Fleetwood or Poulter. Most people think the Europeans are the underdogs. Trot out another big swanky name to pair with McIlroy and make a statement early.

Luke Kerr-Dineen: Thomas Bjorn played his first hand as captain masterfully, and deserves credit for it. He’s blooding four of his five rookies early in the easier fourball format, and paired them all with more experienced Ryder Cuppers. The only one he didn’t play – Alex Noren – has an outstanding record on this course and is probably a better fit for alternate shot anyway. The Europeans will end up walking away from the first day with a great read on who’s playing well, and with everyone getting a taste of the nerves. Furyk’s moves? I’m not so confident. Pairing your big guns together only makes sense if they actually win. If Tiger and Reed only manage a half a point – or heaven forbid, zero points – in their match together, that’s a pretty terrible return from two of your best players that could’ve potentially won two points if you split them up. Everything else basically makes sense, but Furyk stacking his cards like this seems to suggest two things: Phil Mickelson playing in alternate shot, and a Bubba Watson and Webb Simpson foursomes pairing – both of which seem like disasters waiting to happen.