Check in every Sunday night for the unfiltered opinions of our writers and editors as they break down the hottest topics in the sport, and join the conversation by tweeting us @golf_com. This week we look ahead to the FedEx Cup Playoffs, discuss Tiger Woods’ chances, break down Sergio’s latest meltdown and more.

1. Following his missed cut at the Open Championship, Tiger Woods returns to action at this week’s FedEx Cup Playoffs opener, The Northern Trust at Liberty National in Jersey City, N.J. It’s the first of two straight starts for Woods, who isn’t yet guaranteed a spot in the Tour Championship three weeks from now. With an epic Masters victory anchoring his case (but not much else) and two or three starts remaining, could Woods still win the Tour’s Player of the Year award, an honor which is decided by the players themselves? Or can we just hand the award to Brooks Koepka now?

Josh Sens, contributor (@JoshSens): Give it to Brooks, baby. This isn’t an award for best story, or greatest sentimental lift. It’s an award for dominant play. No one has come close to Koepka.

Sean Zak, associate editor (@sean_zak): Anyone who thinks Tiger deserves this award is thinking with their heart, not their head. It’s cut and dry. No player was better than BK all season long.

Jeff Ritter, digital development editor (@Jeff_Ritter): Leaving Augusta back in April, I thought you could etch Woods’ name onto the POY trophy right then and there. (Side question, is there actually a POY trophy? I can’t picture it.) But by the time Koepka rang up yet another major top five at Portrush, Tiger’s case was on life support. Brooks then closed the argument with his win in Memphis. I still think Tiger’s triumph at Augusta completed the greatest personal and professional comeback in sports history, and I suppose if he somehow won two of these last three events, including the FedEx crown, we could at least — maybe — re-open the debate. But Koepka has earned this POY.

John Wood, PGA Tour caddie for Matt Kuchar (@Johnwould): Yeah, you can hand it to Brooks now, unless, say, Tiger or Gary ran the table with three straight Ws in the playoffs. Even then, it would be hard to envision anyone but Brooks being POY.

Michael Bamberger, senior writer: I’m with John — Woodland would have to hat trick here, and Tiger win two to even have a conversation about anyone other than BK. 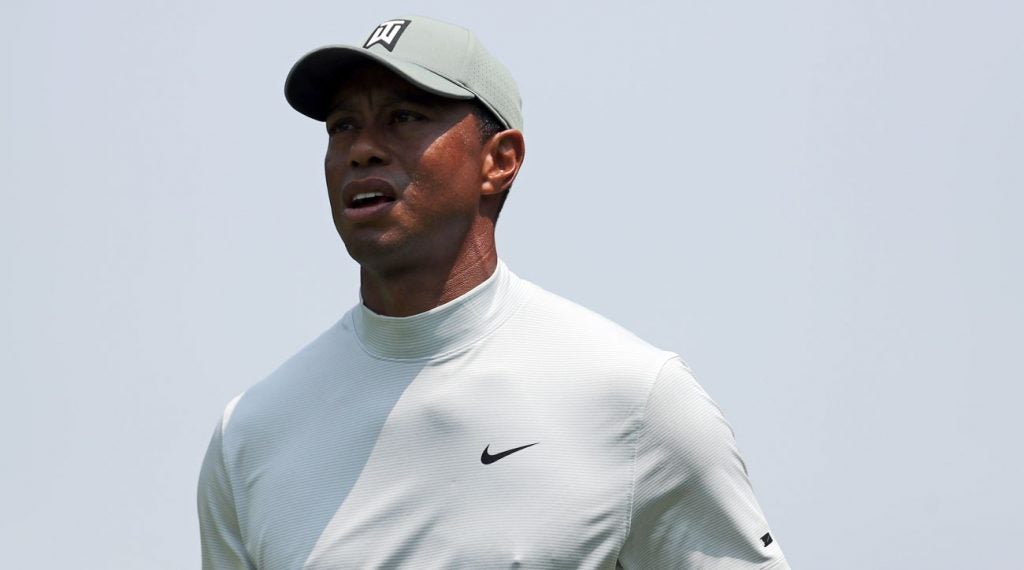 Tiger Woods will try to qualify for the Tour Championship, where he's the defending champion.
USA TODAY

2. The Northern Trust field was finalized with the top 125 in the FedEx Cup standings following Sunday’s Wyndham Championship. Which name are you most surprised to see didn’t qualify for the playoffs?

Zak: We should never really be surprised by this, considering we’re following it every week, but Zach Johnson is a name I would have pegged to make it at the beginning of the season.

Ritter: ZJ was unexpected, for sure. I also had both Beau Hossler and Peter Uihlein on my dark horses list back in January and am surprised their seasons were clunkers.

Wood: Zach would be first in my mind. He’s been so consistent for so long. I’m sure he’ll get things straightened out and bounce back in 2020.

Bamberger: Well, the name comes to mind because I saw him the other day, but Jim Herman. I would have thought winning a Tour event would get you in the top 125, but not the event he won (Barbasol) and not with the futility he had in almost every other event.

3. Almost complete with the first full year of the new schedule, does the major season ending earlier give the playoffs any more juice?

Sens: Generally speaking, the amount of natural juice in an event is inversely proportional to how much time its promoters spend talking about the prize money. In the buildup to the Masters, is the purse ever the foremost thing on people’s minds? The playoffs have always been hard to get too worked up about. This year is no different. The public’s rightful apathy toward them is just coming a little earlier in the calendar.

Zak: A little more juice. Maybe a cup full. As long as these playoff events are held at great courses, it’ll be juicy. So yeah, I’m excited about Medinah.

Ritter: It’s a shot of juice, like those green plant shots they now sell at smoothie shops. The new spot on the schedule isn’t a dramatic change, but it packs a few extra vitamins. The fact that the NFL season hasn’t started yet gives the three events a little boost that I suspect will reveal itself in the TV ratings.

Wood: Man, I just don’t know! Once things get going I think they will, but right now it’s just hard to tell. If we can get a bunched-up leaderboard heading to Atlanta I suspect there will be plenty of juice.

Bamberger: The season feels over to me.

4. In just her first career start out of Japan and on the LPGA, 20-year-old Hinako Shibuno won the Women’s British Open by one over Lizette Salas. Where does this rank among the most stunning pro debuts of all time?

Sens: Impressive. I can’t think of one. Not an exact comparison, since it wasn’t his first start, but John Daly’s win was a stunner of all stunners, not just because it came so out of the blue but because it announced him as a breed apart. You thought, Wow, this dude is playing a different game.

Ritter: I’ve got nothing. A major win in a pro debut? At age 20? The only drawback is that from here there’s nowhere to go but down!

Wood: I’ll give it a rating of 1b. Daly wasn’t even in the field at the beginning of the week when he shocked the world and won the PGA. At least Hinako was in the field.

Bamberger: Crenshaw won his first Tour event, but what Hinako did was at an even higher level. A major!

5. Video surfaced last week of Sergio Garcia gouging a tee box of TPC Southwind after he was frustrated with a tee shot during the WGC-FedEx St. Jude in Memphis. This comes after he tossed his driver at his caddie at The Open, made a careless swipe at a tap-in put that hadn’t been conceded at the WGC-Match Play and reportedly gouged several greens and threw a fit in a bunker at the Saudi International. How should golf fans interpret this latest edition of Sergio behaving badly?

Sens: Remember around the time of his Masters win when Sergio was supposed to be a tempestuous man reborn, with a fresh perspective, on his way toward marriage and fatherhood? I think the lesson has less to do with golf than it does with human nature. People very rarely change.

Zak: Sergio Behaving Badly sounds like a coy title of a forthcoming Netflix doc. This one is merely inches away from him scraping the turf and the video being deleted off the recorder’s phone. So in that I’ll give him a slight break. But like Ron Artest and Grayson Allen and Vontaze Burfict, when you add in the context of history, People Behaving Badly adds up like a resume of acts that we don’t forget.

Ritter: The disembodied Confidential moderator recaps it perfectly. Garcia’s brat act has gotten old, and repeatedly damaging courses mid-competition should have consequences. It’s time for the Tour to put Sergio on ice.

Bamberger: Fans should view it for what it is: bratty behavior, unbecoming of any professional, particularly one who has won the Masters and made tens of millions.

6. A heavily circulated video on social media of a drawn-out putting routine from one of the 17-year-old participants of the U.S. Girls’ Junior Championship last weekend stirred up golf’s ever-popular slow-play debate. Some observers blamed the player, while others pointed the finger at a junior-golf system in this country that doesn’t do enough to emphasis adequate pace of play. Who’s culpable?

Sens: The slow-play problem is way beyond any individual player. It’s institutional, a great disease across all levels of American golf. We’ve talked plenty in this forum about how to make golf more affordable to more people, but we think of affordability in the wrong way. San Francisco is one of the most expensive cities in the world, and you can play some very fun courses in my neck of the woods for $20. Cost is not the biggest issue. The part of the game that most of us can’t afford is time.

Zak: I don’t want to have one video speak this loudly, but SHEESH it was a bad look. Only guessing here, but it felt like a rehearsed system that she had either been taught or not broken from. So in that I’m going to place the blame on her teachers. But, she’s also nearly an adult and knows the difference between a round that takes 3 1/2 hours and one that takes five.

Ritter: In no particular order: her parents, her coaches, her friends, the AJGA, the USGA, the R&A, the climactic scene of Tin Cup, the American public school system, American television, America, J.B. Holmes and, of course, herself.

Wood: Everyone. Professional golf for setting an example, her coaches/sports psychologist, junior golf — which looks suspiciously like professional golf with shorter people — and COLLEGE golf! That guy in front of me at the red light who, when the light turns green, is still too caught up in his cell phone to be bothered to hit the gas. The other person in front of me at the grocery store who has all his items rung up and then it dawns on him that he has to pay, and only then starts to rummage through his wallet. Also that lady I’m behind at Chipotle who, when it’s her turn to order, is surprised to see a 30-foot long menu in front of her and decides now is the time to peruse it and make sure she gets her order exactly right. I gotta be honest, if I were playing someone who did that, at a certain point, I know I would lose it and use some form of expletive and say, “#!#.&&#!@ pick it up, it’s good.” I would love to see a shot clock instituted in the Drive, Chip and Putt. It’s become such a high-profile event it could only help having juniors set the pace. Nobody plays slowly when they start playing golf. Playing slowly is learned behavior.