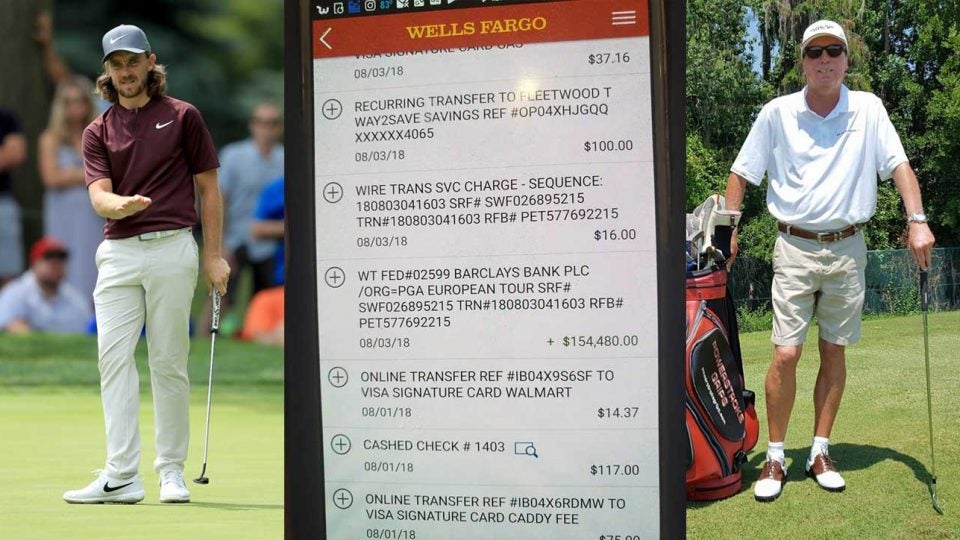 ST. LOUIS — It’s a thought you might have had before: How great would it be to get paid like a PGA Tour player? One Florida man got a taste of that experience last week in the most blunt way imaginable: direct deposit.

“It just said, ‘Wire Transfer,’ so I had no clue what in the world it was,” Thomas told GOLF.com in a phone interview Wednesday.

As a PGA teaching pro and a caddie at Streamsong Resort, he’s not exactly in the business of wiring funds. On Saturday morning, that notification had six figures attached to it. Thomas’s checking account was $154,480 richer.

That’s a stunning sum for most Tom Fleetwoods out there (there are more than you’d think), but it’s no big deal for the 11th-ranked player in the world, better known as Tommy, who tied for 12th at the British Open just 17 days ago.

“I’m a pretty laid-back guy,” Thomas said. “Most people would be jumping up and down. I was like, ‘Meh.’”

The mix-up occurred because of a “clerical” error by the European tour , according to Tommy’s wife and manager, Clare. Via e-mail she explained that the tour had apologized and that “apparently the payments were made manually, not on automated system and there are two TF’s somehow?”

Wednesday was the first she had heard of it, thanks to a tweet shared by Florida PGA Professional, Greg Thorner.

No joke, a friend received Tommy Fleetwood’s Open Championship winnings in his bank account last weekend!! They have the same name and he was a PGA pro but still, how does this happen? Didn’t believe him until I saw it…good thing he is an honest guy! pic.twitter.com/bE534xfYDV

Thomas was already well aware of the shared moniker, of course. Back in 2017, when Tommy bagged two big-time Euro tour events, Thomas received some congratulations on Facebook.

Some of the accounting confusion stemmed from the fact that Thomas was also a pretty decent stick in his day, if not of the world-class variety. “Back in ’89 I played a tournament, I can’t remember if it was the European or Challenge tour,” Thomas said. “It was the Lyon Open in France, but [the European tour] have my information from trying to get on their senior tour.”

Though Thomas was unable to carve out a place with the Staysure Tour, his bank information did, which is why it isn’t all too surprising that, when manually entered, a mistake between two Tom Fleetwoods could be made. An honest mistake, to be sure, but a six-figure mistake nonetheless, and a mistake that was Thomas’s to correct. It’s just that banks aren’t open on Saturday…or Sunday.

Fully intent on rectifying the mistake he labeled “humorous,” Thomas told some friends about it. It got his mother all excited. Over the weekend it was funny for him just to think about, or to glance at his Wells Fargo mobile app. He’d take care of redirecting the funds during the week.

As is the life of a teaching pro and caddie, Thomas was too busy to make a bank trip Monday. Tuesday was his day off and he simply forgot to visit the bank, adding a bit of context to his “meh” comment. Only on Wednesday morning did he receive a reminder via an ominous email from the tour.

“It just said, ‘Wrong deposit, please send it back. Here’s the information to send it back,’” Thomas said. “I emailed them back and I said, ‘Well, I plan on sending it back, but you’ve got to excuse me that I’m not going to send it to this thing you’re sending me randomly in email. But it will be sent back.”

Thomas went to work Wednesday, drove over to his local Wells Fargo on the way home, and asked for the funds to be redirected. Just like that his bank account was back to normal.

“I’m poor again,” he said laughing. His duty was simple, and as of 5 p.m., it was done. It just wasn’t completely settled.

Thorner’s tweet sent a wave of people in Thomas’s direction. “All of a sudden I’m getting all the calls,” he said. “I didn’t want to talk to anybody until l talked with Tommy.”

So Thomas set out on social media. He messaged Tommy’s Facebook page with his contact info. He sent some emails to Clare that went undeliverable. Soon enough, he saw his name on golf websites, and he saw that Tommy had no idea his money went elsewhere. Not until early evening was he finally able to contact Tommy’s team.

How they’ll stay in touch remains to be seen. Other than hoping to correspond with Tommy himself, Thomas was content back at home in Claremont, Fla., Wednesday night. Though there probably won’t be a next time, he’ll be more than ready if there is.

“It’d be nicer if he had won The Open,” Thomas said, making himself laugh. “I’d like to see $1.7 million in my bank account.”