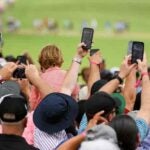 It's Moving Day at Southern Hills.

Welcome to “Seen & Heard at Southern Hills,” a daily compilation of insights and observations from our PGA Championship coverage team that is available exclusively to InsideGOLF members. Check this space daily — or your inbox, where we’ll also be sharing these dispatches to members in newsletter form — for inside scoops on the year’s second major championship.

Their ‘worst’ is still so good

I sat to the right of the 16th green on Friday afternoon as the afternoon wave came through.

“Heads up!” someone yelled. A Titleist 4 settled some 10 yards in front of me.

Viktor Hovland sauntered up a few minutes later to claim his prize: a touchy chip to a short-sided pin. Here was my chance for an up-close look at Hovland’s wedge game, which is statistically among the worst on the PGA Tour.

The chip came out slightly clunky, skirted the right edge of the hole and ran out some eight feet. He cursed under his breath in Norwegian.

Across the green, tournament leader Will Zalatoris lagged a 30-footer up to three feet. If you spend any time watching Zalatoris hit short putts, you know it’s not exactly his comfort zone.

Here it was, all happening at once: I was witnessing two of golf’s fresh stars confront their greatest weaknesses. It occurred to me that Hovland would fail to get up and down and Zalatoris would three-putt and that the whole scene would sum up why neither of them would win this golf tournament.

Instead, Hovland poured in his par putt. Zalatoris casually stroked his shortie to the same destination. They each walked off the 521-yard behemoth with pars. Neither looked particularly moved by this outcome. It was a reminder that these guys are stars for a reason and that even their weaknesses aren’t very weak at all. In other words, I wouldn’t challenge Hovland to a chipping contest or Zalatoris to a putting contest anytime soon.

In the eye of the Tiger storm

It’s not easy playing in Tiger Woods’ group, as Rory McIlroy and Jordan Spieth did in the first two rounds this week. But it’s even harder playing in the group ahead of him.

That was the commotion-laden task that fell to Will Zalatoris, Cameron Smith and Viktor Hovland at Southern Hills on Thursday and Friday.

Like the gusting wind, their positioning was a nuisance that came and went throughout the day. Not helping matters: the close proximity of Southern Hills’ greens and tee boxes. On Friday evening, when the Oklahoma crowd was at its rowdiest, the challenge became particularly acute.

When Tiger birdied 13, a mighty roar followed. Over at the par-3 14th green, Cameron Smith was standing over his own birdie putt. He missed.

On the 17th tee, Zalatoris waited five minutes, club in hand, for Tiger to approach the green on the perpendicular 16th hole. The delay led to the 36-hole leader’s worst shot of the day that almost slipped into the creek down the right side of the hole.

On the 18th tee, the group waited again for Tiger and Co. to hit their drives. After they did, Woods, McIlroy and Spieth stopped before proceeding down the fairway. Tiger gave Hovland a subtle wave-through, assuring them no roar was coming.

That Zalatoris, Smith and Hovland come into the weekend first, T10, and T25, respectively, is a testament to their ability, and perhaps an insight into what’s to come. If they can handle the unpredictable stop-start rhythm of playing in Tiger’s wake, the weekend pressure of a major championship may be smooth sailing.

If Brooks Koepka does one thing as well as playing world-class golf, it’s giving an entertaining press conference.

That is, if you enjoy a bit of vinegar. And you most certainly do not want to be caught in Koepka’s crosshairs.

With that, we take you to the four-time major winner’s presser on Friday. Koepka was seemingly in good spirits after a three-under 67 moved him back under the cutline at the PGA Championship, following a first-round 75 at Southern Hills. His first four answers were nothing out of the ordinary.

Then came this exchange with a reporter:

(We’ll interject here to say that the winds in Tulsa were gusting upward of 40 mph on Friday — and, on Thursday, about half that.)

Question: Was it windier today or yesterday?

Koepka: What do you think?

Question: I don’t know, my hair has been blowing either day.

OK then! While Koepka’s been a bit out of form of late — he’s missed the cut in four of his nine events this year — he hasn’t lost his edge at the mic.