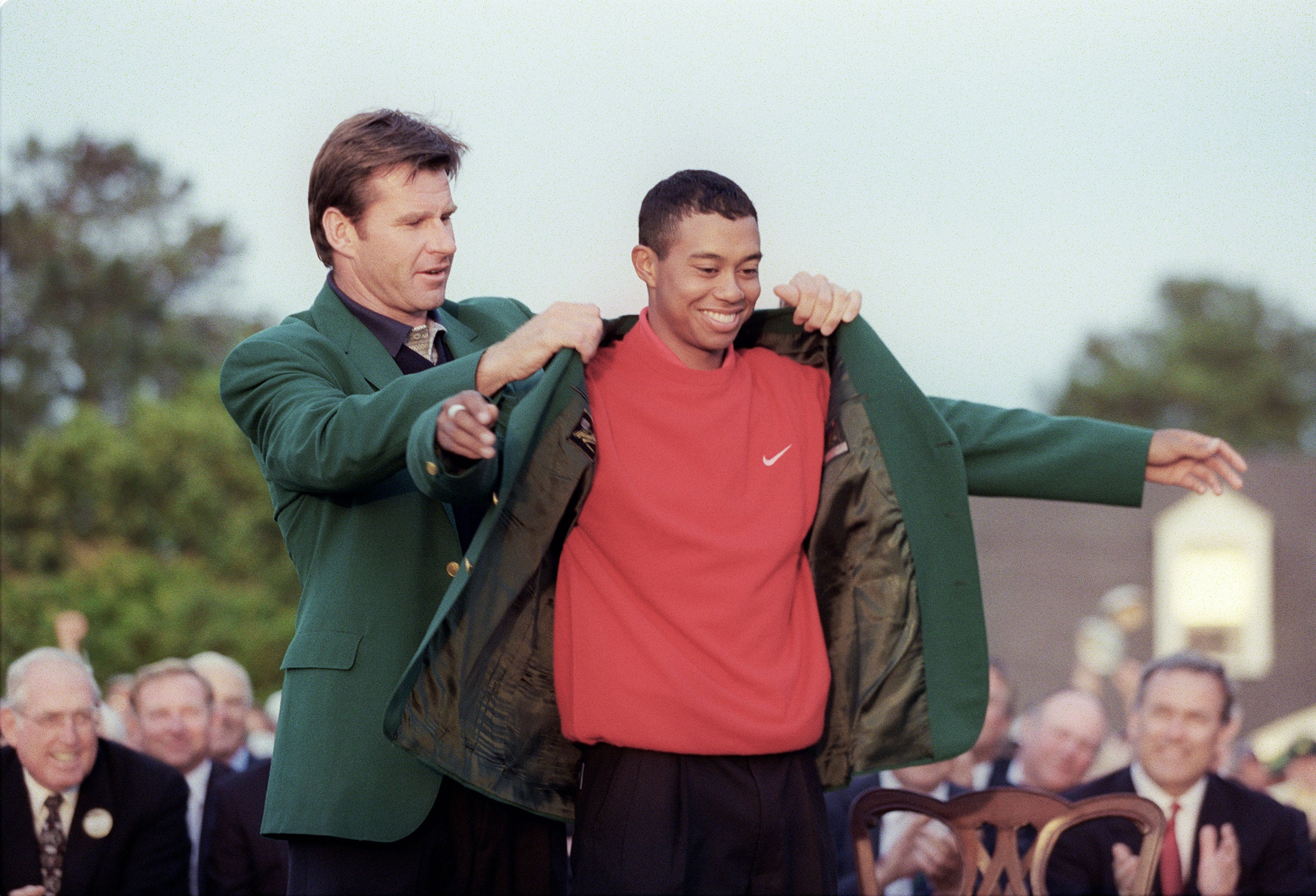 Over 40 days, GOLF.com rolled out Tiger Woods’ 40 biggest moments. Our ranking started on Nov. 21 and culminates today with Tiger’s 40th birthday. Click here to learn more about our list.

The 1997 Masters was years in the making. Tiger Woods had won the USGA junior national title in 1991, ’92 and ’93. He won the U.S. amateur in ’94, ’95 and ’96. In ’97, at Augusta, he would be playing in his first major as a professional. He was already a proven winner on Tour. His amateur career in the four majors, amassed when he was still a Stanford student, no longer meant anything.

The ’95 Masters was an all-timer, Ben Crenshaw winning days after burying his teacher, Harvey Penick. The iconic photographs of Crenshaw being consoled by his tall, slender caddie, Carl Jackson, moved millions of people, way beyond the borders of golf. In ’96, Greg Norman had a six-shot lead going into Masters Sunday, and lost to his playing partner, Nick Faldo, by five. It was like watching a funeral, gripping but depressing. The hug the two men shared, despite nothing but a vague animosity between them, again brought millions to the game who otherwise would not have been paying attention. And the kid went out in 40. You wondered if he would make the cut.

You know what happened next. He played the back nine in 30 shots, four under par. Yes, we know the back-nine at Augusta National is a par-36. On the card. But Woods, playing a short-shafted steel driver with a little tiny head, was hitting the drop-dead beautiful baby-draw tee shots that were in the air forever. He played 13 and 15, the two iconic back-nine three-shotters, not as par-5s, but as short par-4s. After his opening 70 there were only three players ahead of him.

Unfairly, we—millions of us, who love golf but were ashamed of its elitist reputation—assigned a job to Woods for which he never volunteered. This bright (Stanford), telegenic (what a smile!) working-class (son of an Army officer) black (Cablinasian, if you must) kid (all of 21) was going to take the game, our game, places it had never been before. All he had to do was become the youngest person ever to win the Masters.

By Saturday night, that was a foregone conclusion. Ben Crenshaw—a drinker, a smoker, a Texan, an artist, as old-school as a June day is long—stood with the writers (writers!) and talked about a new day coming in. The Tiger Era! He was not forlorn. Not at all. He had had his day in the sun, no sunblock, but now Michael Jordan was moving in and the game would no longer need, and maybe even have room for, Pistol Pete Maravich. This is not sportswriter hyperbole. No, sir. Colin Montgomerie, a genius (in case you didn’t know), was spelling it all out on that Saturday night. “All I have to say is one brief comment,” Montgomerie said. He had played the third round with Woods. “There is no chance. We’re all human beings here. There’s no chance humanly possible that Tiger is going to lose this tournament. No way.” Why, the great Scot was asked. The Norman collapse was only a year old. “This is very different,” Montgomerie said. “Faldo’s not lying second, for a start. And Greg Norman’s not Tiger Woods.”

Greg Norman was a borderline transformational figure in the game. The face of golf, in the years after World War II, went from Ben Hogan to Arnold Palmer to Jack Nicklaus to Tom Watson to Greg Norman. But Montgomerie was saying what we were all about to learn: Norman’s impact was nothing compared to what Tiger Woods was about to do.

Right about then, anything and everything seemed possible. Maybe it was too good to be true. Maybe we were expecting too much. But, man alive was it exciting. He was so skinny, and his sweater, with the arms pushed up, was so red.

See all the other moments in our in our TIGER AT 40 countdown.