About that altitude: Tiger Woods is hitting 180-yard wedges in Mexico

Tiger Woods is making his competitive Mexican debut this week at Chapultepec Golf Club. But more than adjusting to the culture, that means adjusting to the altitude. During his pre-tournament press conference Wednesday, Woods acknowledged that figuring out yardages at nearly 8,000 feet has been the biggest challenge.

“I need to figure out how far this ball is going,” Woods said. “It’s a challenge. I hit a couple shots with wedge on the course yesterday that flew 180. On Sunday [at Riviera] I hit a five-iron from 171.”

Plenty is different at WGC-Mexico than it was at Riviera, of course. Temperatures should approach 80, a far cry from the 40s and 50s in which Woods battled in L.A. Woods will get to sleep in, too — he plays at 2:03 p.m. (ET) Thursday and 12:51 p.m. Friday — which stands in stark contrast to his 1:30 a.m. wakeup on Sunday. And instead of playing tournament host at a familiar course as he did at the Genesis — where he’s played since 1992 — Woods will face a foreign test this week.

“It was a lot tighter than I thought, the ball was traveling a long way, and the numbers on the range were a bit surprising,” he said. He’s been tinkering with his equipment, adding a quarter-degree of loft to his 3-wood to keep the ball in the air and experimenting with hitting two-iron, and getting used to working the ball at this elevation, where he said the ball flies forever but “just doesn’t curve.”

“It’s hard to get myself to hit certain shots, ’cause I just don’t see the golf ball going that far,” he said. 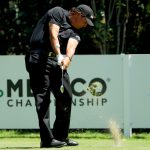 But Woods gamely took questions from the local media, expressing his eagerness to be in Mexico, playing in front of fans who’d likely never seen him before. He said he hoped that kids who turned out to watch didn’t just get excited about the game, but got access to golf courses, too. “The sustainability of it, it gets a little tough at times,” he said.

Woods also praised the game of playing partner Abe Ancer, the world’s top-ranked Mexican golfer, who he expects will win on Tour before long. Ancer, he said, will face extra pressure this week. Woods will be preoccupied with facing extra math. But the new setting itself is nothing new for Woods, who has won this event seven times at six courses in four countries.

“I’ve had some success in World Golf Championships no matter where they’re played,” he pointed out with a smile.