Tiger turns eye toward offseason: ‘I need to start really lifting and getting after it’

Tiger Woods has two tournaments left in his season: the Tour Championship and the Ryder Cup. After that? Woods already has a plan in mind. And it features the gym.

“I’m going to take a long break after the Ryder Cup and we’re going to evaluate things,” he said after finishing T6 at the BMW Championship Monday. “But more importantly, I need to start really lifting and getting after it and getting stronger in certain areas, because playing every single week seems like every single day is maintenance at this point, a war of attrition.” 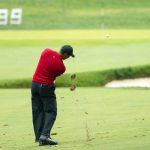 Woods was ahead of his time when it came to emphasizing fitness and strength. This February, he recounted his legendary workout routines of old. “Well, I used to get up in the morning, run four miles,” Woods said at the Valspar. “Then I’d go to the gym, do my lift. Then I’d hit balls for two to three hours. I’d go play, come back, work on my short game. I’d go run another four more miles, and then if anyone wanted to play basketball or tennis, I would go play basketball or tennis. That was a daily routine. I’m not doing any of that now.”

But he’s hardly neglected the weight room this year. Take Sunday, for instance, a supposed off-day when the BMW’s fourth round was postponed. How did Woods spend his day? “I lifted twice and I got some treatment,” he said. “And I watched a ton of football.”

It sounds like that routine will continue through the offseason. “What you do in the off-season is what allows you to maintain it through the year especially on the backside of the year and I really didn’t train for all this,” Woods said. “Because I didn’t know how much I was going to be playing. I was just trying to play. So, next year I have a better understanding of what I need to do and this off-season will be very different than it was last year.”