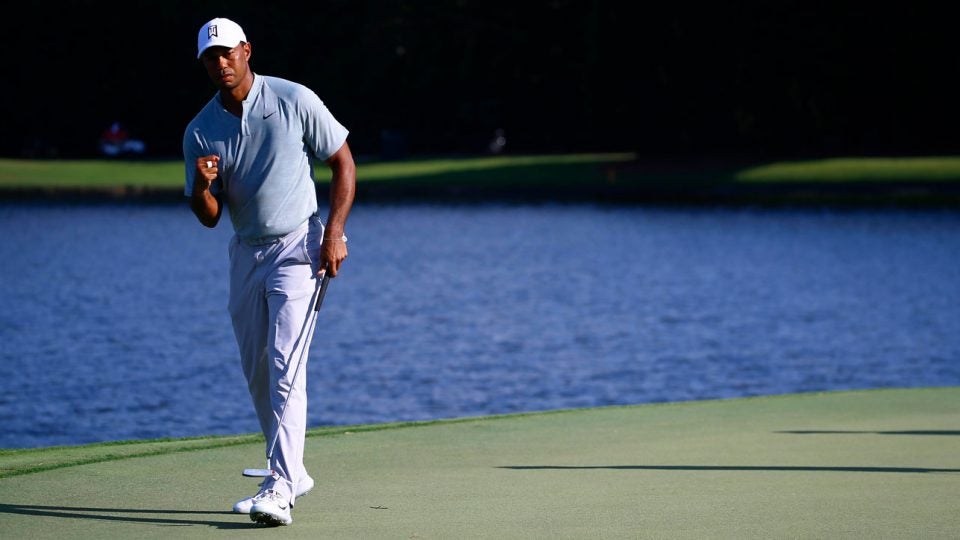 At the halfway mark, Tiger Woods is tied for the Tour Championship lead. The 14-time major champ entered Friday’s second round at East Lake tied for the lead. At one point, he fell two shots behind. Several holes later, he was two shots ahead. In the end he finished the day where he started: tied for the lead with one other talented player after a second-round 68.

Teeing off in the final group with co-leader Rickie Fowler, Woods jumpstarted his Friday with a birdie at the second hole. He hit a low draw that landed just over the pin at the par 3 and poured in a 20-footer to grab the solo lead.

He wouldn’t hold the lead alone for long. His round stalled out with a string of pars as players up ahead poured in birdies. At one point Jon Rahm seized the lead, and Rickie Fowler, Rory McIlroy and Justin Rose stayed in the mix as well. After missing a four-footer for par at the par-3 9th, Woods found himself  two shots back.

But just as he had during his first round, Woods seized the back nine. After neat par saves at 10 and 11, Woods stuck his approach at No. 12 inside five feet. He converted that for birdie, which combined with a Fowler bogey to make him the solo leader once again.

The solo leader at @PlayoffFinale?

Justin Rose surged up ahead with a string of birdies and seized the lead for himself. But then Woods took it back. He made a slippery curler at 14, then poured in a 25-footer at 15, the treacherous par 3.

For a brief moment, he held a two-shot lead. But that was fleeting. Woods found the rough at No. 16 and played his approach into the face of a fairway bunker well short of the green, where it plugged. A double bogey left him in a share of the lead, back at six under.

Woods falls into a co-lead. pic.twitter.com/67IC8soOJ3

Rose birdied 18 to post seven under and temporarily grab the lead alone again. But Woods smoked his tee shot down the center and hit a long iron from 225 yards to the front edge of the green, 30 feet from the hole. His eagle putt just missed, but he tapped in for birdie and a two-under 68.

Woods finished the day hitting seven fairways and 11 greens in the five-birdie effort. He enters the weekend seeking to cement his comeback with his first win in more than five years. Rose is hoping to stand in his way and claim the $10 million FedEx Cup prize in the process. A host of others hope to spoil the party, too. Now to the weekend.