PEBBLE BEACH, Calif. — If you were following the high-octane group of Justin Rose, Tiger Woods and Jordan Spieth in the second round of the 119th U.S. Open, you would not have mistaken the scene for, say, the Hero World Challenge. The crowds were big and vocal, scoring didn’t come easy and the tension was thicker than the greenside rough. Rose barked at camera-snapping fans; Woods dropped an f-bomb after blocking an approach shot into a bunker; and whatever weirdness was at work between Spieth and his caddie, Michael Greller, in the first round hadn’t appeared to have dissipated.

Spieth didn’t admonish Greller for poor club choices Friday, as he had done a day earlier, but there was a moment on their sixth hole of the day — the par-4 15th — when Spieth, deciding between clubs for his approach to the green, said to Greller, “This won’t go over no matter what, right?” It felt like another scolding. The fans also seized on the palpable drama. “You’re a good caddie!” one spectator yelled near the 8th green, prompting another fan to chime in with, “We love you, Michael!” Greller remained his typical stoic self throughout the day, his eyes hidden beneath dark wraparound sunglasses.

The strife, or perceived strife, didn’t impact Spieth’s ability to score. He birdied three of his four holes (10, 11 and 13), then added four more birdies against five bogies to post a 69. At one-under for the tournament, eight off the lead, he’s still in the mix, but staring up at Rose (seven under) and Gary Woodland, who after the low score of the day, a 65, is the outright leader at nine under. After Rose’s opening six-under 65, he cooled off Friday, but still played steadily on his way to a one-under 70. Woods played like Nick Faldo for 16 holes (15 pars, one birdie) before closing bogey-bogey for a 72. He’s even for the week, which is excellent at most Opens but just better than average at this one. (So far.) 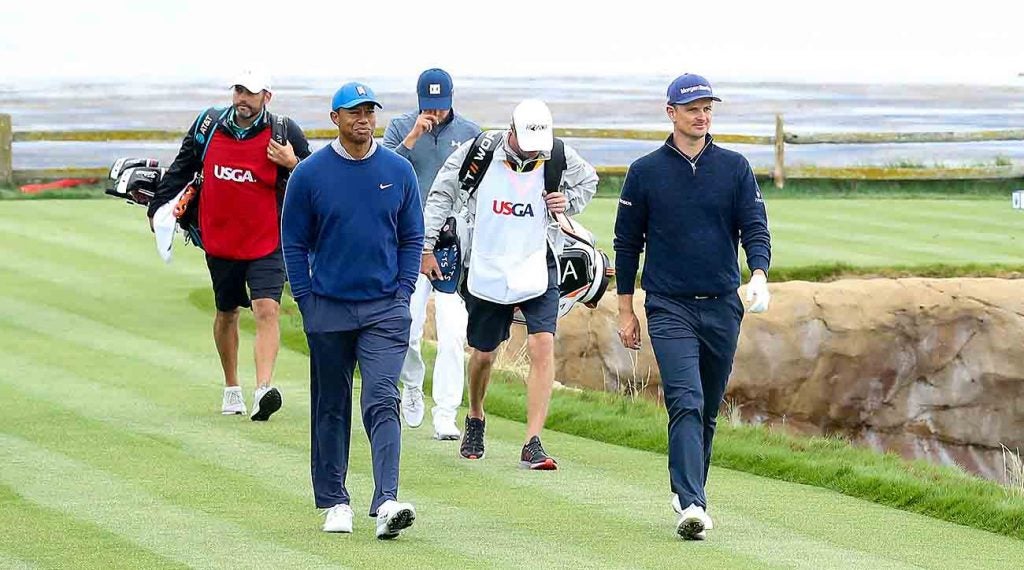 Each member of the morning's marquee group -- Tiger Woods, Justin Rose and Jordan Spieth -- provided excitement in his own way.
Getty Images

The weirdest moment of the round featured — who else? — Spieth and Greller. When Spieth tried to rip his second shot out of fairway bunker at the par-5 2nd, his ball ricocheted off a rake and buried in a gnarly lie in the long grass on the edge of the bunker. All Spieth could do from there was chunk a wedge back into the fairway, which led to a bogey 6. The peanut gallery on social media questioned whether Greller should have noticed the rake, but after the round Spieth was quick to shoulder the blame, or at least share it. “That’s on me,” he said. “I just got to look at all options ahead of me. And if there’s rakes in front of the bunker, typically we pull them out. But when I was in it, I couldn’t see it.”

Two holes later, on the tee at the short par-4 4th, another oddity. Spieth was up first, coming off a birdie at 3, and in an attempt to get someone’s attention down the fairway he put his fingers to his mouth and let out a shrill whistle. At that moment, Rafa Cabrera-Bello was teeing off on 17, which shares a tee box with No. 4. Tiger’s caddie, Joe LaCava, tapped Spieth on the shoulder to alert him of his misstep. Next up was Rose, who blocked his tee shot off the cliff that lines the hole. He glared at the grandstand to his left and said, “I heard that camera, guys. Not cool.”

Tiger had his own frustrations. When he arrived on the green at the par-5 6th, he and LaCava conferred on the 11-footer Woods had for birdie. Woods hit the line they had agreed upon but the putt missed an inch high. “It bounced!” Woods barked. When asked about the greens after the round, Woods said they were faster than Thursday but “still a little slow and bumpy.” After bogeying the 8th, Woods deposited his drive into a fairway bunker on the par-4 9th. The ensuing sand shot came out fat and short. When Woods stepped out of the bunker, he drew back his iron and took out his rage on his Monster-branded golf bag. After his 5-5 finish, Woods told reporters what they already knew, “I’m a little hot right now.”

Woods is still in the hunt, nine back of Woodland, but he knows too well that his ability to mount a charge over the next 36 holes will hinge in part on how the blue coats alter the course setup. “They got it right where they want it,” Woods said. “It’s just a matter of how much will it dry out from morning to afternoon. The fairways were a bit slow and soft. I don’t think they put mowers on them this morning. And the short areas, the run-ups, man, they’re firm. So if they get the greens anywhere like that, it will be a hell of a test.”

Woods was talking to the press near the scorer’s trailer, a short walk from the 9th green. Minutes earlier Greller had made this same walk, with Spieth’s bag slung over his shoulder. He wore the look of a guy who could use a hug, or at least a stiff drink. A familiar face approached Greller from the opposite direction: Zach Johnson’s caddie, Brett Waldman. Waldman extended his arm, gave Greller a fist-bump and said, “Love you.”

“What’s that?” Greller said, looking back at him.

Spieth met the press immediately after Woods and was asked about his relationship with Greller, specifically how much of Spieth’s success is tied to having a caddie who he can talk with freely.

“I think our communication has been very successful over the last six, seven years,” Spieth said. “It’s kind of all the stuff I used to hold in my head before I’m able to kind of just fall out now. It’s very important, especially when you’re trying to hit small greens here at Pebble Beach, it’s nice to have somebody looking out for you.”

Greller was sitting on Spieth’s bag, head in his phone, just on the other side of the cluster of reporters. It was hard to tell if he could hear his boss’s kind words. Before Spieth finished fielding questions, Greller rose, picked up his bag and headed for the shuttle bus stop. A reporter asked to walk with him. “I’m good, thanks,” he said.

The caddie continued down the path by himself.