Playing with the lead: 5 things to watch for in Tiger Woods’s second round at the Tour Championship

All year, Tiger Woods has struggled to get off to hot starts in big events. Not so at the season-ending Tour Championship, where Woods punctuated a fine opening 65 at East Lake with an 18th-hole eagle that sent him soaring to a share of the lead. Now, to paraphrase Napolean Dynamite, things could be getting pretty serious. Here are five things to watch for from Woods, who goes off at 2 p.m. Friday.

After exploring TaylorMade’s options, Woods’s faithful Scotty Cameron made its return at the BMW Championship, and remains in the bag. He acquitted himself well on the greens Thursday, gaining 1.2 strokes on the field. Once he shook off an opening three-putt, it was gravy.

“Once I figured out the pace of these things, it was all good,” he said. There was also this particularly memorable roll:

It used to be that the back nine at East Lake was the brutal test. Now that the nines have flipped (a change that Woods says still confuses him) it is the open, rather than the close, that makes things tough for the field. “It’s probably one of the tougher starts that we have,” he said.

The front nine is playing about a stroke-and-a-half over par. The back nine is playing a full shot under par. Neither Woods nor his competition needs to get off to a hot start to stay in good position; scoring will come with patience on the back nine. 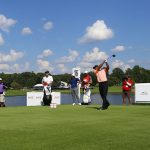 You may also like 2018 Tour Championship: Second round tee times, pairings for Friday at East Lake

To hear Woods tell it, the new shaft in his driver is delivering results when it comes to accuracy and playability. Here’s what he said after the first round.

Relatable, as always. But it speaks to a crucial factor in Woods’s success. He found 10 of 14 fairways Thursday, which was bettered by just two players in the field. His overall driving distance, meanwhile, ranked in the middle of the pack. If he keeps it in the middle the rest of the week, 310 carry or not, he’ll have a good chance to win.

Keep an eye on Woods’s demeanor Friday. He has already acknowledged that this year has already been a success, win or not. But we’ve seen him on the course, stalking birdie putts in contention. Because the Tour Championship re-pairs after every round, not just the weekend, we’ll see him in the final group on Friday with Rickie Fowler. Will it be a chummy, relaxed pairing of two neighbors and Ryder Cup teammates, chopping it up in a mini-field event? Or will Woods be fully locked in, hoping for a low round and destruction for all others?

It’s a long shot, but Woods could still win the FedEx Cup (we laid out the exact scenarios here). But he needs some help. If you find yourself rooting for Woods to pad that bank account with the fresh $10 million that comes with lifting this trophy, a good place to start is in rooting against Justin Rose, who sits a shot back and began the week in 2nd place. You’d also better root for Woods’s buddy Bryson DeChambeau to keep struggling, and for low finishes from Dustin Johnson, Tony Finau and Justin Thomas.

We just don’t recommend doing the math yourself.