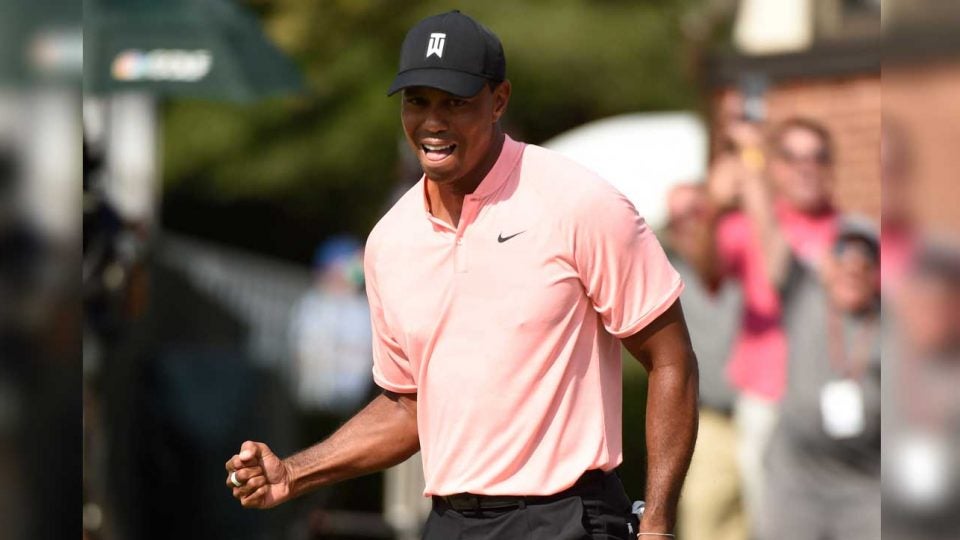 ATLANTA — In the opening remarks to his Tour Championship press conference on the eve of the tournament, Tiger Woods stirred memories of the Tiger Woods we know and love.

“Now I want to get the W and then head into next week in the Ryder Cup,” he said.

The ‘W’ would be career victory No. 80 on the PGA Tour. All year long, Woods has been consistent in his efforts to temper expectations and downplay the importance of winning. First, he had to see if his fragile back would hold up. Once he passed that test, he had to find a swing that worked, and then as he surged into contention at tournaments as early as the Florida Swing in March, He’d later hold the lead on the back-nine Sunday at the British Open in July. Despite the relative success, Woods refrained from jumping ahead to think about what it would be like to hold a trophy for the first time in more than five years.

That’s why it was so refreshing to hear Woods give voice to his goal once more. He’s done all the work to be here and all that is missing this season is to hoist hardware like he did in the good ol’ days. What an exclamation it would be. Through 18 holes at East Lake, Woods looks poised to be in the trophy hunt. He poured in a 28-foot eagle putt at the last to shoot a 5-under 65 and share the first-round lead with Rickie Fowler.

What a feeling it must be after barely being able to hit 60-yard shots at this time a year ago…and now to be mashing a drive 320 yards on the 18th hole.

Woods is puff-out-your-chest proud that he earned his way to the Tour Championship for the first time since 2013. As he noted, “there are no exemptions” handed out to this event and called it “a pretty good accomplishment.” He even went so far as to say that he’s already chalked this year up as a success, win or lose this week. Just being healthy enough to compete in 18 tournaments — his most since 2013 — is a victory in itself.

Fowler, who played a bunch of golf at home at the Medalist Golf Club with Woods last fall as Woods embarked on his latest comeback, recalled a pivotal moment when he realized that Woods was on the rebound.

“We played 18 and I was going to go home and work out, and he went out to go play another nine,” Fowler said. “It’s been a while since we’ve been able to see him just go play for fun. He wanted to keep playing, so he kept playing.”

On Thursday, Woods started slowly, making his lone bogey of the round when he took three putts from 24 feet. It looked as if Woods just blew on his downhill birdie putt, but it still raced 6 feet by. He lipped out the comebacker. After the round, he expressed surprise at the speed of the greens. He continued to have good looks at birdie during the early holes, leading to this thought: Could Woods be hot under the collar if he was wearing a collar-less shirt?

His old faithful Scotty Cameron putter, which returned to the bag at the BMW Championship, came to life as he sank a 26-foot uphill birdie putt at the fifth and a 15-footer at the sixth. After fanning his tee shot to the right at the seventh, Woods painted a picture the way his dad, Earl, taught him and gripped down on an iron and punched a low-running shot from the pine straw on to the green to rousing applause. He rescued par en route to shooting 1-under 34 on his first nine.

Woods showed great patience in accepting that the birdies would come. They did. He dialed in a wedge to 4 feet at the 12th and walked in a 7-foot birdie putt at 14. He kept hitting fairways (10/14) and greens (14/18), another reason why Woods would later rate his 65 at East Lake as better than his 62 in the opening round of the BMW Championship just weeks ago.

On the closing hole at East Lake, Woods blasted his drive 320 yards down the left side of the par 5. He benefited from a hop into the short stuff, which left him 254 yards to get home in two, and took aim with a 5-wood.

“I knew it was good and I started walking after it,” Woods said.

When told that his shot checked up when it hit the green, Woods smiled and said, “Yeah, that was a good one, thank you.”

So was the putt, which was a goose-bumps moment. Eagle at the last to claim a share of the overnight lead? The fans surrounding the green missed such moments. They roared when it dropped.

“It took forever for that putt to start breaking, grain coming down off the left,” Woods said. “But once it snagged it, it was going straight right.”

It seems like forever since Woods’s game has looked this complete. Even his old golf coach, Butch Harmon, expects him to win any day now.

“He could have easily won two majors this year. If he could have driven the ball just a little better he would have had a good chance at winning two majors,” Harmon said on Hank Haney’s Sirius/XM radio show on Wednesday. “I said I didn’t think he’d ever possibly play again, and then I said I doubt whether he’d ever win a tournament again. He’s going to win a tournament again and he’s going to win a major again. He’s going to prove all of us wrong. … I think the sky’s the limit again for Tiger Woods which is pretty cool when you consider he’s gonna be 43 years old in December.”

What would that elusive first victory since the 2013 Bridgestone Invitational mean to Woods?

“It would just enhance the year,” he said.

There it is again: downplaying the importance of victory.

Experience tells us you can’t take everything Woods says at face value. He wants the W. He knows it coming, and it could be as soon as Sunday.