What Tiger Woods revealed in his first-ever Butler Cabin interview 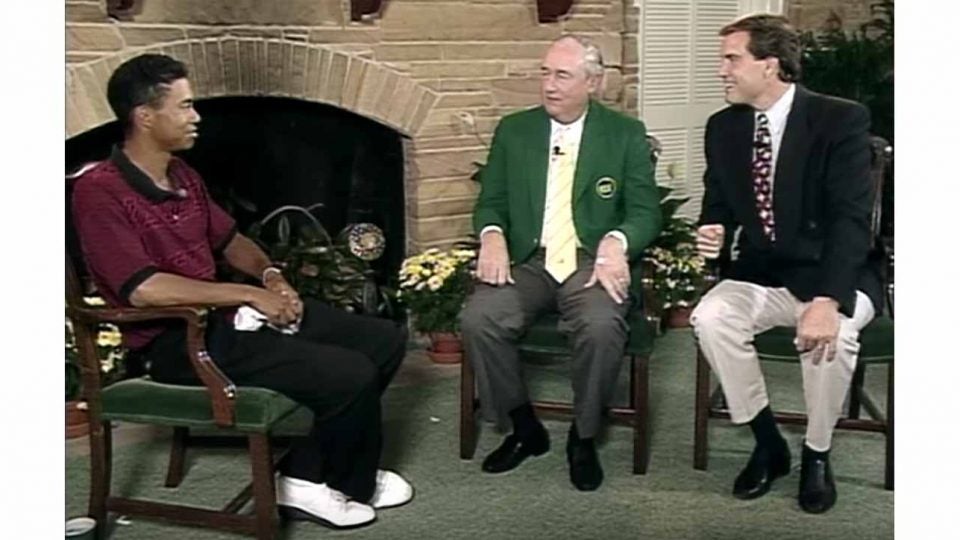 Welcome back to the Tiger Woods YouTube Project, where it’s taken us what feels like ages (at least a week) to make it to the hallowed grounds of Augusta National. But folks, we did it. We’ve arrived at 1995. It’s Woods’ first major championship. His first made cut, for that matter. And his first sitdown with Jim Nantz in Butler Cabin. Let’s get to it!

Ben Crenshaw won the 1995 Masters; he led the sports pages on Monday morning. But the secondary story was the promise of a 19-year-old who’d finished 19 shots back. Jack Nicklaus said Woods had quite a week, given the media pressure. Woods thought so, too. And because he was the only amateur to make the cut, he got a sit-down interview with Jim Nantz and Augusta National Vice Chairman Joe Ford in Butler Cabin. Here’s what that looked like.

I should note that this is just a clipped version; there’s an extended edition in the 1995 Masters broadcast, which you can find here — it’s at the 2:37:00 mark. Anyway, watch the video above and then I’ll tell you seven things I learned from Woods’ Masters debut.

1. Tiger only had enough pull for the vice chairman?!

What, we couldn’t even get the chairman on the horn? Jack Stephens was the head honcho at Augusta from 1991-98, but in Tiger’s first trip to Butler Cabin we’ve got vice chairman Joe Ford conducting the interview. It crosses the mind that Stephens may have been doing something more important, until you consider that nothing could be more important than interviewing low amateur Tiger Woods.

2. His career turned out better than some others.

You might think that Tiger’s cohort of fellow amateurs also went on to illustrious pro careers. Trip Kuehne stayed an am, but you at least may have heard of him. But Lee S. James? Guy Yamamoto? Tim Jackson? Not so much.

3. He told us he was going all four years!

Did Tiger really think at this point — heck, at any point — that he was going to go all four years at Stanford? Because that’s what he says here, very clearly. “I’m gonna go all four. There’s no hurry to get out here,” he says, and I’m inclined to agree with him. Attending Stanford and jetting out to major championships now and again seems like a pretty good life, even if you have to fly back in time for Monday morning history class.

“I’m only 19 years old and I feel it’s right for me to live it up a little bit. You’re only young once and college is such a great atmosphere and I really love it there.” Put it on the brochure! But he’d attend his last Stanford class just a year later — and you know the rest. 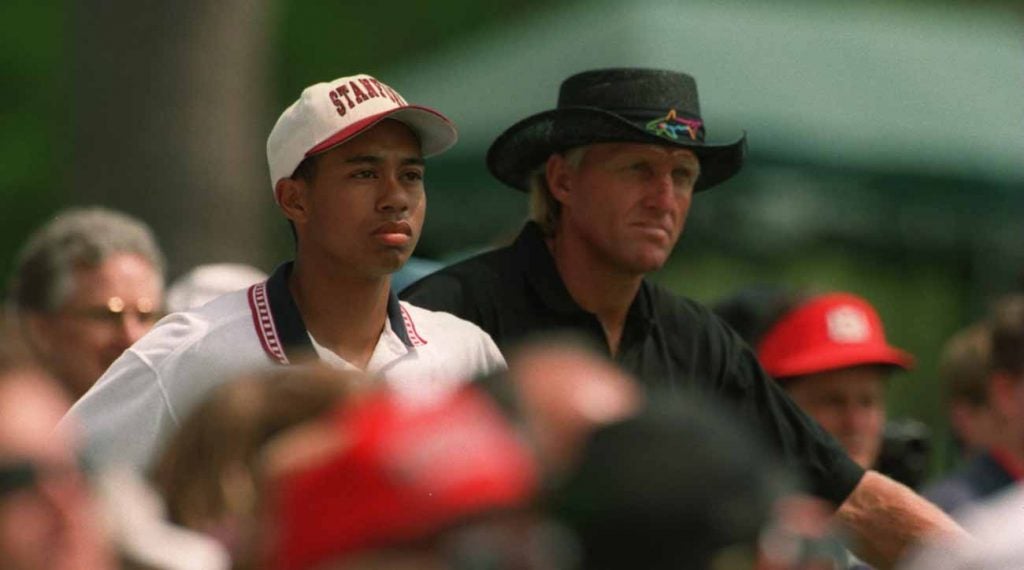 Tiger Woods and Greg Norman during a practice round at the 1995 Masters.
Getty Images

4. He showed plenty of respect for the old guard.

Woods was plenty deferential to the vets on Tour. Some people are left with the impression from the following year’s Curtis Strange interview (more on that later) that Woods doesn’t hold the Tour’s upper class in much esteem. But here, he rattles off the names of legends he shared practice rounds with: Faldo. Price. Norman. Floyd. Couples. Plus, he teed it up in the par-3 competition with Gary Player. What’s crazy is that Woods and Couples would still be playing practice rounds together 25 years later — and Couples would still be challenging cut lines.

“I really found out how good these guys really are,” he said, leaving out the obvious part: Tiger would soon be better. Smart kid, leaving that out.

“It has been very memorable because I played extremely well,” he told the AP after his round. Coming out of this tournament, I feel very confident and very positive with the way I played.

(RELATED: Give a listen to the podcast reliving the ’95 Masters below!)

6. He loved his Crow’s Nest lodging.

As the reigning U.S. Amateur champ, Woods set up shop for the week in the Crow’s Nest above the clubhouse. “I had a lot of fun up there,” he told reporters afterwards. “I always get lost when I go in there. It took me. A few days to get acclimated. There are so many doors that lead…well, I don’t know where they lead. He added that he walked through the Champions locker room. “At night, there’s no one in it, so you can walk through.”

His words, not mine! Here’s the letter Woods left as a thank you to tournament staff:

“Your tournament will always hold a special spot in my heart as the place where I made my first PGA cut, and at a major yet! It is here than I left my youth behind and became a man.”