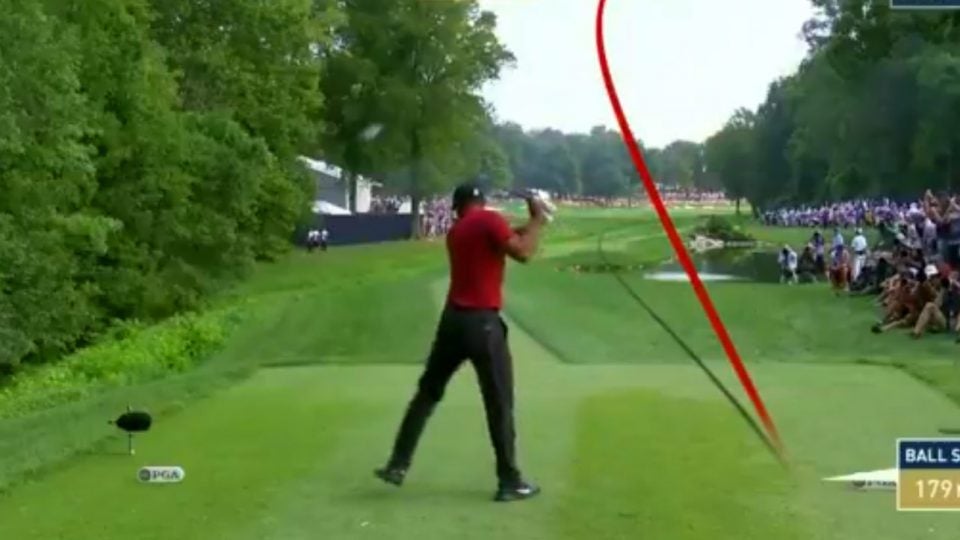 Tiger Woods thrilled massive crowds at Bellerive and millions of TV spectators Sunday with an impressive performance in the final round of the PGA Championship.

But one drive late in the round derailed what could have been a historic 15th major championship victory.

When Woods arrived at 17 on Sunday, he had already made three birdies on the back nine to get within one shot of leaders Brooks Koepka and Adam Scott. Since those two players were playing behind him, Woods needed an eagle at the par-5 to have a real shot at the Wanamaker Trophy.

Early in the round he was wild off the tee, missing all seven fairways on the front nine. But he had hit a few perfect drives on the back. Unfortunately for Woods, this drive sailed way right, nearly landing in a creek that runs the length of the 17th hole.

In fact, Tiger’s ball had come to rest in a patch of dirt and rough to the right of the creek, and required a punch-out.

He failed to reach the green with his third shot, ending up in a greenside bunker, and ending his chances at his fifth-career PGA Championship victory. Koepka would make back-to-back birdies soon thereafter.

You can see the the pro-tracer from Tiger’s drive (and his ensuing club slam) below.