What Tiger Woods, Ben Hogan and Shivas Irons have in common 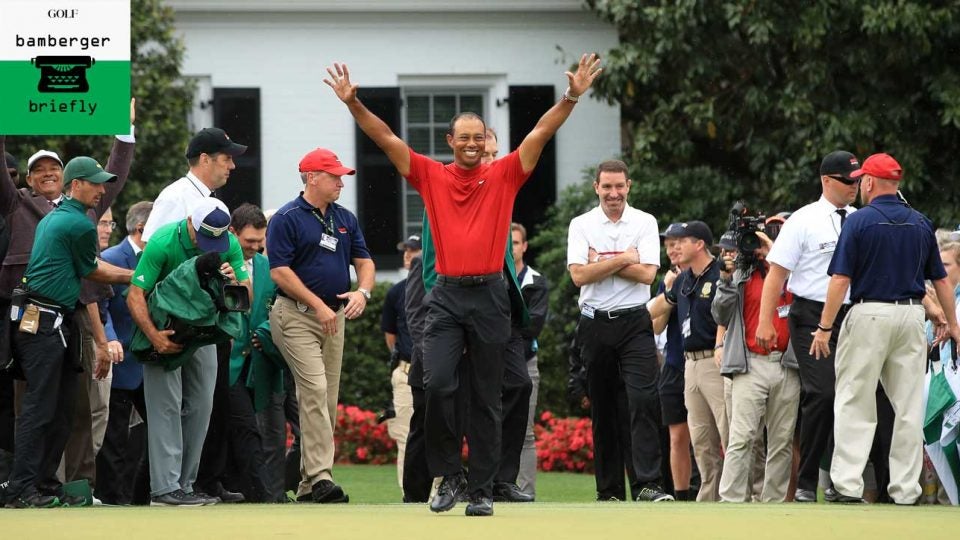 Ed. note: This week, in honor of Tiger’s now-postponed defense of his 2019 Masters title, Bamberger, Briefly will comprise what are, at least in spirit, outtakes from his new book, The Second Life of Tiger Woods. For much more on the book, listen to Bamberger on this episode of The Drop Zone.

Before you get to the first page of the aforementioned book, you hear from the Shivas Irons his own self, the protagonist of writer-golfer-philosopher Michael Murphy’s cult classic, Golf in the Kingdom:

“I’ll be damned,” he said, his eyes more cross-eyed than ever. “‘Tis the first time I e’er shot a hole-in-one on the 13th.” He looked at the shillelagh, and kissed its mean-looking burl. “Ye saved my life, ol’ spoon,” he said with enormous relief. “Thank ye kindly.”

It is not wise, broadly speaking, to have the best sentences in your book come from some other source, and in its epigraph, but I could not resist. Shivas Irons, with stunning brevity, summed up the 85,000 words that follow. It wasn’t just his old spoon that saved Shivas’ life. (The spoon was a fairway wood, back in the day.) It was the game itself.

And so it was and is for Tiger Woods. Golf shaped him, defined him, made him, cost him and now has saved him. He was on the side of the road, on that Memorial Day night in 2017, lucky to be alive. After that, Woods took stock of himself, his external and internal self, in ways he never had before. That’s my take on what he did between Memorial Day 2017 and Masters Sunday 2019. (I’m not saying my take is correct.) Golf gave Tiger a path to define his days, to mark his improvement (in every sense of the word), to practice gratitude. It’s been some run. I hope it’s continuing.

Murphy, whom I first met in 1992, will lift your spirits as few people can. He’ll be 90 on his next birthday. His mind is alert and his body is nimble. For years I have wanted to go deep with him on his inspiration, to learn how he created Shivas Irons, Scottish teaching pro for the ages. I have also been curious what his feelings are about Tiger Woods. Reporting this book gave me the chance to go deep with him on both subjects.

News
When did ‘The Second Life of Tiger Woods’ truly begin?

I happily make a nod here to by friend and colleague Alan Shipnuck. Thank ye kindly, Alan. Last year’s U.S. Open was held in Shipnuck’s backyard, Pebble Beach. Murphy knows the territory well; he played Pebble when its green fee was $5. Alan invited Mike to join him at Pebble for the second round. I walked with them for a spell. That night, Alan and I had dinner with Mike and his wife, Dulce. In the weeks and months after it, Mike and I had a series of long interviews. Hours and hours of taped conversations.

Let me summarize the conversations, as they relate to Shivas Irons and Tiger Woods.

Shivas Irons owes his life to Murphy’s fascination with Hogan, dating back to the 1950s. That’s incredible to me, because I would say that Shivas is as warm and Hogan was cold, but Murphy saw things in Hogan that few others do. Murphy has some vision.

As for Tiger, Murphy could not imagine that there could ever be a golfer who could move him as Hogan did, circa 1955. Then came Tiger.

Someday I will go to those tapes and do a lot more with them, and go deep on Murphy on Hogan and Murphy on Tiger. The hits—the insights—just kept coming. Mike Murphy can’t help himself. He loves golf, but his real subject is human potential. Enter Hogan. Enter Woods.