Tiger Woods, always a California kid at heart, is back at Torrey Pines

LA JOLLA, Calif. – Tiger Woods has been coming to the famous public courses here forever, for “10 years before you were born,” as Woods said to Jordan Spieth in a 10-hole practice round the other day. Torrey Pines. A sweet name, then and now. The North Course and the South, where Tiger won his last major, our national championship, in 2008. It was in the early-1980s when Tiger and Earl started coming down here to watch the old Andy Williams-San Diego Open. Straight shot down I-5 from the family home in Cypress, in a dead-flat development of tidy homes and runaway American dreams. In ’82, Johnny Miller finished a shot ahead of Jack Nicklaus here. Tiger was six, and already paying attention. Genius doesn’t wait for you to fill out the forms.

Woods will play today with Tony Finau and Xander Schauffele, off at 10:40 a.m., local time, on the South Course, a shot or two harder than the North. On Friday, that threesome will play the North Course, a racetrack, going off at 9:30. He got to know Finau at last year’s Ryder Cup. Schauffele he really doesn’t know. Shauffele was once Tiger, a kid in the gallery, craning his neck for a better view of Woods. Rory McIlroy was saying on Wednesday that he first came to San Diego for a junior tournament in the late 1990s. “I remember, the opening ceremonies there, I got my picture with Earl Woods, which was pretty cool at the time,” McIlroy said. Everyone has a story and a history that is all their own.

The Farmers Insurance Open has a traditional Wednesday pro-am, where the pros play 18 holes, and Woods was in the first group of the day, off the North Course at 6:40 a.m. tee time. You can imagine how early he starts. His 43-year-old body takes longer to get ready to play than most any other player in the top 1,000 in the world. He was hitting range balls under flood lights before the sun was up and posing for his first picture of the day while most of Southern California was still asleep, or waiting for a traffic report.

Woods was paired with four men, three of them Farmers people. One was Farmers’ top-ranked salesperson, an XXL Texan with 12 kids, nine of them adopted from a variety of trying circumstances. Tiger leaned in. One was a company executive who lives in Los Angeles and plays his golf on the same L.A. munis Tiger used to play as a kid. One was Farmers’ top-ranked district manager. The fifth am was Ken Bentley, a member of the Tiger Woods Foundation board. Bentley went to Crenshaw High, in L.A., and Woods went to Western High, in Anaheim, 30 minutes down the road, depending on traffic conditions on the 105.

Woods has lived in Florida for half his life now, but at heart he’s a California kid. The backwards baseball cap, tennis shoes for sneakers, a reference to skateboarding, now and again. He got on the private courses because he was shooting low scores in the SCGA (SoCal Golf Association) events but his real home was the public courses in Los Angeles, Orange and San Diego counties, Earl driving the cart. David Smith, the pro-am partner from L.A., was wearing a Griffith Park hat, and Tiger told him about shooting the original 1996 “I Am Tiger Woods” Nike spot there. If you want to see something spectacular, check out Tiger’s slo-mo swing at the end of that one-minute spot, and everything preceding it. Can you imagine a world under the direction of Weiden+Kennedy? 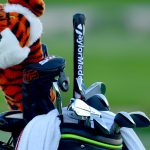 When Woods was at Western High, the team played its home matches at a city course called Dad Miller Golf Course. Today, the first center for the Tiger Woods Foundation is right next to that golf course, a spectacular space-age building with a driving range and a few holes in its backyard. The course record at Dad Miller, which is 59, is held not by Tiger Woods but by a pro named James Tigabasa, who grew up in Uganda when it was ruled by Idi Amin. Tigabasa’s prized golf pupil now is a high-school sophomore, a Tiger Woods Foundation scholar, named Kamille Dimayuga. Tigabasa looks forward to the day that Tiger becomes aware of her play. He remembers the day, years ago, when he ran the foundation’s golf program, and Tiger patted him on the back and said, “You’re doing a good job.”

The Dad Miller driving range is scruffy an excellent. In the fading light, and, despite a cold wind from the north, there were still a few people on the range the other night. Everybody at Dad Miller knows about Tiger’s connection to the place, but that’s not why they are there. They’re there for the same reason Tiger and his teammates were once there. The course has a range and 18 holes, it’s good enough and the price is right.

“Yeah,” Tiger Woods said the other day, settling into a press conference. “It’s great to be back.”