Those who don’t win the U.S. Open are left with various levels of suffering

PEBBLE BEACH, Calif. — The dying moments of the 119th United States Open was like an Irish wake: a mix of the somber and celebratory. Brooks Koepka, having stirred the ghost of Willie Anderson in his quest to win a third straight Open, emerged from the scoring trailer and joined a cluster of his people at the bottom of the stairs. His normally perky girlfriend, Jena Sims, offered a formal peck and only two words: “Good job.” Koepka locked eyes with his agent Blake Smith, who shook his head ruefully. Brooks just grimaced. They didn’t say a thing but it was easy to read the thought bubbles: Almost.

Major championships appear to be a zero-sum game. When Gary Woodland won this U.S. Open everyone else had to lose it. But the Tour brotherhood looks at it differently. To the players, there is nobility in the near-miss. Just then, Jordan Spieth and Justin Thomas rolled up. They were coming from off-campus to congratulate Woodland but along they way they liberally spread bro hugs and good cheer. Thomas, dressed like a teen skate rat in black jeans and a hoodie, embraced Bob Koepka, Brooks’s dad, who was looking to get his hands on a big, fat trophy for the third straight Father’s Day. “Congrats, great run at it,” Thomas said.

Bob concurred: “He played his ass off.”

Jordan and Justin moved on to a knot of Woodland’s friends and family, offering hugs and soul handshakes. Bob Koepka moved closer to the green to watch Woodland put the finishing touches on his victory.

“He deserves this,” Bob said. “After all he’s been through the last couple of years.” It was a reference to the miscarriage Woodland’s wife Gabby suffered in 2017; she had been carrying twins, and a healthy baby boy, Jaxson, was delivered 10 weeks premature but is now thriving.

Amidst the intensity of a major championship, to say nothing of the ebbs and flows of a fantasy season, it can be easy to forget that those between the ropes are not gladiators who exist merely for our entertainment but actual human beings who suffer accordingly. You could see the pain on Justin Rose’s face throughout the back nine. Over the first three rounds he had flown too high on borrowed wings, masking shaky ballstriking with outrageous putting. On Sunday the putter cooled off, as it will, and Rose was exposed. Every bogey he made — there would be four over the final 11 holes — seemed to etch the grimace lines a little deeper. Rose turns 39 next month. It has been six long years since he won his only major championship, and there has been so much heartbreak since, including a pair of runner-ups at Augusta and a near-miss last year at Carnoustie.

While Rose met his inquisitors after the round, his sports psychologist Jason Goldsmith stood nearby and whispered as if at a funeral. “It definitely hurts,” he said. “To have a chance to win one of these and not get it done, it’s always going to hurt a little. But he’ll come back stronger from this — he’s too good, too smart, too dedicated not to. He’ll learn from this and he’ll apply those lessons the next time.” 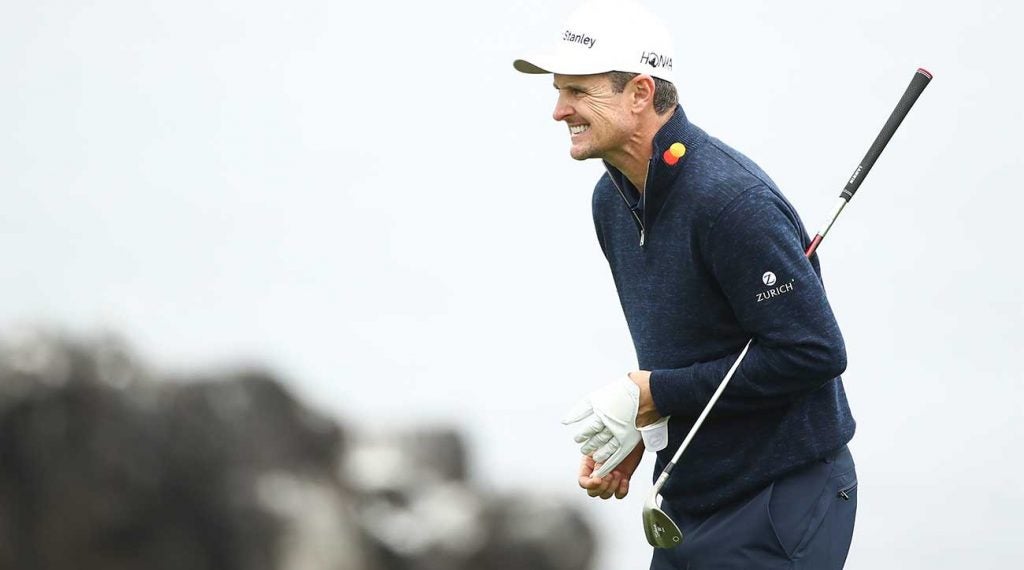 Justin Rose shot a three-over 74 and tied for 3rd at the U.S. Open. He entered the final day one off the lead.
Getty Images

Rose’s caddie Gareth Lord came by, weighed down by the bag and radiating the somber manner of an undertaker. For all the long faces behind the 18th green, two people were strangely buoyant: Rose and Koepka, the latter even shaking off being addressed as “Bruce” by the USGA official who announced his presence at the interview podium. “It doesn’t sting,” Koepka said, referring to the outcome, not the latest little slight. “I played great. Nothing I could do. I gave it my all. I give it my all every time and sometimes, like this week [or] Augusta, it’s not meant to be. I played great. I hit every shot that I wanted to. And sometimes no matter how good your good is, it isn’t there.”

Indeed, Koepka had put a charge into the final round by birdieing four of the first five holes — sandwiched around a spectacular par save on 2 — reminding everyone on the property whom is the game’s new alpha. But loose iron shots cost him bogeys on 8 and 12 and he couldn’t make a putt down the stretch, finishing with six straight pars when he desperately needed birdies to apply some pressure to Woodland. Going back to the 2016 PGA Championship, Koepka has had eight chances to win major championships and closed out four of them, including the last two U.S. Opens. By any measure that is a spectacular success rate. Even as this Open slipped away, Koepka took a moment to appreciate being in the arena once again. “Yeah, it was awesome to come this close to going three in a row,” he said. “It’s incredible. Anytime you can compete in a major is special and to have a chance to go back-to-back-to-back, that was pretty cool. I didn’t really think about it until I was done on 18 and realized how close I actually was to not making history, but kind of tying it, I guess you could say. But it’s a cool feeling, you know?”

Tournaments
U.S. Open 2019: Brooks Koepka didn’t win the U.S. Open, but he captured something he never had before

Rose, too, chose to celebrate the battle and not the outcome. “There’s no point in letting it hurt too much,” he said. “I’m more proud of the fact I even gave myself a chance. I didn’t have my A-game this week. And to contend in a major with no game, really, I take the positive from that.”

And yet Rose had a clear-eyed view of his 74, saying his putter “took a bit of a day off” and that he “gave away a couple cheap bogeys early on the back nine.” This returned the conversation to his scowling visage as he strained to keep up with Woodland. “Yeah, it’s difficult, you know?” Rose said. “But I was enjoying the grind. That’s what I love about it. I’m a back-against-the-wall player sometimes. I love that.”

There is no nuance in the agate. History will show only that Rose and Koepka failed to get it done. But both left Pebble Beach eager to throw themselves into the fray once again. “I’m getting hungrier,” Rose said, and we already know that Koepka is ravenous. “I’m determined. And in these situations you definitely enjoy them and want more of them.”