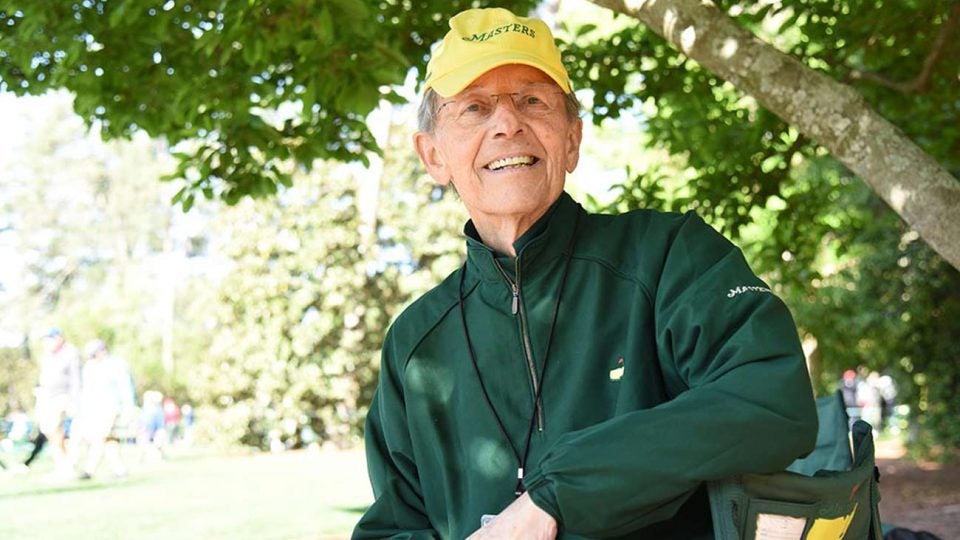 AUGUSTA, Ga. — The Masters means many things to many people, but there isn’t another soul at Augusta National this week who loves the place more than Ed Layne.

Ed is 71 years old and has as sweet a gig as you’ll find anywhere at Augusta. On the first Sunday in April for 18 consecutive years Ed has driven from his home in Trinity, N.C., to Augusta for the week, where he crashes with friends in a rental house and works as a volunteer marshal on the 1st hole. Judy, his wife of 48 years, jokingly refers to the Masters as “Ed’s mistress.”

But shortly after last year’s edition, Ed’s energy began to wane. He skipped household chores. He stopped fiddling in his backyard. His stomach ached. He didn’t want to see a doctor — he’d only been to a hospital twice: once to have his tonsils removed as a kid, and another time about a decade ago when he had an allergic reaction to a spider bite. (Ed caught the insect, entombed it in glass and tucked it into a drawer in his nightstand.) Finally in November, Judy hauled him to the doctor. The news was crushing.

“I tell people I live for four things,” Ed said earlier this week from a camping chair behind the 1st green. “My wife, Judy; my son, Robert; the first week of April; and the third Wednesday in May.”

We’ll dive into each of those shortly, but first, Ed. He loves sports and boating and bluegrass music. He regularly attends church. Like a medium-rare steak, one of his favorite indulgences, Ed’s tough exterior belies a soft center. He’s quick with a joke and eminently likable, both of which have served him well, especially at Augusta.

Ed is the son of Edward Dewey Layne Sr., the co-owner of a window business, and Myrtle, who tended to the home. His parents called him Eddie, but he wasn’t a fan of the nickname. (He disliked his middle name even more.) When Ed was young the family moved to Johnson City, Tenn. He’s a Vol through and through.

Ed was introduced to golf by his father, who played with his friends at a scruffy track called Elizabeth Golf Club. Young Ed would carry dad’s bag on his shoulder and afterward father and son would scarf down 25-cent burgers before dad slipped away to play cards. Ed would wait in a game room, squinting at a TV with three channels, and propping up one side of a Ping-Pong table to knock balls to himself. Hardly the traditional path to Augusta, but it was a start.

The oldest of three boys, Ed played center on the football team at Science Hill High School. Even though he played in the middle of the offensive line and wore No. 50, the guys nicknamed him “Night Train Layne,” after the NFL’s hard-hitting defensive back. Ed liked that nickname more than Eddie. Football was his first love. Steve Spurrier, who would go on to play quarterback in the NFL and coach college football, was Ed’s star teammate.

Before Ed became a fixture at the Masters, he met the girl of his dreams. On Jan. 5, 1965, at age 17, Ed flipped on his varsity jacket and a snazzy plaid hat (he always had a thing for hats) and hopped on a bright red motorcycle that Big Ed bought him at Sears. A friend led him across town to meet Judy Green. When he first saw Judy, tall and blonde, emerge from the house, he was gobsmacked.

“I didn’t go to high school with her, and she was a new face, a beautiful face. It was just … wow,” Ed said.

Judy was also smitten. She found a photo of the football team in the local paper, snipped out Ed’s face and stuck his image in a locket around her neck. “Why in the world would I go home after meeting someone one time and put his picture in my locket?” Judy said with a laugh. “I was too young to understand anything.”

It was young love, but love nonetheless. They dated for five years and were married in Judy’s hometown church, capping a big week for Ed. “I graduated from college, got married and started teaching all in a five-day period in 1969,” he said.

Life was good. The couple could not have children, but they stayed busy. Ed changed careers to human resources at a furniture company, and relocated to Trinity, N.C. He made new friends and played more golf. He once shot a 72.

Ed enjoyed evening strolls around the neighborhood, and one day a boy from the house next door popped out of his house, introduced himself and walked with Ed. It became a regular routine.

The boy, Robert, had a hard life. He was being fostered by Ed’s neighbors, and occasionally moved between his foster parents and his troubled biological parents. Ed and Judy began babysitting Robert and got to know the sweet boy with a broken home. They hatched a plan. They would adopt Robert.

“There were a lot of things Ed and I didn’t agree on over the years, but they were just small things,” Judy said, “With Robert there was no hesitation. We felt it was our calling.”

And so at age 57 Ed became a father to a 10-year-old. Robert craved stability, and Ed was his rock. He introduced his son to sports, led him on hikes along the Appalachian Trail and taught him how to play golf. When Ed got a side job coaching the local school golf team, Robert not only made the squad, but also became one of the top players in the area.

“He made all-conference by one stroke,” Ed said as his eyes began to water. “It was my day of…”

He never finished the sentence, but suffice to say it was a wonderful day. Golf had become an even bigger part of Ed’s life, thanks to Augusta. In the late 1990s one of Ed’s work friends received a spot on Augusta National’s team of Masters-week marshals. (Augusta calls these volunteers “gallery guards.”) A year later, a second colleague landed a similar gig at Augusta. One year later, a third. Ed loved watching the Masters and wanted in. In 2001, one of his colleagues had heart surgery and couldn’t do the job at Augusta, and Ed stepped in to substitute. He’ll never forget his first look at the course.

“I couldn’t take my words back home. There’s nothing like it,” he said.

Phil Chamberlain, a fellow gallery guard on No. 1, remembers Ed’s first day on the job with a wide grin. “He was working by the first-hole scoreboard, where fans walk in. There’s Ed standing there with a big smile saying ‘Welcome to Augusta!’ Then these guys walk a few steps past, over to me, and they say, “I’m from Augusta!”

Once Ed was in, there was no getting him out. He was on time, worked hard and was fantastic with the patrons. All the guards on the 1st hole, who see each other one week a year but keep in touch between Masters, welcomed Ed to their “Augusta family.”

“You could call him up anytime during the year and ask him ‘How many days until we go back to the Masters?’ It could be 173 or 98, it doesn’t matter. He always knew in a second,” Chamberlain said.

In the third week of every May, Augusta National invites its volunteers to return to the club for a day and play the course. Ed has never missed it. His best score is 88, but his favorite round was his first spin in 2001. He arrived at 6 a.m. for his 3:05 tee time and played the par 3 course five times. It began to rain when he was on the 1st tee, and after start-and-stop storm delays, he had the course virtually to himself in late afternoon. In near darkness, he played 18 under the lights from the clubhouse. When he strolled to the parking lot, the only two cars left belonged to Ed and his playing partner.

“I know now that if they knew we were there, they would’ve come and got us,” he said with a smile.

Mentally, he was already deleting his bucket list with Judy and plotting how to take care of his wife and son. He had to be strong for them.

Ed has since endured eight rounds of chemo, and Robert, now 24, has taken a break from work to hang with his dad. In December, Ed drove back to Johnson City for one last round at his hometown club. At six feet tall, Ed used to weigh a sturdy 210, but he’s lost more than 50 pounds since his diagnosis. His health is deteriorating, but Masters week served as a huge motivator — “it kept him breathing,” Judy says — and despite his frail condition, Ed and Judy made the trip to Augusta. His buddies on No. 1 are keeping him comfortable. Ed spends the days seated in his chair under a shady tree behind the green, clad in standard gallery-guard attire: green polo shirt, khaki pants, yellow cap.

He’s still marshaling. On Monday he stopped an interview with a reporter to deliver a stern warning as a fan ran along the rope line. “Hey, sir, no running, please!” he said.

The fan looked at Ed with wide eyes. He was maybe 8 years old. Ed flashed a grin.

“Ed’s kind of the tough, crotchety, lovable curmudgeon,” says Steve Slaughter, a fellow guard on No. 1. “He just loves this event. You feel tough for him.”

Many people are praying and miracles do happen, but Ed is realistic. As his Masters family has passed by to wish him well, Ed has been gracious but direct. “This is possibly going to be it for me,” he said.

Judy is staying in Ed’s rental house with his friends, in case he needs a hand, but so far, so good. Ed is skipping a chemo treatment to be here, and Augusta has energized him.

“I thought this was going to be the best week of my life when I got here, and it is,” he said.

“I hope I feel better in May, because I just want to come back here.”