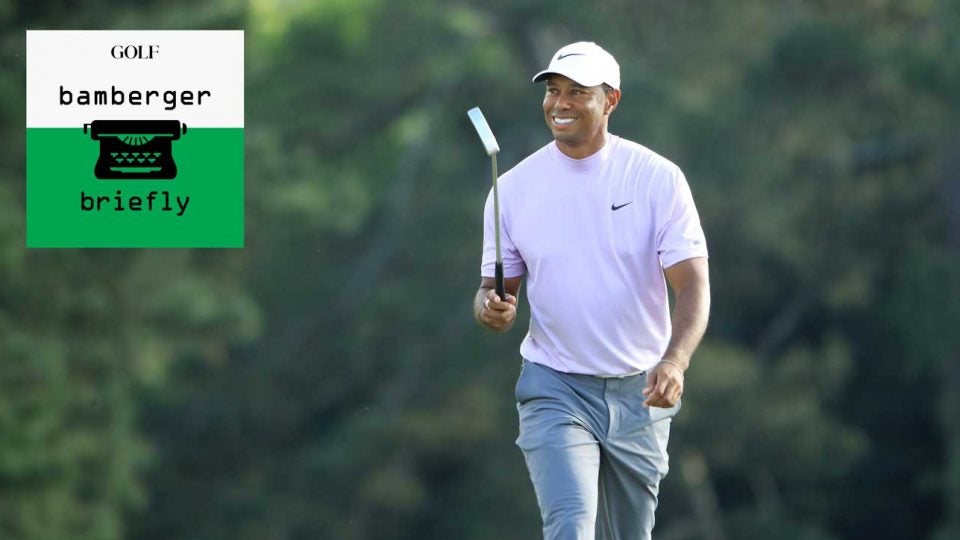 Tiger Woods, in the hunt to win the 2019 Masters, showed some happiness we hadn't seen from him in a long time.
Getty Images

I have been watching Tiger, reading about Tiger and writing about Tiger for about 25 years now. In other words, not very long, and it’s gone too fast. I’ve watched him in person, on TV, via YouTube clips with a shelf-life of forever. At times, I have had tall piles of books about Woods in my office and now, on its floor, is a black gym bag with a broken zipper half-filled with notebooks from 2017, 2018 and 2019, when I watched Tiger make an unlikely comeback from his roadside arrest (May 29, 2017, 2:49 a.m.) to his fifth win at Augusta (April 14, 2019, 2:29 p.m.). I have heard people say they have never seen Tiger happier than he was on that afternoon in Augusta. My guess is that there were a host of competing emotions vying for space on that Sunday afternoon. Happiness, sadness, vindication, satisfaction, relief, surprise, empathy, love, gratitude, pride, disbelief and its opposite. There was a lot of screaming. He signed his scorecard in pencil. I wish I could have seen what he did with when he got to the s. Happy had to be the main thing.

For pure happiness, two other moments, over the course of those 23 months, come to mind. I’m not going to count the Rose Garden ceremony on May 6 of last year, when President Trump gave Woods the Presidential Medal of Freedom, although he was surely happy then, too. But that moment was exceedingly public and Tiger is such a skillful actor that you always have to remind yourself that what you see in his public life has elements of acting in it, or can. So I’m not putting that day in this top-two. I’m tempted to put the day in September of 2018 when he won the Tour Championship, his first win on Tour in five years, but that’s almost too obvious. So, no.

So here it is, the two moments that rise to the top for this reporter. Both are moments when there were hundreds of people around but Tiger seemed to be barely aware of them. The first of these came in February of 2019, on the Sunday at the end of the Genesis Open, what we of a certain age call L.A. The week had been long and wet and Riviera is in places hilly and Tiger’s play was sloppy. The tournament was over and you could see how tired he was, climbing the steps to the clubhouse from the 18th green. His legs looked heavy. His pace was slow. And then he saw a young woman with dark skin and dark hair and he lit up. She looked like maybe a high school or college golfer but I had never seen her before. Her name was Pratima Sherpa and she had grown up in a shed near the Royal Nepal Golf Club. Tiger had become aware of her life story, her unlikely path to high-level amateur golf. He has become a mentor to her. He saw her, hugged her, asked her to walk with him. Maybe she reminded him of his own dreams, his own path. He was happy.

The other time was after the Friday round of last year’s Masters. He had shot a second-round 68. It was a beautiful, still, warm night. He was one shot off the lead. There was all manner of players ahead of him (five in all) and three others tied with him and two right behind him by a shot. The weekend, if he played well, would have to be stressful. Majors are stressful. Trying to win a major is even more stressful. Being in contention is stressful. It is when you have Tiger’s makeup. But on that Friday night, as he walked to the clubhouse, you didn’t see a bit of stress. He was literally smiling, like a kid entering a carnival and seeing his friends. He was in it. He was where he wanted to be.

Michael Bamberger may be reached at Michael_Bamberger@Golf.