Stuff I might have tweeted if I was on Twitter: 13 post-U.S. Open thoughts from our non-tweeting writer 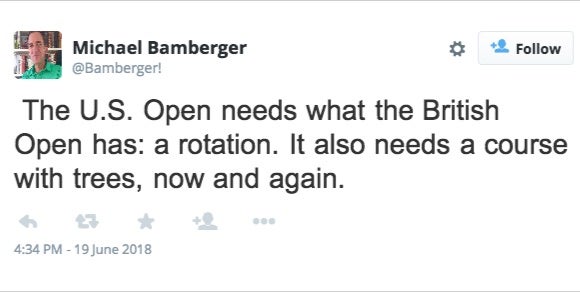 Ed. note: You won’t catch our analog-minded senior writer Michael Bamberger on Twitter anytime soon. But that doesn’t mean his mind’s not full of tweet-ready material. In the third installment of Stuff I Might Have Tweeted, our scribe reflects on and why the USGA shouldn’t have apologized, Curtis Strange’s commentary chops and the legacy of the great Peter Thomson. (We did not — and will not — limit him to 280 characters.)

2. I am of the opinion that Watson is the greatest links golfer in history. He and Thomson each won five, but Watson played much deeper fields. He won in his first appearance, in ’75, and lost in a playoff in 2009, at age 59. Plus three senior Opens, on classic links courses.

3. Amy had it exactly correct on Father’s Day: Phil had a bad day in the office. Too bad he didn’t acknowledge that after playing on Saturday.

4. On an emotional level, most people, I among them, think Mickelson should have been DQ’ed. It’s the rulebook that kept him in, just as it did John Daly in 1999 at Pinehurst. Should the rule be changed? Yes.

5. I miss the old stern USGA. Mike Davis is a truly knowledgeable and caring golf person. He had nothing to apologize for Saturday night. Courses change with the wind, literally and figuratively.

6. A friend suggested that the R&A should set-up the courses for the U.S. Open. It’s actually a good idea. Not literally, but on a consulting basis. Likewise, the USGA should use Nick Price, already in the fold, more. He’s one of the smartest people in golf.

7. Lost in the excitement and the noise was the USGA awarding its highest honor, the Bob Jones Award, to Dennis Walters, a trick-shot artiste confined to a wheelchair. He was introduced by two former Bob Jones winners, Barbara and Jack Nicklaus. Dennis’s pass at the ball is metronomic, hypnotic — and his life story an inspiration.

8. The U.S. Open needs what the British Open has: a rotation. It also needs a course with trees, now and again. I’d suggest Shinnecock Hills and The Country Club (East Coast), Oakmont and Crystal Downs (Midwest) and Pebble Beach and Los Angeles Country Club (West Coast). Maybe once a decade, tops, you bring back a golden oldie or introduce something new and special. Regarding Crystal Downs: Do what you need to do to make it work.

9. The USGA is actually trying too hard. Once you pick a course, just narrow the fairways, grow some rough, pick some challenging pins. Hole locations, as Curtis says on TV.

10. The best thing Fox has is Curtis. Part of it, of course, is his two Open wins. The bigger part is his candor, straight-forwardness, on-the-ground understanding of it all.

11. Anytime you have rough where a ball cannot be found without volunteer spotters, your rough is way too deep. This was the case at Shinnecock Hills. It’s the case at the Open every time the British summer is wet. And that’s often.

12. What Brooks Koepka did was astounding. Two win consecutive Opens on two totally dissimilar courses with hand surgery and a long layoff in between is a stunning achievement. He reminds me of … Mickey Mantle.

13. Courses take pride if they have greens like Augusta National’s (though nobody does). Or bunkers like Pine Valley’s (ditto). Or length like Oakmont’s (who wants that?). Three better goals for any course should be to have the greens and tees near each other; rough that’s rough — rough terrain — but in which you can readily find your ball; a walk anytime policy, carrying your own or using a trolley. #Simplify,simplify #Thoreau