A new major champion graces the cover of Sports Illustrated this week, and it’s one that has been a long time coming.

Sergio Garcia earned himself the SI cover treatment for his playoff win over Justin Rose at the 2017 Masters. It’s the Spaniard’s first major title in 74 starts, and his first national SI cover.

Garcia birdied the first playoff hole Sunday evening, stealing the title away from final-round co-leader Rose, who bogeyed that same hole. Garcia has been playing the game competitively for two decades, but had yet to breakthrough on the main stage, finishing runner-up in other majors four times. Garcia became just the third Spaniard to win the Masters after Jose Maria Olazabal and Seve Ballesteros, who would have celebrated his 60th birthday on the eve of Garcia’s win. 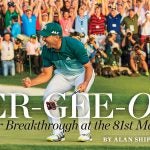 You may also like Viva Sergio! The Spaniard claims his first major win after 73 attempts

The victory now removes Garcia from the conversation of best players without a major win, though the new Masters champion is keeping his perspective.

“To be totally honest, I’m very happy but I don’t feel any different,” Garcia said. “I’m obviously thrilled about what happened here today, but I’m still the same goofy guy, so that’s not going to change.”

Copies of the history-making cover will be available on newsstands Wednesday, April 12.