Next on the tee: Rose Zhang

Rose Zhang was 9 years old when a family friend dropped off golf clubs for her dad.

Zhang had picked up all of her dad’s hobbies, especially tennis. This one, however, was new to her. But she had to try. She snatched a club, took a stance and swung — and missed. Then she whiffed again. Then, on the faithful third try, she hit it flush, this time sending the ball nearly out of the yard.

“That was when my dad was like, ‘OK, maybe you should try some lessons,” Zhang remembers.

A few months later she won her first tournament, and now she’s the top-ranked girl in the Class of 2021. The 15-year-old will also be one of the youngest players to compete in the Augusta National Women’s Amateur next week.

“[Qualifying] was definitely something that was in the back of my mind, but I didn’t really think of it until the invitations were coming up,” said Zhang, the 24th-ranked women’s amateur. “So I guess it’s something I didn’t really expect to happen to me, but the more I played my best it gave me the opportunity to be a part of it.”

Zhang was introduced to George Pinnell when she was 11, and he’s been her swing coach since. Their standing weekly lesson is 4 p.m. on Thursdays at Pinnell’s academy in Rowland Heights, Calif., 30 miles from Zhang’s parents’ home in Irvine, Calif. She never misses it. Last year in the week leading up to the Rolex Girls Junior Championship she came every day, “sicker than crazy,” Pinnell says, to work on her alignment. 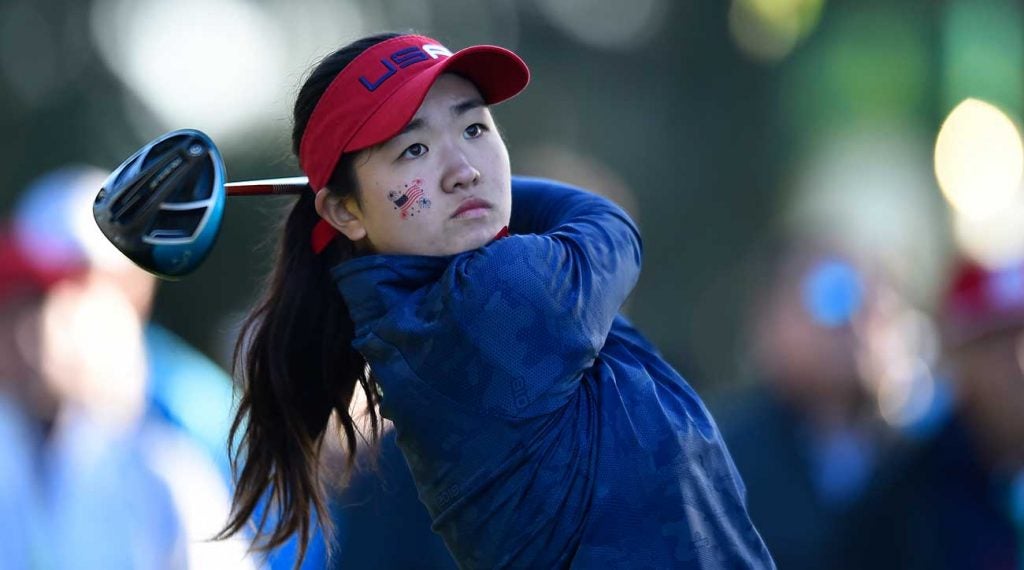 Off the course Zhang is humble and polite and listens to audio recordings of the Bible to relax the night before tournaments. On the course she exudes a laser-like focus that’s driven her to No. 1 in the Rolex AJGA Girls Rankings, but it didn’t come without the work. After a successful run on the SCPGA Junior Tour’s Players Tour, Zhang, despite several top 10s, struggled to notch her first victory on the top-tier Toyota Cup Tour in 2015. During the offseason, around Christmas, she called Pinnell and asked an innocent question that only a 12-year-old could pull off.

“I laughed,” Pinnell remembers. “I said, ‘Well, Rose, listen. It’s going to happen; you just gotta keep doing what you are doing and keep giving yourself a chance to win. It will happen for you.’ It’s not so much winning the tournament — she wanted a trophy.” Pinnell often tells her, “Everything will take care of itself if you just take care of your golf ball.”

Two months later, in the first Toyota Tour Cup event of the season at Industry Hills, Zhang won and received a shiny silver jug the size of a watermelon. Her smile spans the entire photo. Then she won an AJGA event, and then another Toyota Tour tournament.

“Right after that,” Pinnell says, “it all started.”

In 2018 Zhang rose from 218th in the Women’s World Amateur Golf Ranking to 28th at season’s end. Her signature victory came at the ANA Junior Inspiration in March, which led to a celebratory leap into Poppie’s Pond, following in the footsteps of ANA winners Dottie Pepper, Patty Sheehan, Karrie Webb, Annika Sorenstam, Stacy Lewis, Lexi Thompson and Lydia Ko, among others. That win got her an exemption into the following week’s ANA Inspiration, the LPGA’s first major of the season.

“I usually don’t try to change up my practice sessions [for big events],” Zhang says. “I try to prepare for events the same way I always do to help my game become more consistent.”

Pinnell stopped by the Zhangs’ house to pick up items for an additional week-long stay and then drove the 100-plus miles east to Rancho Mirage, Calif., where the 14-year-old later made the cut and tied for 60th, ahead of names like Paula Creamer, Morgan Pressel, Danielle Kang and Brittany Lincicome. (She was invited back to the ANA this year but will play the ANWA instead.)

“I wasn’t really [surprised she made the cut],” Pinnell says. “I know what the girl can do. She has something about her, something you can’t coach. The ability to claw back and get to where she wants to be.” 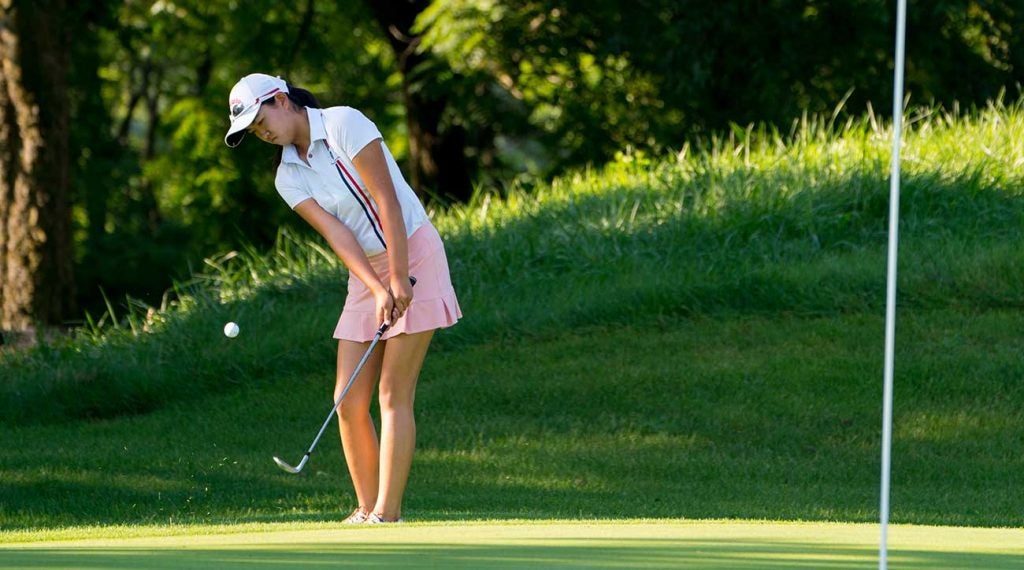 Rose Zhang chips onto the 10th green during the 2018 Girls Junior PGA Championship. Zhang closed with a 66 and tied for 2nd.
Getty Images

But Zhang is never complacent, and she’s quick to deflect any credit Pinnell throws her way. Sometimes he does it just to toy with her. One time at a Callaway club-fitting, Pinnell knew Zhang was within earshot when he was talking to a staffer.

“She’s really hitting the ball really well—” George started, before Zhang cut him off. She pointed the shaft of her club directly at him.

“George, don’t you dare say that,” she said.

Zhang hits it 250 off the tee and is a good putter, but Pinnell says it’s her steely mentality — he credits her dad for this — that might be her best quality. Pinnell says she was so focused on her own game at the Ping Invite last year that she actually thought she lost. When she finished and finally looked at the leaderboard she realized she had won her third AJGA event of the year and fifth overall.

“She does some amazing things,” Pinnell says. “She’ll be three back of the leader and the next thing you know she finds a way to get something done. She’ll catch the leader and end up winning by a shot. It’s just stuff like that. She’s really a grinder.”

In February, Rose checked off another accomplishment. She claimed the top spot in the Rolex AJGA Rankings for the first time. The next time she saw Pinnell, walking into one of their lessons, he had to give her a hard time about it. Another accolade for the humble Cali kid.

“Well, now what are you gonna do?” he asked her. Zhang didn’t say much. “She doesn’t like hearing about being No. 1, either.”