DUBLIN, Ohio — After a sizzling round of 64 Saturday at the Memorial, Rory McIlroy was asked to look ahead to the U.S. Open, two weeks away at Shinnecock Hills. In his opinion, did the USGA, which handles course setup at Shinnecock, realize just how good Tour players are? McIlroy had clearly given this some thought.

“No, see I think the USGA thinks that we’re better than we actually are, if that makes sense. I think they overthink it,” he said. “I don’t think it should be as much of an exact science to set up golf course as it is. I mean, get the fairways sort of firm, grow the rough, put the pins in some tough locations, but fair, and go let us play.” 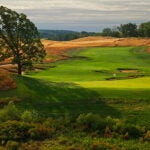 McIlroy cited examples from the past few U.S. Opens, where he said the USGA has mishandled course setups. “It’s been a very reactionary few years to what happened at Chambers Bay, to Oakmont, to then, because I think they felt Erin Hills was going to be similar to Chambers Bay, they soaked it and made it really wide, and all of a sudden 16 under par wins again, and they’re like, ‘Um, what just happened?’ So I think they have to take previous results out of their head and just say, ‘Okay, let’s set up this golf course as best as we can and just let the guys go play.'”

In 2017, rough was cut the week of the U.S. Open at Erin Hills after player complaints early in the week. McIlroy was critical of the complaints at the time. “If guys can’t put it into play within a 50-yard zone I don’t think they’ve got anything to complain about,” he said.

When asked for a course that he thought was set up well, McIlroy offered up the 2016 U.S. Open as an example. “I thought Oakmont was really good. Bethpage, that was really wet and long and — no, I thought they did great with Oakmont. You don’t need to do much with Oakmont to have a U.S. Open there.”

McIlroy added that he’s looking forward to the upcoming U.S. Open locales. “I’m looking forward to going to some of the more traditional venues,” he said. I haven’t played [2020 site] Winged Foot, Pebble’s Pebble, it can get firm and tricky, and then I guess Torrey Pines and Bethpage again. And Brookline, The Country Club, that’s going to be an awesome one as well. So there’s some really good venues coming up, which I don’t think they need to do much to the golf courses, just set it up somewhat tough and let us go play.”