NEWTOWN SQUARE, Pa. (AP) — Rickie Fowler has stayed at home for the last three weeks and two FedEx Cup playoff events because of a partial tear to his right oblique, which he says might turn out to be the best for him.

Players at his level face one of the busiest stretches of the year with four FedEx Cup events in five weeks, followed by the Ryder Cup.

“It wasn’t planned to miss, but it could end up being a good thing with the stretch we have coming up,” Fowler said. “So glad to be back. Nice to be back without pain.”

The first order of business is making sure he doesn’t play one week and then be forced into a two-week break ahead of the Ryder Cup on Sept. 28-30 in France. By missing the two FedEx Cup events, Fowler dropped from No. 17 to No. 26. Only the top 30 after this week go to the Tour Championship.

Fowler says the injury to his side occurred over time, though he still remembers when he knew it was an issue.

“Seventh tee, 6-iron at Akron on Saturday,” he said of the Bridgestone Invitational on Aug. 4. “I felt a little bit of discomfort there leading into it but that was where I really felt it and played through it Saturday there and Sunday and then tried to rest and recover as much as I could going to the PGA.”

He started the final round of the PGA Championship just three shots behind, but closed with a 71 and was never a factor.

Fowler said he spent the last three weeks at home in Florida using ice, heat, pain medication and a laser machine. He has a friend who is a spinal neurosurgeon, and Fowler says he used a laser machine two or three times a day. 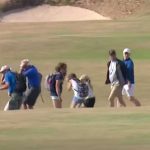 He thought about returning last week at the TPC Boston, where he won in 2015, but he didn’t start playing until two days before the Dell Technologies Championship and didn’t think he had prepared properly.

There also was that text from Ryder Cup captain Jim Furyk, who said he was passing along a message from former captain Davis Love III.

He said, ‘No one has ever said they came back from injury too late,'” Fowler said. “That’s what kind of helped make the decision. Let’s make sure we’re good to go for these final two playoff events, and especially the Ryder Cup.”

Fowler is among 21 players who played Aronimink when it hosted the AT&T National in 2010 and 2011 (as Congressional was preparing for the U.S. Open). Fowler played in the final group in 2011 but shot 74 and tied for 13th.