In search of the Perfect Match: A comprehensive prediction of every pairing for the 2018 Ryder Cup 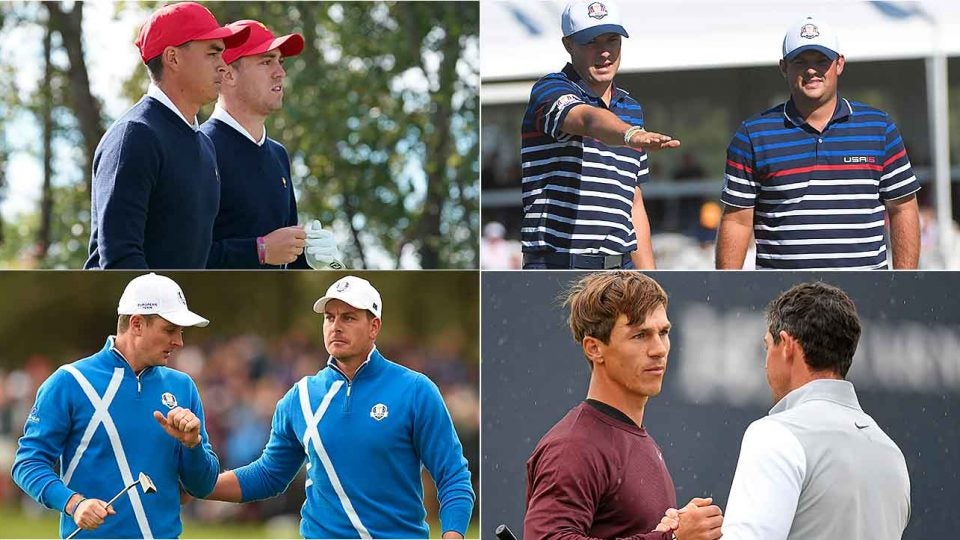 The Ryder Cup is less than two weeks away, and while many of the key pre-event decisions have been revealed (Captain’s picks! Sweaters!), one of the most crucial, hotly anticipated and – you better believe it – second-guessed moves are the pairings. While some dynamic duos are all but set in stone, many other intriguing combinations are out there. Here’s a look at how the pairings could go down at Le Golf Club, from the most likely to the longest of long shots.

Given that so many players on the squad have enjoyed recent success at the previous Ryder and Presidents Cups, the U.S. pairings already feel mostly set, at least to start the week. But that doesn’t mean a few surprises can’t pop up along the way.

They were a revelation as rookies at Gleneagles and strong once again at Hazeltine. Through two Cups, their record as a pairing stands at 4-1-2. The gold standard for R.C. tandems, Seve Ballesteros and Jose Maria Olazabal, went an absurd 11-2-2. With another big week, Spieth and Reed could stake their claim as one of the best Ryder Cup duos ever. Maybe not quite as great as the team once dubbed the “Spanish Armada,” but they’d at least enter the conversation.

They greet each other on the final hole of tournament wins. They spring break together. And they were lights out last fall as a Presidents Cup duo, going 2-0-1. Don’t be surprised if captain Furyk taps them to lead off Friday morning’s opening session in Paris.

Koepka won two matches with Brandt Snedeker at Hazeltine, but Sneds isn’t on the team this time around. Instead, the newly minted three-time major winner should be a slam-drunk match for DJ – who can not only slam-dunk a basketball, but also would no doubt enjoy linking up with his workout buddy. DJ and Koepka went 0-1 at Hazeltine but 2-0 as a team in the U.S. runaway win at last year’s Presidents Cup. Koepka’s continued ascendance only makes a pairing with DJ more formidable.

Before DeChambeau went bonkers late in the summer to lock up a captain’s pick, Woods openly lobbied for him to make the squad. If Tiger wants you on the team, he probably also wants you as a partner. Woods could get a little extra juice from the rookie, who at 24 will be the youngest player in the event. As golf’s ultimate lone wolf for most of his career, Woods has a lousy record in the team-event sessions (9-16-1), but this older and mellower Tiger should be easier to mix and match. DeChambeau is, as we know, an emotional player, and he should get the first crack to mesh with Woods.

This pair went 2-0 at the 2012 Cup at Medinah but didn’t jive two years later at Gleneagles (then again, not much went right for the U.S. that week). Both have enjoyed resurgent seasons. This is their chance to erase that rough week in Scotland, and it says here they’re paired at some point on Friday, but only get another shot if they show well in that first match.

Phil doesn’t have an obvious partner in this one, as recent sidekicks Kevin Kisner and Keegan Bradley aren’t on the team. He draws Finau by process of elimination, but it’s possible this pairing is a smash success – Finau ranks 17thin strokes gained off the tee this season, and Mickelson quietly checks in at 4thin putting. Put them together and you might get a lethal combo. But for what it’s worth, Phil might be better off on the bench for alternate shot, as he ranks 192nd– out of 194! – in driving accuracy on Tour. It’s also possible that Mickelson and Finau mix and match partners throughout the week. 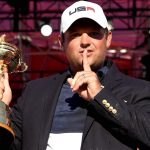 You may also like ‘We’re the underdogs’: American star Patrick Reed says Europe is the Ryder Cup favorite

They’re streaky players, but they’re also practice-round friends who went 1-1 at the Hazeltine Ryder Cup. Wouldn’t be surprising to see them teamed up at least once.

They’re good buds and would make another fun duo. Hard to imagine Spieth and Reed splitting, let alone Fowler and Thomas, but if it happens this feels like the way it would go.

If it doesn’t work with Webb, this could be another way to get Bubba on the course, matching him with a fellow power player but more even-keeled personality.

Probably Not But It Sure Would Be Fun

Imagine Reed, who already has a knack for elevating his game to ridiculous heights in this event, playing alongside his childhood hero? The only downside from this pairing’s inevitable 9 & 8 win would be that it cuts short Reed’s chance to shoot 54 on his own ball.

The dynamic has changed between these two since their apoplectic 2004 pairing, and Mickelson even said at the Northern Trust that he hopes to team with Woods in France. There’s a non-zero chance it happens, but that decision could easily mushroom into a team distraction, which is why captain Furyk should probably avoid it. If nothing else, Woods and Mickelson will stand atop the same tee box in November in Vegas.

With five rookies on the squad, look for Europe to mix and match its fresh faces with wily veterans. It’s a tougher team to predict, but he’s a guess.

Europe’s toughest and most reliable pairing, they’ve gone 4-2 as a duo in the past two Cups. You’ll see them out there Friday morning, possibly in the first match of the day, where they could set the tone for Europe’s entire week. No pressure, guys.

The veteran Casey would be a good match for most any rookie on this squad. Pairing him with his countryman at some point seems like a near-certainty, especially given that they have experience together in a team event: Earlier this year at the EurAsia Cup – yes, while the U.S. played a Presidents Cup as essentially an R.C. warm-up, the Euros also compete in a lower-wattage team event they tend to dominate — Casey and Fleetwood rolled Ben An and Kiradech Aphibarnrat 4 and 3 in best ball. By the way, Thomas Bjorn captained that European team to a 14-10 win. Five members from that EurAsia team will compete in Paris: Casey, Fleetwood, Stenson, Tyrrell Hatton and Alex Noren.

Another all-England pairing with a wily veteran and a Ryder Cup newbie. Poulter is 12-4-2 all time in the Ryder Cup and would likely get the best out of most any rookie. Recently it was announced that Poulter and Hatton will team up to represent England in November’s World Cup of Golf in Australia … so if this duo has plans to play for their country in November, call it a high probability they’ll play for their continent in September. Look for them in an early session with the potential for more. 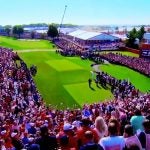 You may also like ‘I’m going to be very nasty’: Top French golf official rips French golf culture on eve of Ryder Cup

McIlroy formed a sweet pairing with rookie Thomas Pieters at Hazeltine, where they went 3-0. The Belgian bomber isn’t on this squad, but Olesen, who like Pieters is on the rise entering his first-ever Cup, could be a nice fit for Rory. Olesen’s stat profile reveals a well-rounded game with no glaring strengths or weaknesses (92ndin driving, 97thin approaches, 96tharound the green, 61stin putting). It’s also possible Rors, whose strength continues to be off the tee, pairs with a small-baller like Hatton.

Europe is far too savvy to set its pairings based on home countries, but it’s possible these emotional Spaniards match up for at least a session. If so, expect fireworks! But there might be a better match for Rahm elsewhere…

Two aggressive players and superb ballstrikers with diametrically opposite temperaments. Noren is sixth on the PGA Tour in strokes gained putting (he ranks 12thon the Euro Tour), and if he rolls a few in, Rahm, who excels off the tee (ranking 5thon the PGA Tour and 4thon the Euro Tour) would feed off it. Europe doesn’t typically pair two rookies together, but with five first-timers on the squad and Rose-Stenson locked in as one tandem, Bjorn will likely try an all-rookie pairing one way or another. This duo could ham-and-egg their way to a great week.

Another all-English team Bjorn could call upon. At the EurAsia Cup, Casey and Hatton beat Aphibarnrat and An 2 and 1 in alternate shot. The previously listed pairings seem more likely, but it’s possible that Casey and Poulter mix and match for alternate shot and best ball.

If Stenson isn’t fully healthy, or if captain Bjorn wants to try to squeeze more points out of his top players, he could create yet another all-England duo. Rose and Poulter have a bright history of their own, going 4-1 together in prior Ryder Cups. With Rose’s ballstriking and Poulter’s clutch putting, this team could thrive in alternate shot.

If you’re breaking up Rose, then Stenson needs a new home. This would be another callback to the EurAsia Cup, where Rose didn’t play and Stenson-Fleetwood teamed in alternate shot to take out Shiv Chawrasia and Anirban Lahiri 3 and 2.

Molinari has a hideous Ryder Cup record (0-4-2) but he enters this Cup at the tail end of a career year. His low-key demeanor could offset the smoldering Sergio, who has played some of the best golf of his life in this event. Molinari led the Euro team’s points list, and he seems like the team’s chameleon – pair him with almost anyone and it could conceivably work. But the personality contrasts and twin iron games in a Frankie-Sergio team could blend well.

Probably Not But It Sure Would Be Fun

With a Rose-Stenson pairing a near certainty, Europe could spread out the rest of its biggest stars to pair with unknown quantities. But given Rahm’s penchant to run, uh, hot, and Rory’s fire for this event (do you really need a reminder?), this would be one wildly emotional and entertaining pairing.

And if they faced Spieth and Reed? Grab a chair and crank up the volume.