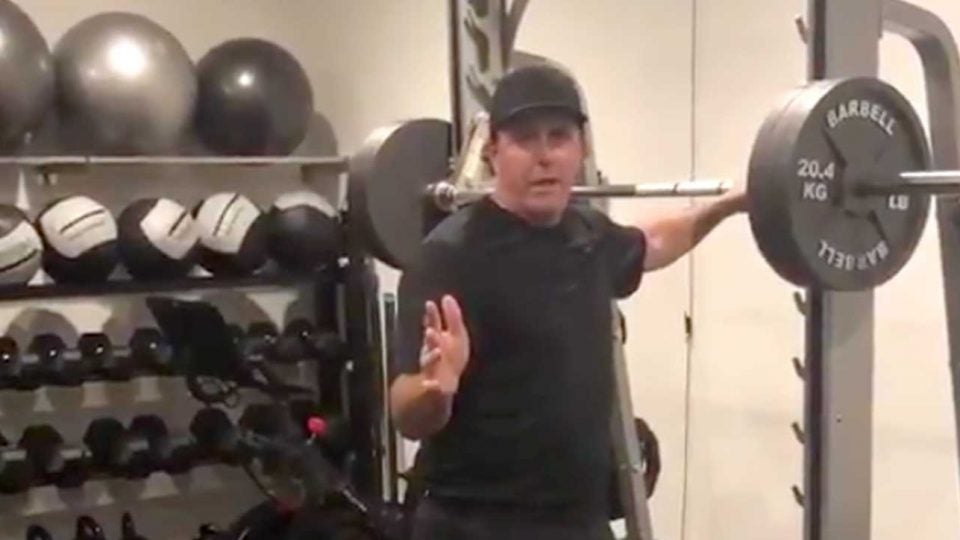 Phil Mickelson has been one of pro golf’s most compelling personalities ever since he joined Twitter late last year.

He’s starred in viral dance videos and thrown shade at Matt Kuchar while driving down Magnolia Lane. And in his most recent video he’s taking playful aim at a new target: Bubba Watson.

Mickelson, who (if you somehow haven’t noticed) has linebacker-sized calves, started a five-part “Phil Kwon Do Calves” series on Twitter last month. The first video came out on March 22, the second on March 26 and the latest, which he said was parts three, four and five, was published on Monday.

The goal of these videos? For one, entertain golf fans. But two, to help the rest of us get calves like Mickelson.

Mickelson opened the most recent video by saying he was going to accelerate the learning rate with the final three parts of the series all in this one video. His jab at his pal, Bubba, came next.

“There’s a lot of debate on how to hit bombs,” Mickelson said, looking into the camera. “Is it the arms? Is it the calves? Well, technically you don’t need either. I mean, Bubba Watson hits bombs. But it’s best if you at least have one, and if you are blessed to have both, well, then bombs are a given.”

Parts 3, 4, and 5 of Phil Kwan Do calves. You’ve mastered the point and pull, now let’s get it to the finish line. #CalvesLikeAdonis #PhilKwanDoCalves pic.twitter.com/mCj67eqlsY

Mickelson’s shot at Bubba comes two weeks after Watson tweeted a playful workout video after Woods won the Masters. “Tiger Woods inspired us all, so I’m at the gym in my house this morning,” Watson said. “And Phil Mickelson, calve workouts? That’s not how you hit high bombs.”

Mickelson is among the headliners in Charlotte, N.C. for this week’s Wells Fargo Championship at Quail Hollow.