Playoff at the PGA Championship? These three holes will decide it at Bellerive 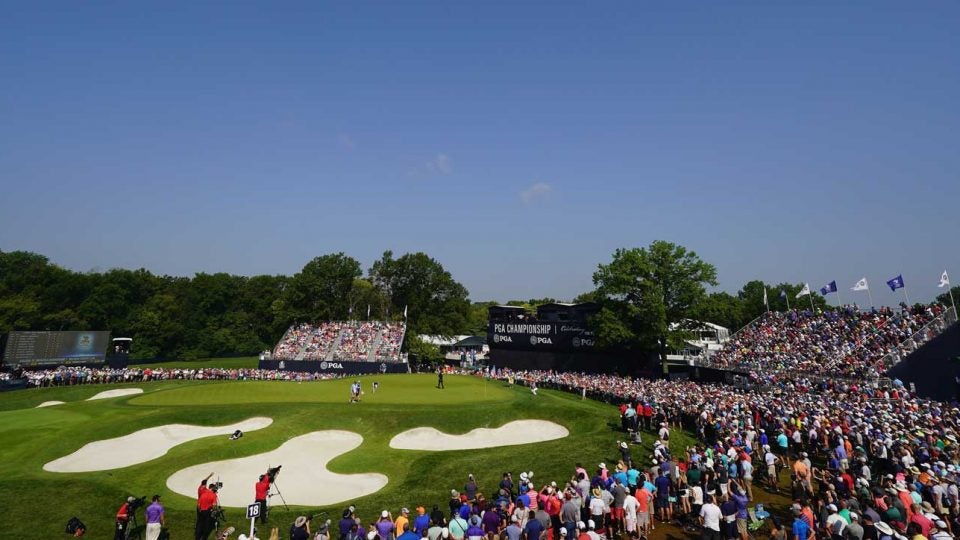 The 18th at Bellerive will be the final hole in a three-hole aggregate stretch if the PGA Championship finishes in a playoff.
Getty Images

ST. LOUIS — Will we see a playoff at Bellerive?

Sunday’s leaderboard is certainly setting up for some magic. If the PGA Championship reaches a playoff, the final three holes will decide the champion. The PGA Championship uses a 3-hole aggregate score to determine a winner, entering sudden death after that.

At Bellerive, those three holes will be 16, 17 and 18, a great mix of difficulty as the players vie for the Wanamaker trophy. 16 is a long par 3, playing 237 yards between two huge bunkers short of the green. As of 4:30 p.m. it was playing 3.129 strokes on average. The 17th hole is a long par 5, listed at 597 yards, but is one of the easiest holes at Bellerive. Though it surrendered no eagles early Sunday, it was playing 4.706 strokes on average. It’s definitely a birdie hole.

The final hole of the three is the 18th, a tricky par 4 that played easiest Saturday, but was much longer Sunday, at 457 yards. It played just a hair under par for the field Sunday.

After the 3-hole aggregate, if players are still tied atop the playoff, they’ll play the 18th hole again. If (somehow) still tied after that, players will play nos. 10, 16, 17 and 18 in sudden death sequence.