‘One of the great traditions in golf’: Legends meet for PGA Championship Champions Dinner at Bellerive 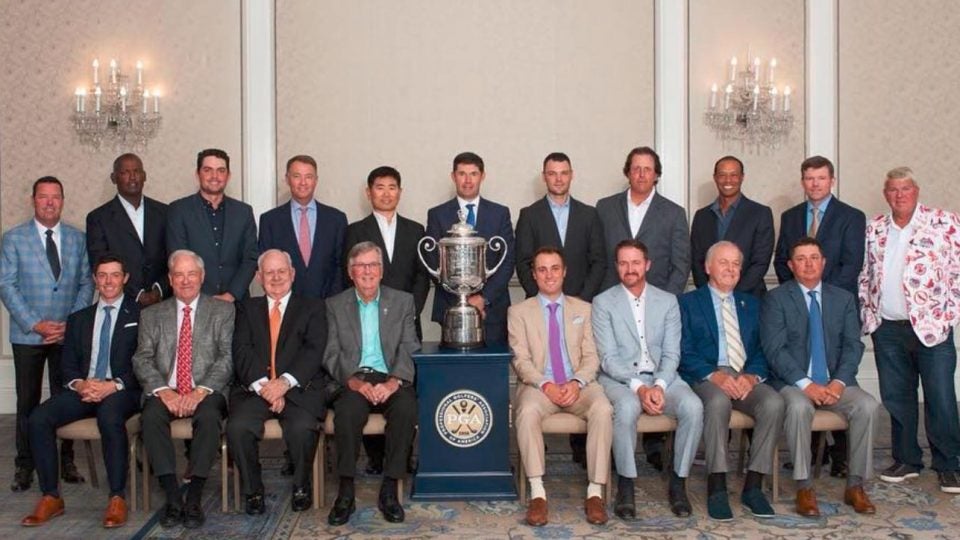 Past PGA Championship winners gather for the annual Champions Dinner at Bellerive.
@rorymcIlroy

Everyone knows about Augusta National’s long-running tradition of holding a dinner for past champions Tuesday night of Masters week, but many do not know that the PGA Championship has a similar tradition.

Much like at the Masters, the only people invited to the dinner are those who have hoisted the Wanamaker Trophy. The meal honors the reigning champion who, just like at Augusta, gets to choose the meal.

This year, 2017 champion and World No. 2 Justin Thomas started off with a St. Louis Barbecue Wedge, in a nod to the tournament’s host city. For the entree, they dined on Filet Mignon and Chilean Sea Bass, washed down with a Cakebread Collars Chardonnay and Napa Valley Justin Cabernet Sauvignon. Dessert was simple warm chocolate chip cookies with homemade vanilla ice cream.

The group photo from the event shows a murderer’s row of golf legends, including new friends Tiger Woods and Phil Mickelson. The two modern greats stood next to each other for the photo op. Two-time champ Rory McIlroy posted the photo to Instagram, along with the declaration, “One of the great traditions in golf.”

One of the great traditions in golf #PGA100 #ChampionsDinner

For some champions, like Rich Beem, the dinner offers a chance to reconnect to the Tour and the championship that made their names.

As time passes, attending the Past Champions Dinner brings more meaning to me to what I was able to achieve. Historic night being the 100th playing of ⁦@PGAChampionship⁩, honored to be a part of it. pic.twitter.com/nR8ciqM9MU

There’s little doubt that Thomas’s menu pleased the diners in attendance, but that won’t earn him a chance to do it all again next year. He’ll have to win his second-straight PGA to regain that honor.