At 27-under, Patrick Reed broke the Tour record for relation to par through 54 holes.
Getty Images

KAPALUA, Hawaii — Patrick Reed sat back in his chair, the question hanging in the humid air. It was two nights before the Tournament of Champions was to begin, and Reed and his wife Justine were lounging on the lanai of their rented house, the ocean audibly crashing down at the bottom of the hill.

Reed was still in his golf togs from that day’s practice round, but his shirt was untucked and his spikes had been swapped out in favor of black cowboy boots. (“I don’t even own a pair of sneakers.”) The Reeds’ adorable eight-month-old daughter Windsor Wells was inside the house, cooing in her grandma’s arms. Justine’s sister serves as the couple’s nanny, her brother as Patrick’s caddie. They are a tight, fiercely loyal unit, and among Patrick’s roles is to cook for his team. Just behind his chair was a black BBQ on which he had already charred a variety of meats during their time in Maui.

Taking a swing of his cola, Reed continued to consider the query at hand: What separates the players who win from those who don’t?

“That’s hard to say,” he finally said. “It’s not swing mechanics or anything like that. It’s something you have inside.”

OK, but what gives a player that mysterious something?

That was evident five days later, when Reed stole the Tournament of Champions with an audacious display of will and want. He never had his best stuff across four rounds at Kapalua’s Plantation Course — variously describing his play as “mediocre,” “okay,” “hot and cold,” “so-so,” “up and down,” and “not quite right” — but he came through when it mattered most.

Four back of Jimmy Walker with four to play, he birdied the 15th hole and then on the par-4 16th he holed-out an 80-yard wedge shot for a game-changing eagle. Yet Reed had battled his putter all week, and on the 17th hole he yanked a 3-footer, making a bogey that would have broken a lesser player.

Reed responded with a clutch birdie on the 72nd hole, and when Walker made a messy par on the same hole they went to sudden death. A couple of loose shots in the playoff ultimately left Walker standing on the edge of the green, watching Reed line up an 18-footer for birdie and the victory.

He had to know he had given the wrong guy new life. 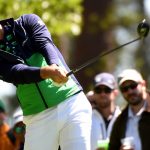 You may also like Tournament of Champions Best Quotes of Week

“He gutted it,” Walker said, with grudging admiration. It was the first time all week Reed had been in the lead by himself.

For Reed, 24, this was the fourth victory of his upwardly mobile career, and his third in less than a calendar year. It might be the most satisfying of the bunch because he prevailed with nothing close to his A-game.

“You know,” he said, “the reason why I was able to pull it off is mentally and course management…was just so good this week.”

Reed’s game has no weaknesses, but his head and heart are his greatest assets. Winning became a habit at an early age. His father always made him play up an age group, so as a seven-year-old he learned how to beat nine-year-olds, and he just kept going.

At University High in Baton Rouge, he led his team to two state championships. At Augusta State he carried an underdog program to two NCAA championships, going 3-0 each year in the match play finale. In 2012, Reed fought his way onto the PGA Tour through Monday qualifying, the Darwinian shootouts in which up to a hundred players are gunning for four spots, with a 65 or lower usually required to secure one of them. It is there that Reed forged more heavy mettle.

“You have to be super-aggressive and play with no fear,” he said. “You really learn to trust in yourself.”

Reed says he still brings that same mentality to every final round. Walker is a tough competitor who late in his career has learned how to win, but on the back nine his hard-won self-belief seemed to vanish.

“Yeah, you feel pressure,” Walker said when it was over. “I mean, geez, you’re trying to win a golf tournament. So yeah, you feel pressure. That’s what you’re out here to do, to get in that spot. I’ve been there, done that, and you handle it the best you can when you do it.”

Reed was the one who handled it best on Monday, something he had all but predicted four nights earlier on the lanai. He was talking about crunch time in general and his inspired play at the Ryder Cup in particular, but the same mojo carried the day at the Tournament of Champions.

“I don’t know why, but I just love when the pressure is on,” Reed said, unable to swallow one of his boyish grins. “It gets me fired-up and focused and I cannot wait to hit the next shot or the next putt. It’s an awesome feeling when you get the job done. And then you can’t wait to do it all over again.”